Slides and climbing frames connect brightly coloured playrooms in this kindergarten by Crossboundaries, set within a formerly derelict building in the financial district of Zhengzhou, China.

The Soyoo Joyful Growth Center occupies one of a trio of disused buildings in the city's new financial centre, which was masterplanned by the late Japanese architect Kisho Kurokawa in the early 2000s.

The cylindrical buildings have remained untenanted since they were built as a business centre 10 years ago.

The challenge for Beijing- and Frankfurt-based Crossboundaries was to repurpose one of these buildings, but to also maintain international standards for pre-school environments. The team did this by adding a "subway system" of brightly coloured tubes through the structure, opening up new routes where children can safely negotiate the space.

"Amidst the rising trend of learning through play, this novel and holistic program positions Soyoo as the leader in the booming market for children’s recreational facilities," said the architects.

"While regulations for conventional educational facilities were well in place both internationally and in China, placing this program in a large existing structure required a new spatial typology."

The five coloured tubes are cut through the building at different angles, breaking up the regimented floor plates. The tubes jut from the facade to form bay windows.

The play areas set within are finished with primary-coloured and faceted apparatus including climbing frames, slides and a ball pit.

"Similar to a subway system, these tubes intersect and lead children to different parts of the building," said the studio. "A child begins in a colour tube, allowing its interest to guide it through various fields of knowledge and explore their interconnections."

Several entrances in the curving facade lead into the lobby, which contains play areas and a swimming pool, as well as children's shops.

Rooms for art, music, dance, reading and other subjects, are set on the second floor. Further classrooms are located on the third floor, which also hosts a planetarium, a greenhouse, and a kindergarten. Above, the flat roof is used as a playground and features a running track.

The architects were asked to preserve some aspects of the external facade, which is clad in stone and aluminium to match its neighbours.

But they felt this materiality didn't lend itself to a children's facility, so they added a double layer of lightweight ropes that run diagonally between the roof and the ground. The colouring of the ropes corresponds with the interior palette."They diminish the original building's rigidness and add richness without blocking any light," said the studio. "People weave around between the old facade and new ropes facade, touching them as they vibrate with the wind."

The kindergarten opens onto a large plaza with planting and seating, which is hoped will attract people to the area.

"The building as a whole creates coherence and connections within the community, adding vitality to a long disengaged residential neighbourhood," said the architects. 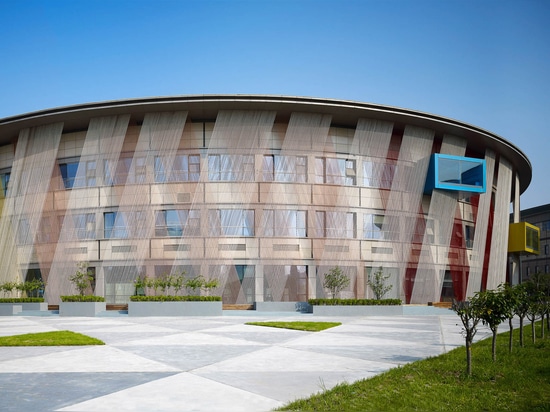 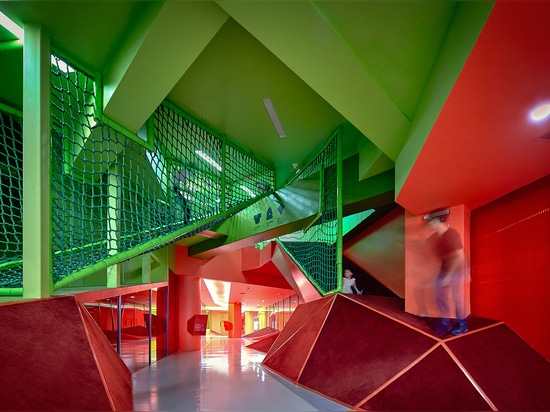 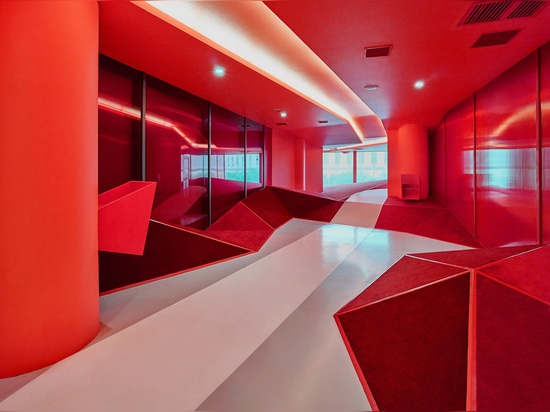 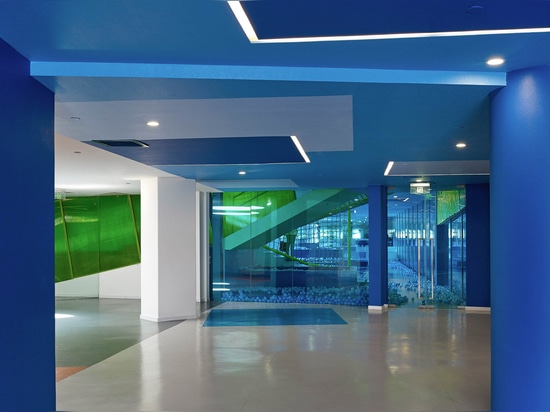 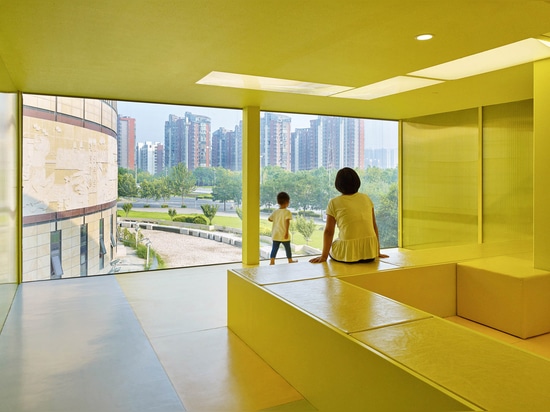 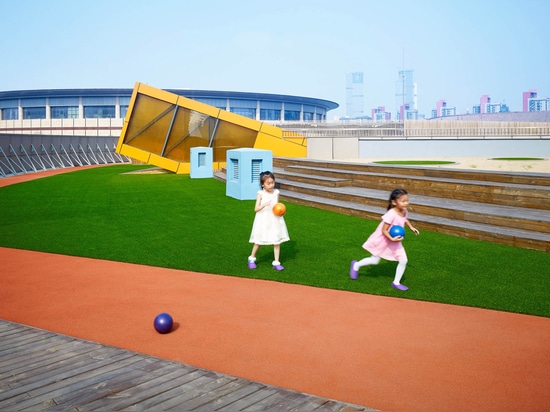