Architecture studio Tengbom has added a zinc-clad extension to a traditional brick courthouse building in the Swedish town of Alingsås.

The addition to the Alingsås District Court is designed by Swedish firm Tengbom to offer a contemporary counterpoint to an original brick building designed by architect Adrian Crispin Pettersson and completed in 1899.

The courthouse is situated in a residential neighbourhood close to the town centre and was previously extended in the 1950s, when a new brick wing was added.

Having identified a need to expand again, the District Court originally commissioned architect Börje Falemo to draw up plans. They later invited Tengbom to rework the design, adding a more contemporary aesthetic.The studio – which has previously designed a woodland trail centre covered in giant shingles and a student home measuring just ten square metres – responded with a solution that references the steeply pitched roofs of the surrounding buildings.

The design also includes contemporary interpretations of traditional details, including a saddle roof and curved bay windows.The architects chose to use zinc because of its robustness, which makes it suitable for both walls and roofs with flat and sloping sections.

The material is applied as exterior cladding to the thin curtain walls, resulting in a homogenous volume that helps to clearly distinguish the new structure from the original brick building."Zinc is a fine old classic material which was used extensively as roofing during the last century," explained Magnus Almung of Tengbom. "We simply brought it down onto the facade and it fits beautifully with the granite foundation wall, which is a common denominator for both buildings."

The material gives the extension a bold appearance without dominating the existing District Court building according to Tengbom, which describes the addition as "a monolith in zinc".

"Monolithic buildings are typical these days, with the same material for walls and roof," added architect Fritz Olausson. "You can even see buildings without eaves."

"In the same way, saddle roofs have come back into fashion in the past few years, something we didn't see much of previously. The difference is perhaps that this building is constructed using craft techniques that are the same as at the beginning of the 20th century."

The building's walls are clad from base to ridge with the standing-seam zinc panels. Over time, the zinc surfaces will develop a patina similar to the weather-worn brick facades of the adjacent buildings.The use of panels with four different widths enabled the architects to create a variegated pattern that accommodates windows at points determined by the internal lighting requirements. Zinc-clad doors are also integrated seamlessly into the pattern.

Inside the building, the steeply pitched roofs are translated into high vaulted ceilings in two new courtrooms located on the upper store.Internal walls are lined with wood panelling that forms a warm, neutral backdrop to the space. The flooring and fitted furniture are also made of wood, creating the sense that the stands, desks and judge's bench are an extension of the floor.

"The interiors need to be beautiful and dignified, since life-changing events will take place here," said interior designer Karin von Geijer. "The rooms must be perceived as neutral as much by the public as by the parties and witnesses."Windows that allow natural light to enter the courtrooms can be covered by curtains for cases when privacy is required. The spacious feel of the rooms is maintained by specifying seats with semi-transparent textile backs. 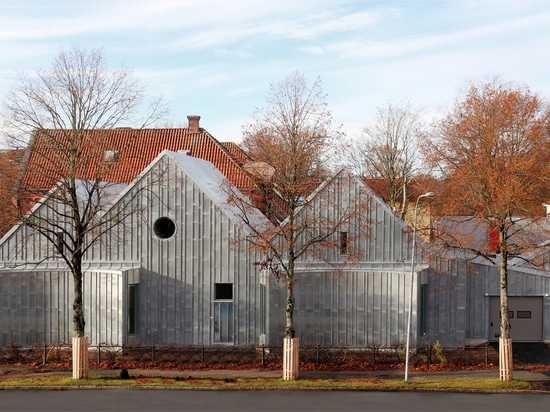 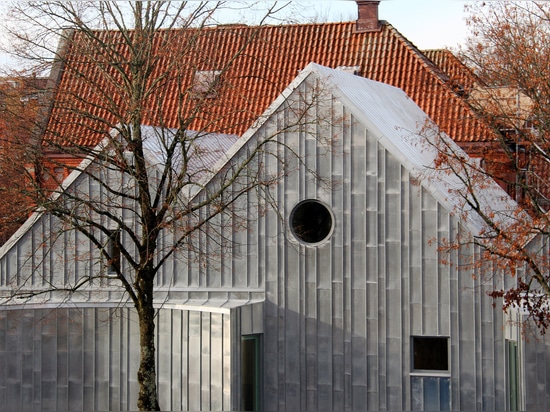 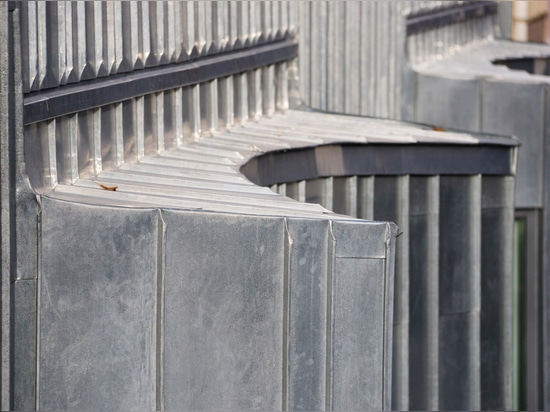 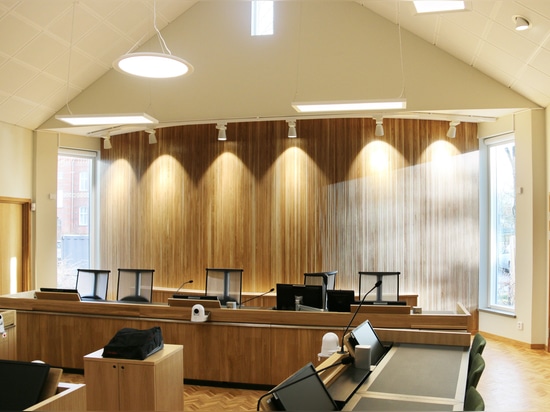 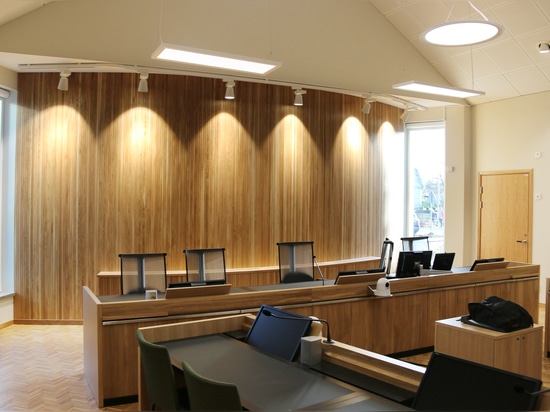 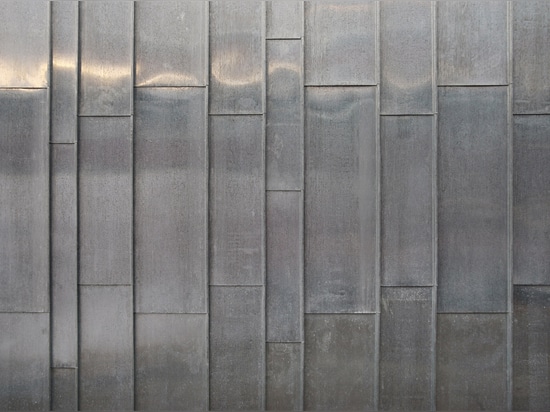