Developing of the canteen in Gehry's Vitra Factory Building having a design that aims to bring warmth and diversity.

A factory hall is one of Frank Gehry's three contributions to the Vitra Campus at Weil am Rhein in Germany. Twenty-five years after its completion, Swiss architect Aurélie Blanchard has revamped the building's canteen (+ slideshow).

Canadian architect Frank Gehry completed the Factory Building for Vitra in 1989 – the same time as the celebrated Vitra Design Museum and the smaller Vitra Design Museum Gallery – at the campus that has now become a popular tourist attraction for the brand.

Swiss architect Aurélie Blanchard was this year commissioned to restyle some of the building's interiors, starting with the canteen.

Her aim was to inject a more homely atmosphere into the industrial space, introducing some of Vitra's popular furniture and homeware items alongside low-level lighting and foliage.

"The brief was to bring to the existing canteen space the domesticity one would find in a proper restaurant while respecting the industrial and communal character of the room," said Blanchard, whose past projects include a copper-lined Basel restaurant.

"The design aims to bring warmth and diversity whilst keeping a high sense of minimalism and abstraction through the device of monochromy," she said.

Most of the space is taken up by a series of long canteen tables that span the whole width. Beside these, the architect has added a variety of different Vitra chairs that vary from Charles and Ray Eames' DSW Chair to the Basel Chair by Jasper Morrison and Ronan and Erwan Bouroullec's plant-inspired Vegetal.

All of the chairs are black, helping to tie together the different styles while also contrasting with the oak tabletops.

"The mixture of their different lines and style is unified through their black monochromy," said Blanchard.

"The iconic chairs are thus being reduced to the essence of their silhouettes, whilst the horizontal planes of the large communal oak tables bring an element of warmth and domesticity."

Cushioned seating runs round the room's perimeter, while high-back seating creates a more comfortable dining area in one corner.

Vitra's Corniches shelves create a space for plants along the walls, which have been painted in a subtle shade of green, and low-hanging bell-shaped pendant lights – designed by Finnish architect Alvar Aalto in the 1930s – contrast with the industrial lighting above.

Aurélie Blanchard is now working on some of the other spaces in the building, which contains offices, production rooms, a showroom and a test centre.

Other recent additions to Vitra's famous campus include a fictitious home by Studioilse, a micro-home by Renzo Piano and a combined viewing tower and helter skelter by artist Carsten Höller. The site is best known for Herzog & de Meuron's VitraHaus showroom, as well as buildings by Tadao Ando, Alvaro Siza and Zaha Hadid. 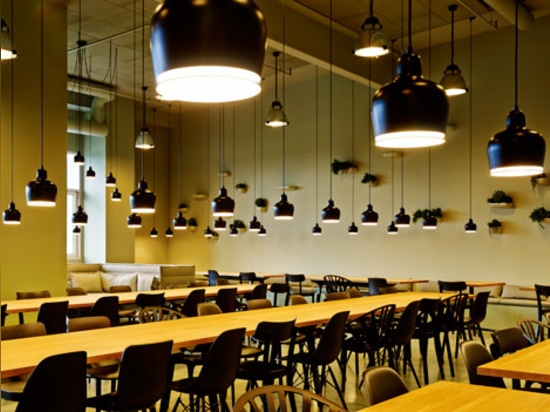 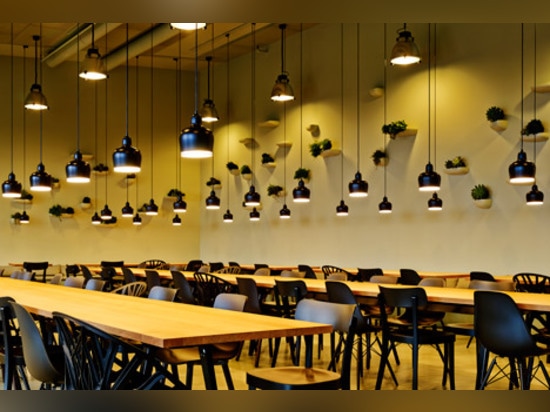 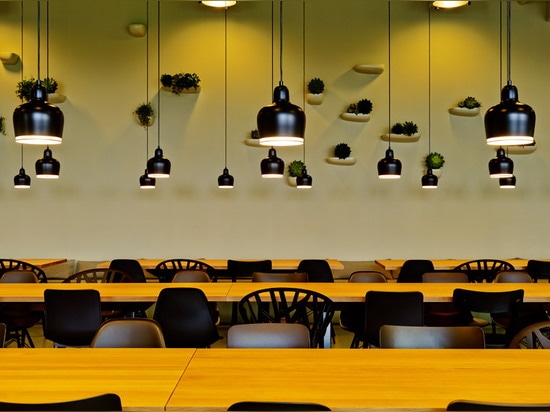 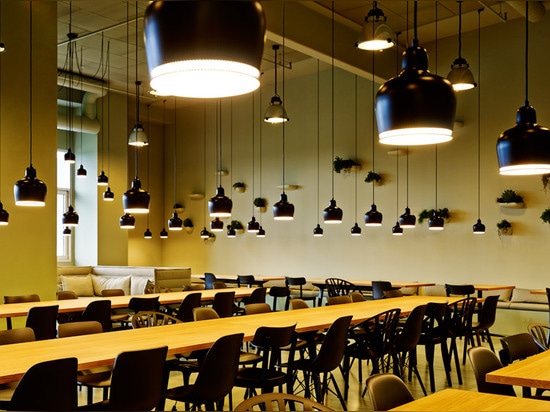 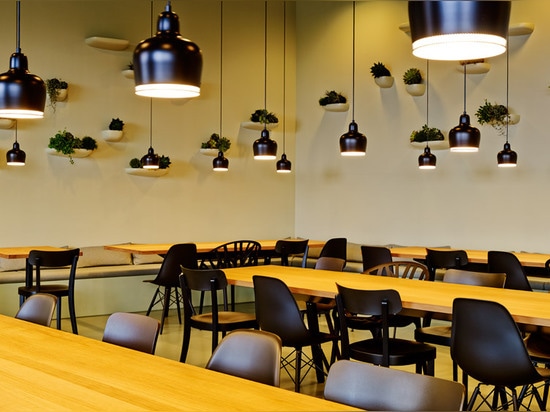 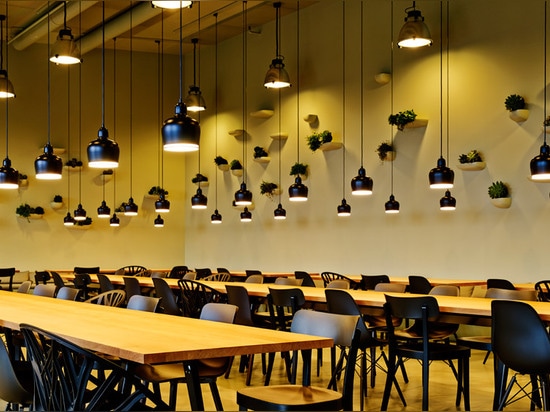