France is investing in social housing, museums, schools but also in swimming pools and hospitals: for today’s Best of 10 projects among the ones published on Domusweb.

Schools, social housing, swimming pools, museums non only in Paris. French policy is responding to some of the country’s social problems and looks at the future through investments in education.

– Made almost entirely of prefabricated elements, the residential complex signed by Lacaton&Vassal in Mulhouse, France, has a markedly industrial look and big, flexible interiors, easily customizable by each of the 59 inhabitants.

– With indoor patios, nursery spaces, naturally lit classrooms and a long cantilivered area, Dominique Coulon & Associès designed a colorful group of schools in Montpellier, connected with each other.

– With this collective houses in the suburb of Bordeaux – prefabricated and ornamented with industrial motifs and nonetheless fundamental in the definition of the public space – LAN shows that something radical can be expressed even by using a simple architectural language.

– The circulation of energy, flows and light shapes this swimming pool near Paris, designed by Mikou Studio in a spirit of fluidity and openness.

– The two completely different facades of this building, designed by inSpace Architecture to host social housing and a mother and child welfare center, reflect two distinct aspects of reality: life on the boulevard, and life in the heart of the city block.

– To integrate this healthcare centre in the French countryside to the rural environment Samuel Delmas took inspiration by the shapes of the surrounding houses and by the tones of the Nozay’s blue stone.

– For the extension and renovation of Centre national des arts du cirque in France the architects § Caractère Spécial, in partnership with NP2F architectes used a natural coloured Eternit-type fibre concrete to unify the facades of the new and old buildings.

– Herzog & de Meuron extended the Musée Unterlinden in Colmar, France, through a urban configuration and architectural language that fit into the old town and yet appear contemporary.

– A perforated metal veil forming a regular diamond pattern wraps the minimalist interiors and raw materials of the dance studios of this school, inserted in the urban context as an unusual object, capable of arousing perplexity and curiosity of the passersby.

– In the heart of Paris’s 15th arrondissement TVK created three buildings, each comprising two distinct programmes, that construct a picturesque system interacting powerfully with the extremely heterogeneous architecture of this area. 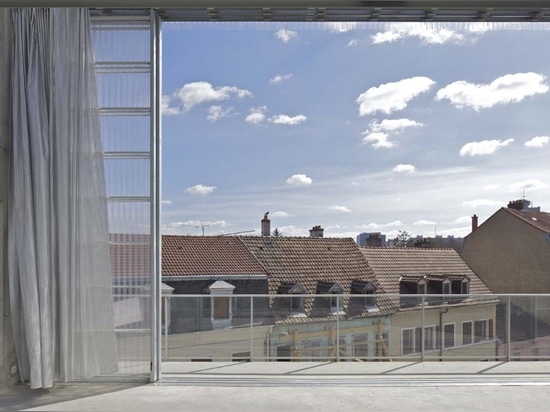