The Bruce C. Bolling Building in Boston by Mecanoo

Amid the profusion of new buildings that claim to be spreading their own mini-Bilbao effect to run-down neighbourhoods – often it seems through a whacky name or shape alone – the new Bruce C. Bolling Municipal Building in the Roxbury district of Boston, USA, designed collaboratively by Mecanoo and Sasaki Associates, looks set to be the real deal. Utilizing and extending the shell of an old landmark building and housing a new headquarters for the Boston Public Schools service, bringing the footfall of 500 public employees to the area, as well as valuable new retail space, this building should provide a real engine for regeneration in an area still economically hollowed out. Nathalie Janson assesses its potential.

At the heart of a municipal effort to revitalise Roxbury – a Boston neighbourhood with a turbulent history of growth, white flight, redlining, blockbusting and urban renewal – is the Bruce B. Bolling Center. Designed by Sasaki Associates and the Dutch design firm Mecanoo, this 65,500-square-metre building, the new headquarters for the Boston Public Schools (BPS), commands the corner of Washington and Warren, two major thoroughfares in the neighbourhood. Its striking wedge-shaped Baroque Revival façade, which once belonged to the flagship store of the Roxbury-based Ferdinand & Co, is an important landmark in Dudley Square, Roxbury’s commercial centre. At the time of the store’s opening in 1885, Dudley Square was a bustling shopping destination, accessible to Bostonians by streetcar and later an elevated train that pulled in at the store. The economic climate changed dramatically in the late twentieth century: the Ferdinand closed its doors in 1979, the railway line was rerouted to the edge of the neighbourhood and the square was hollowed out after a series of arson fires.

Thirty-six years later, the Ferdinand Building is back in business as the Bruce B. Bolling Center. The City of Boston hopes that the new complex will act as an economic catalyst for Dudley Square, which is still largely characterised by vacant lots. The arrival of more than five-hundred BPS employees will increase foot traffic and spending in the area, support existing businesses and encourage new commercial activities in the neighbourhood. The building is also the cornerstone of a larger effort to revitalise Roxbury, championed by the late Mayor Thomas Menino. The city’s 123.9 million USD investment in the Bolling Center – in addition to investments in a new police station, renovations to the public library and other streetscape improvements – signals to the private sector that it, too, should feel safe investing in Roxbury, especially as Boston sets out to increase its housing stock by a fifth by 2030.Design-wise, the Bolling Center is sensitive to its surrounding context. With ornate brick infill and careful attention to detail, the building unites the Ferdinand, as well as two other existing structures, the Waterman & Sons building and Curtis Block, in a design that blends the new and the old; the working space of BPS checks all the boxes of a hip, collaborative workspace, with folding accordion windows and a light installation marking where the tracks of the former elevated rail used to run. Despite being the tallest building in what is mostly a low-rise residential neighbourhood, the building does not overwhelm; the mass of the building is tempered through a series of green roofs, which are set back from the façade, and if private development in Dudley Square picks up, as the city hopes, the height of the building will no longer stand out so prominently.

The building is also open and transparent. A grand staircase cuts through a large, open ground-floor space, which opens out to the Dudley bus station and is surrounded by 18,000 square feet of retail space. Tenants have not been confirmed yet, but there is hope for a destination restaurant and other businesses that will be open at weekends and evening when the building is closed; some want to see the retail spaces more directly benefit local businesses, like the community eatery Haley House. On the second floor, the Roxbury Innovation Center, managed by Venture Café and Skylab, will share common spaces with families served by the municipal centre. Crowning the building is a large deck on the rooftop of the old Ferdinand that will be open to the public during the building’s opening hours.

Looking out from this deck over Lower Roxbury, which was bulldozed to make way for the never-built inner expressway, and towards moneyed Back Bay and downtown Boston, it is clear that the development of the city remains uneven. When Dudley Square was still covered in the remains of the earlier two metres of snow that had fallen on the city in February, people shuffled behind large snow mounds and some businesses remained temporarily closed due to still poorly cleared sidewalks and a lack of customers. For while Boston reeled from the unexpected barrage of the snowstorms, public services in Roxbury are generally subpar even for the city. In the summer, there is more uncollected rubbish in Roxbury than elsewhere in Boston. The buses that replaced the elevated rail system are slow and cumbersome; while inadequate parking has left residents and employees bracing for what in the overstatement-heavy Bostonian parlance is called a “pahking Ahmahgeddon.” When snow paths are wide enough only for a single person, it is hard to imagine more than five hundred BPS employees trying to navigate around Dudley Square. It is too early to tell what economic and social impact the building and any ensuing private development will have on the neighbourhood. In the meantime, the City of Boston still has its work cut out to regenerate it – but the Bruce B. Bolling Center is a step in the right direction. 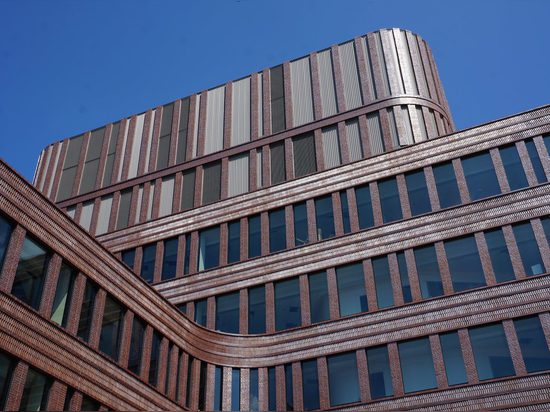 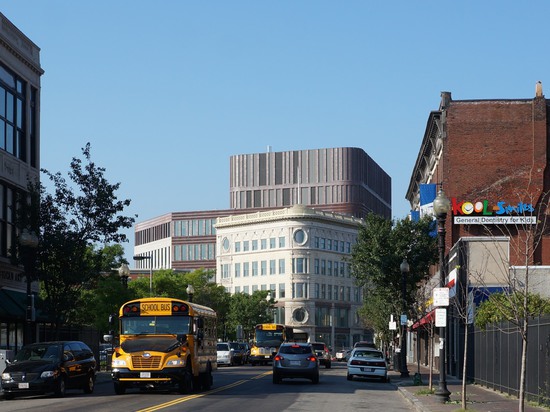 The building sits in the centre of Dudley Square, the commercial core of the residential neighbourhood of Roxbury. 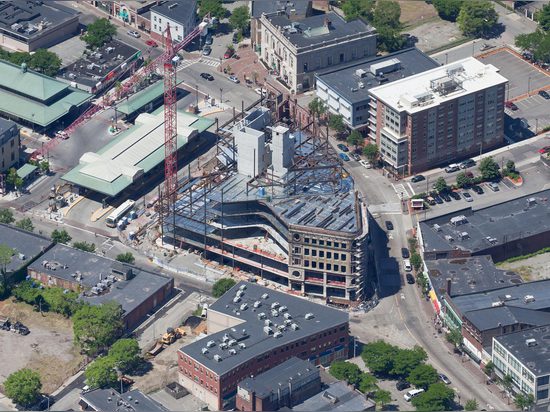 The Dudley Square area in Roxbury, despite being a historically and socially rich area, is still characterised by a number of open lots. Immediately behind the Bolling Center is the Dudley Square bus hub. 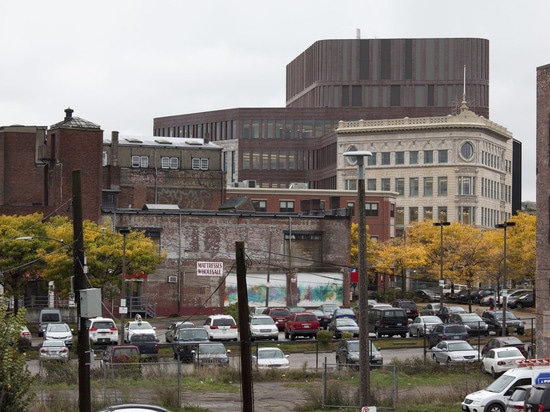 The area however still functions as a commercial hub. This former factory building next to the Bolling Center, houses Mr. G’s Plaza, a long, open space packed with small businesses, many owned by Ethiopians, Somalis, and West Africans. 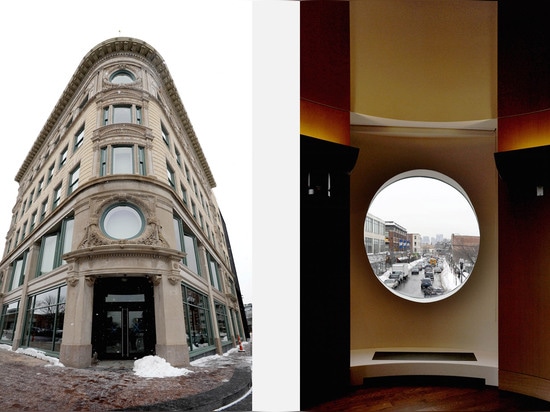 On the corner of Warren and Washington stands the Ferdinand, a department store that closed down in 1979, and long a neighbourhood landmark. (Photos courtesy City of Boston) 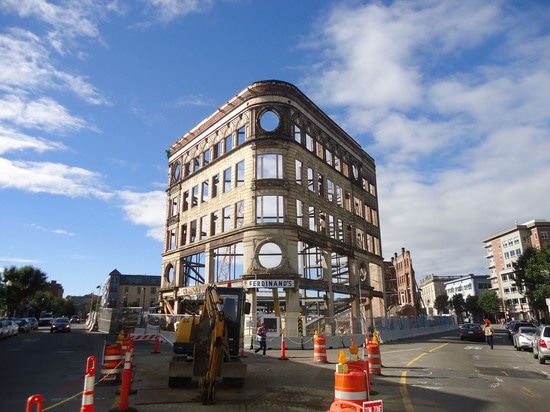 The façade of this old store was incorporated into the Bruce C. Bolling Municipal Building