Pro bono, which literally means "for the good," is increasingly seen in the world of architecture as a source of excellent design. Many firms accept pro bono commissions as a means of expanding their creativity, recruiting and retaining employees, and creating strong ties with a community. Boston's Ruhl Walker Architects traveled all the way to Hawai`i for a pro bono project with the non-profit Hawai`i Wildlife Center, which protects wildlife on the islands

This project was designed on a pro bono basis for our non-profit client. I was the second architect willing to design for free, the first architect having disappeared. I met the director of the HWC via an online donation after a trip to the islands with my family, and all I did to get the job was to say “yes” when asked if I would help them design their new facility.Please provide an overview of the project.

Our non-profit client operates Hawai`i's first wildlife recovery and rehabilitation center in North Kohala, on the Big Island of Hawai`i. The organization is dedicated to the islands' endangered native wildlife through hands-on treatment, research, training, and scientific, environmental, and cultural programs. The structure consists of three integrated components: a treatment facility, a native species garden propagated and maintained by a neighboring school, and an open-air lanai and pavilion for educational and community outreach. The response facility includes a sequence of spaces specifically designed for the treatment of birds during man-made disasters such as oil spills.

The building's form is an abstraction of the archetypal Hawaiian plantation architecture, with a planar front elevation concealing simple shed- and gable-roofed volumes behind. In its materiality, the horizontal siding references vernacular cladding, but variations in the siding dimension and spacing allow the building to be entirely naturally cooled by the steady trade winds. The facility operates on a net-zero basis annually thanks to a rooftop PV (photovoltaic) array.

The HWC director and I worked side by side to determine the ideal sequence of spaces and critical adjacencies. The building’s form grows directly from that effort, but also responds to natural forces such as solar orientation and prevailing trade winds. The HWC director and I also researched precedent facilities in the San Francisco Bay area (none existing in the islands) and through an international network of wildlife emergency response experts.

Were there any significant challenges that arose during the project? If so, how did you respond to them?

Design was completed just before the Lehman Brothers collapse in 2008, so therefore the project had to be fundraised for during many years of terrible economic downturn. We helped with fundraising by providing renderings and marketing materials, and when there was enough money on hand to build the HWC shell we did so. While the building shell was being built, we continued to facilitate the HWC staff with fundraising support. Many years later the HWC opened! A real labor of love by so many.How does the building relate to contemporary architectural trends, be it sustainability, technology, etc.?

The HWC is a non-profit with limited funds so we were unable to document how “green” the design is, other than it operates on a net-zero basis since opening. So, despite it being trendy to brag about being LEED-certified, we can’t do that, other than we did all we could to design a LEED-certifiable building. We aren’t terribly interested in trends, so don’t find this building trendy per se, other than it takes its siting and location incredibly seriously, and that is becoming the norm again! Like a lot of our work, every space has multiple functions and uses, materials and details are contemporary riffs on time-tested norms, and the facility expresses its serious and critical mission.

How would you describe the architecture of Hawai`i and how does the building relate to it?

One of the most noteworthy aspects of Hawaiian architecture is that it tends to really respect its natural setting. Shade is incredibly important, as is Airflow, and many spaces can be designed without walls or windows, completely open to the elements. As with most architects who design in Hawai`i and care deeply about what they are designing, we worked hard to orient the facility to benefit from the natural trade winds as well as solar orientation for rooftop PV. Instead of air conditioning every space, we relied primarily on natural and mechanical ventilation and created several large spaces that are either completely or mostly open-air; this includes a large open air “lanai” (gathering space), an education pavilion, and a triage porch. We also utilized deep overhangs to create additional exterior circulation paths that allowed our interior footprint to be minimized. The HWC is very Hawaiian in that it allows the user and visitor alike to appreciate the magnificent Hawaiian climate. 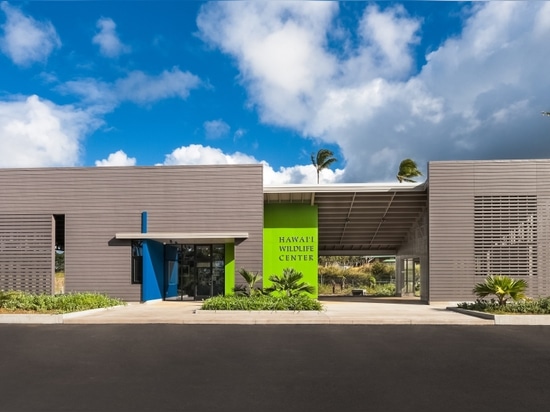 View of entrance from parking 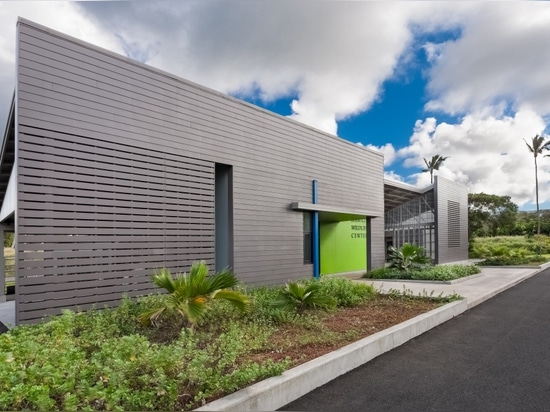 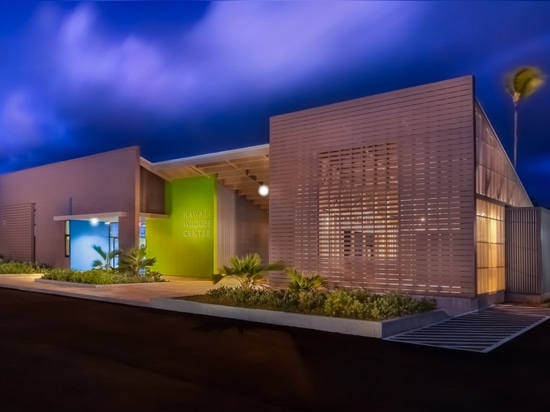 View of entrance at dusk 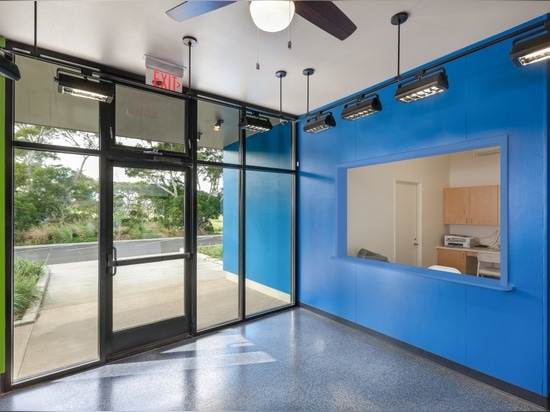 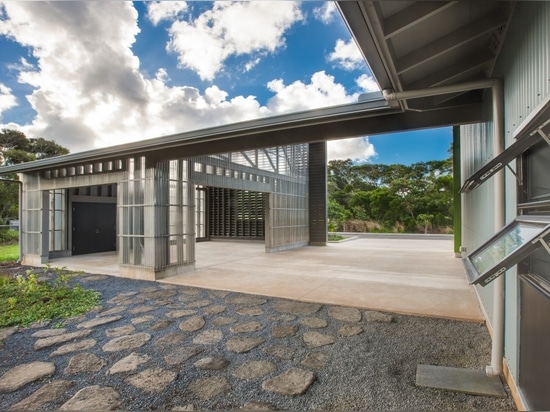 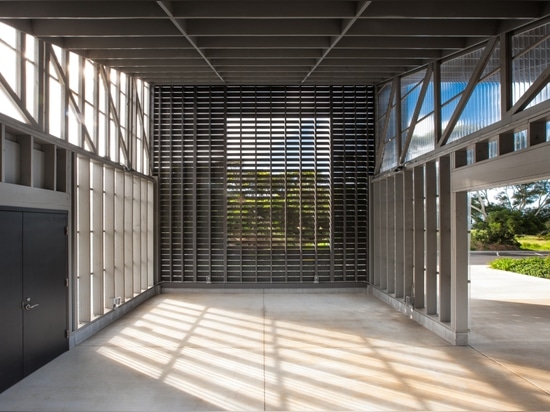