As we've explored elsewhere, architecture students learn as much from the environments they work in as from their professors, so its no wonder that architecture schools pay attention to their "spaces for learning"

One area that is particularly important is teaching the creative and sustainabile reuse of old buildings. Such is the case for the expanded home for architecture students at the University of Arkansas in Fayetteville, designed by Department Head Marlon Blackwell with Polk Stanley Wilcox. The Vol Walker Hall & the Steven L Anderson Design Center opened in August 2013, just in time for the fall term. The architects answered some questions about the project.

The Reynolds Foundation, a major donor to the University of Arkansas, agreed to consider the addition to the architecture school, but allowed only six weeks to prepare a preliminary design. This precluded the possibility of an open RFQ (Request for Qualifications), instead requiring the University of Arkansas to turn to architects with immediate knowledge of the school. As Department Head of the School of Architecture and a Distinguished Professor, Marlon Blackwell had a keen understanding of the challenges and limitations facing the school. His eponymous firm partnered with Polk Stanley Wilcox Architects, an acclaimed firm from Little Rock, Arkansas, which had previously conducted studies on the expansion of the architecture school. After the Reynolds Foundation approved the design and provided a $10 million donation to fund the addition, they stipulated that the design team remain intact for the project, resulting in the ongoing partnership that produced the design.Please provide an overview of the project.

The Steven L. Anderson Design Center, a 37,000 square foot addition to Vol Walker Hall, designed by a collaboration of Marlon Blackwell Architects and Polk Stanley Wilcox Architects, is intended to be a modern complement to the traditional architecture of Vol Walker Hall, sensitive to the past without being imitative of it, and conceived to enhance the spatial character of the historic campus plan. To achieve these design goals, the addition was conceived in plan and massing to harmonize with Vol Walker Hall’s proportions and spatial configuration. The footprint of the addition replicates that of the traditional structure’s entry (eastern portico) wing, physically and conceptually balancing the old and the new.Similarly, regulating lines established by the classical composition and rigorous proportions of string courses, cornice lines, traditional fenestration and moldings of Vol Walker Hall generated the organizational system for articulating and sizing the Indiana limestone panels that clad the north and south walls of the Anderson Design Center and the sleek fritted-glass panes, designed to ameliorate the harshness and heat of western light, that comprise its curtain wall. A visual sliver of glass in the north and south elevations, the transparent wells of its new fire-stairs, creates a respectful seam that negotiates the addition and the original structure from the exterior, yet, from the interior, frames and underscores the carefully calculated relationships between the two. Meticulously fabricated architectural concrete, together with the contextually fitting stone cladding, vest the addition with a gravitas, a feeling of weight and substance that honors its historic counterpart.

Vol Walker Hall is located at the heart of the University of Arkansas campus, adjacent to Old Main which is the oldest building on campus, establishing the eastern end of the main campus axis. As a result, the addition needed to be sensitive not only to the original building but the presence of Old Main as well. Very early in the process, constraints were identified that bounded the height and width of the addition, relating it to the proportions of the main bar of Vol Walker, creating a balanced composition that does not compete with the primacy of Old Main.

The addition needed to act didactically with the old building to be an educational tool for students to understand the evolution of building technology and construction, especially as it relates to ideas about form, material and space. In particular, the addition is conceived as having a reductive figural presence, acting as an inversion of the figure ground relationship of the original building’s elevations where the profile of the addition acts as the figure and the fenestration acts as the ground.

From the very beginning of the planning process, the design team reached out to the students in the Fay Jones School of Architecture, who were interviewed extensively in the programming process about their needs and preferences for the new school of architecture. A number of students volunteered to be involved in the process and they brought their unique perspective to the building design. Throughout the design process, progress meetings were held that kept the student representatives informed and gave them an opportunity to provide feedback on the design. Several key features resulted from these sessions, including decentralized plotting and scanning, as well as a dedicated student government office and student lounge.In a similar way, all of the faculty and staff were interviewed during the programming phase to determine their aspirations for the building at large and its key spaces, as well as detailed information about perfomative aspects of particular spaces such as classrooms, digital fabrication labs, or other instructional areas. An extensive effort was made to inform the faculty and staff about the varied nature of offices available to them. From this process, the existing building in particular was designed to use as many of the operable windows as possible for use in faculty offices to prevent the possibility of offices without windows. In a number of locations existing offices were reconfigured to reduce or eliminate inequities between offices for greater parity. The faculty also were a great resource in critiquing the design itself, as they are uniquely qualified as architects, landscape architects, and interior architects.

Beyond the University of Arkansas, the design team engaged the State Historic Preservation Office to ensure their involvement and approval of the renovation of and addition to Vol Walker Hall. John Mott of John Milner Associates served as our preservation consultant and happened to be the son of the original architect of the building. He worked closely with the University of Arkansas and the state preservation office to ensure the design not only complied with any applicable regulations, but also met the spirit they intended. What resulted was a seamless exchange between the architect, client, and regulatory agencies, working together to breathe new life into an historic structure.

Currently tracking LEED Gold, the Steven L. Anderson Design Center features a west-facing fritted glass brise soleil that screens the intense western sun. Behind the brise soileil and at a number of other locations, high performance glass is sued to ensure the thermal performance of the highly insulate building envelope. The concrete structure of the addition provides considerable thermal mass that helps balance the temperature swings associated with thermal gain, a common problem in the widely varying climate of Arkansas. Individual control over mechanical systems is provided wherever appropriate using cassette systems.Unique to the school of architecture is the direct integration of both digital fabrication labs and computer labs, provided in close proximity. Students now have direct and convenient access to a state of the art computer lab with numerous programs that support innovation and experimentation. Visible from the computer lab, and advanced fabrication lab includes a wide variety of digital tools including laser cutters and CNC routers that make the construction of intensely complex forms made possible by advanced software. The architecture school was also the first project delivered through Integrated Project Delivery using BIM at the University of Arkansas.

How would you describe the architecture of Arkansas and how does the building relate to it?

Architecture in Arkansas, like most areas in the mid-American South, varies wildly between the commercial, institutional and residential, with a whole range of styles present from the classical to the postmodern. In this case, the original building is classical in nature, its Beaux Arts details and organization appealing to universal principles and is essentially impervious to local influences or vernacular architecture in Arkansas. The addition responds to these same universal ideas, adopting the proportions and materials of the original building, while subtly responding to local conditions by opening to the distant southern view of the Ozarks and shielding the western elevation from the intense late day sun, for instance. This is a decidedly 21st-century building that is built on the post-war sensibility of contemporary architecture in Arkansas – extending the legacy of Edward Durell Stone, Warren Seagraves, and others – that aspires to be both universal and local. If anything ties these things together with architecture in Arkansas, it is the material culture and selective usage of materials like the abundant local hardwoods such as oak, walnut and cherry. 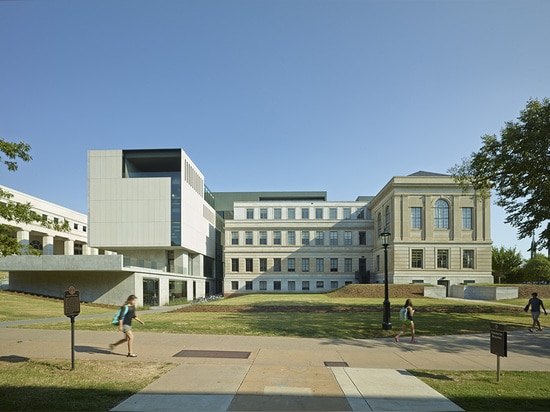 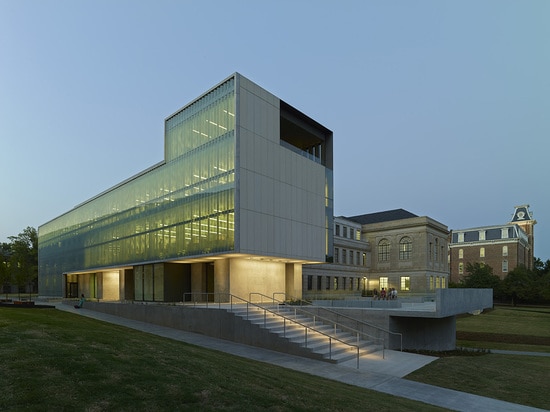 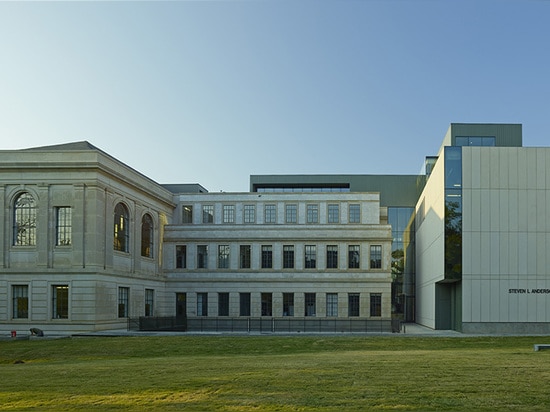 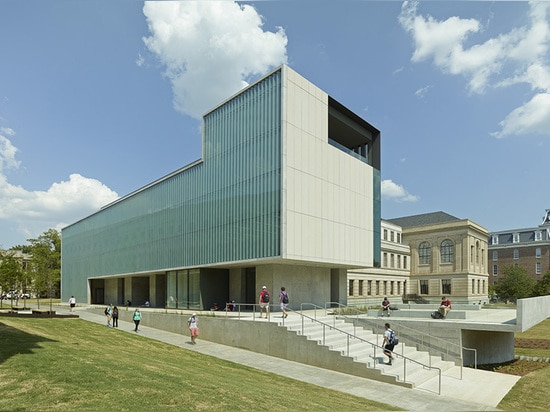 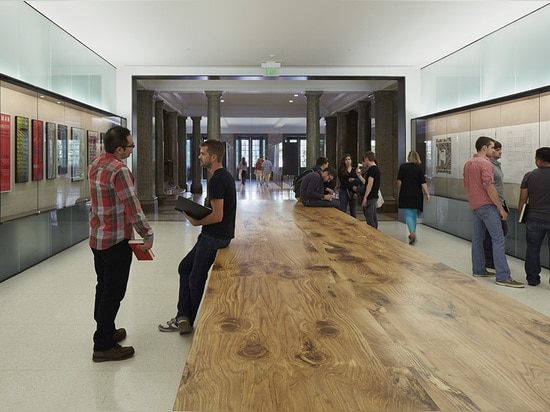 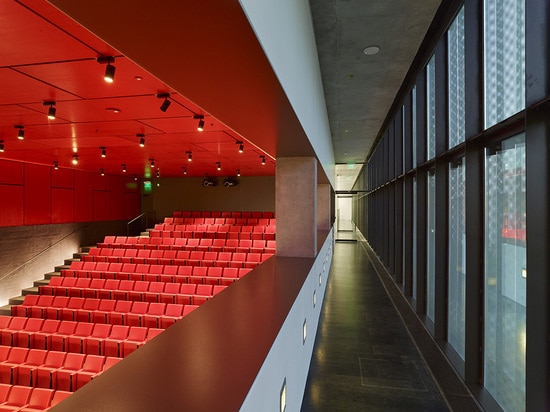