Miracle Box at the Beach

The port city of Yinkou is located half way between the cities of Shenyang and Dalian at the coast of Liaoning province. The new dockland area at the waterfront district Bayuquan, to the south of the old part of Yinkou, is directly situated on Liaodong Bay on the Bohai Sea. Yinkou is the second largest port in the northeast of China

At prefecture level, the city has almost 2.5 million inhabitants, of which about 300.000 reside in the new Bayuquan district. A major part of the shoreline is stamped by the infrastructure for the port facilities of Yinkou Economic and Technological Development Zone. South of the industrial area, an organic grid forms the new infrastructure of highways and streets for the urban development.

The major north-south urban layout is crossed by an east-west axis in the centre, which ends at the beach in a pedestrian circle. The Bayuan Crescent Beach is about five kilometres long and its facilities can hold about 40.000 tourists at the same time. The beach is flat, the water is clear, the sand is fine and the waves are slow. It is called an ideal and unique beach in the northeast of China.

The Vanke Group invited the firm of Vector Architects in summer 2012 for the design of their exhibition pavilion near the shoreline on the circular, green plaza that mediates between the beach and the urban development. Vanke is China’s largest mainland residential real estate developer and needed an appropriate space for its sales in the newly developing city.

Vector Architects took the challenge by creating a combined public-private space that intermingles the pleasures for tourists with terrific views across the ocean from the top two floors and the business activities of Vanke on the first and second floor.

In this way the Vanke Brand Centre became a public venue that is reflected in the design of the cubic building. The box-like form of the pavilion grows out of an organic shape created by a sloped landscape around the first floor. This integrates the building in the surrounding decorative green public space.

From the second to the fourth floor the exterior of the volume is cladded with timber veneer panels. The top floor consists simply of a huge open and public balcony, closed on two sides by the façade and a canopy above. The view across the public plaza to the north opens towards the beach and the pier that extents the urban axis into the sea. The view to the south goes across the new development of the city. The timber veneer of the east wall is perforated with circular openings, so that the diagonal early morning sun casts a dramatic and Dadaistic image across the interior space.

Vanke uses the ground and first floor for its business activities. They are directly accessible from the street in front. The ground floor consists of a lobby, exhibition space, offices and service space. The first floor is reserved for exhibitions. The second floor is fully occupied by the restaurant that is accessible across an outdoor ramp and an open staircase, cut out from the cubic volume. This entry allows visitors to reach independently the final open platform at the third floor.

The simple box stands like a piece of furniture at the urban plaza near the beach and signals to its visitors a relaxed feeling in the bustling atmosphere of new-town construction. It mediates between business and recreation – something that more and more becomes a real need for the hard-working people. The box is so far the only building at the circular public plaza and therefore coins like a small urban landmark the perception of the visitors. 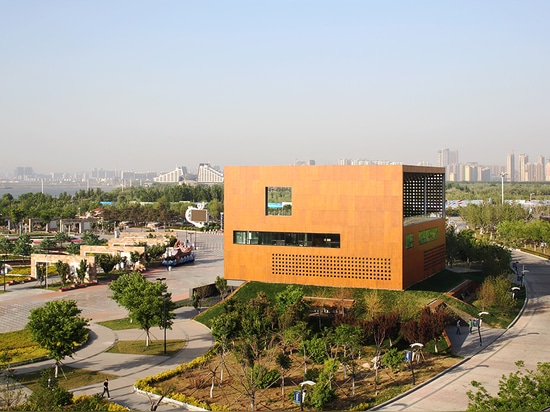 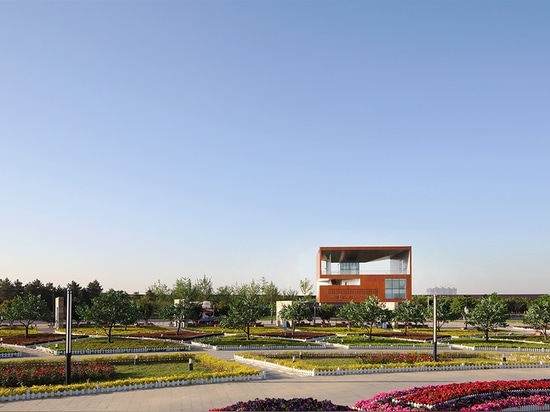 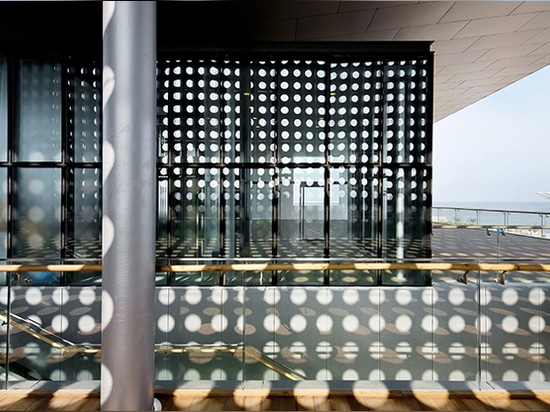 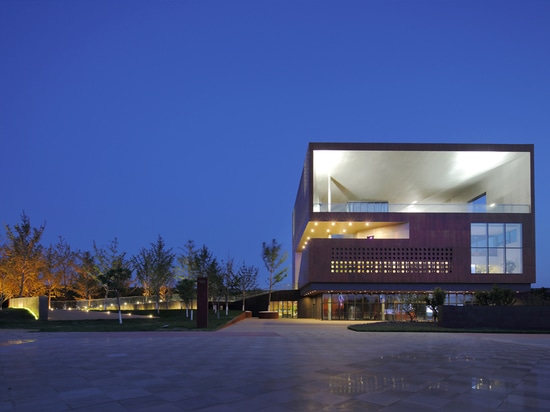 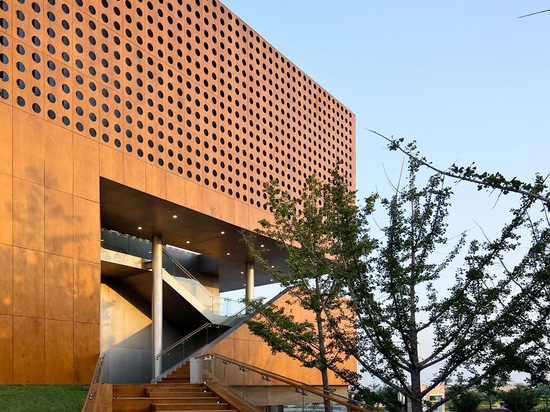 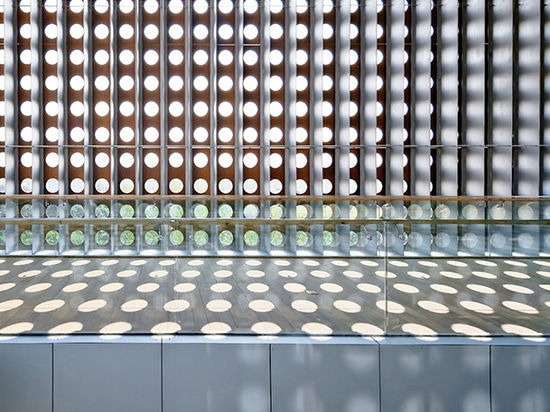