Circuit of The Americas (COTA) is a new auto racing facility in Austin, Texas, that hosts events like the Formula 1 U.S. Grand Prix™.

Architecture for motor sports runs the risk of being lost in the cars, crowds, and advertising, but Miró Rivera Architects' designs for the different parts of COTA embraces speed and gives it a strong expression in the midst of the cacophony. The architects provided us with some text and images on the recently inaugurated project.

The Circuit of The Americas is the first purpose-built Formula 1 Grand Prix™ facility in the United States. The architectural features of this new motorsports and entertainment venue include the Grand Plaza, the 6,500-seat Tower Amphitheater, the Main Grandstand, a 251-foot tall Observation Tower, ticketing buildings, concession areas and two bridges over the track. As the designers of the main public spaces and buildings around the 3.4-mile track, Miró Rivera Architects are responsible for the aesthetic and much of the experiential qualities of the site. Circuit of The Americas hosted its first major event, the 2012 Formula 1 United States Grand Prix, in November 2012.

The main architectural language of the facility evokes the precision, dynamism and performance-driven design of racecars. It is also visually stimulating, incorporating banners, billboards and bold graphics. The architects bring their innovative approach to the structural systems: rather than being concealed behind a building’s façade they are articulated and become significant parts of the design. An architectural theme reoccurring throughout the site is the use of red steel tubes. The tubes cascade down the side of the Observation Tower to form a canopy for the Amphitheater stage and also frame the Main Grandstand. Evocative of sports cars and movement, this element ties the structures together creating a consistent visual experience.

The Observation Tower serves as the centerpiece of the complex, which rises over the racetrack offering sweeping views of the entire venue, downtown Austin and the nearby Hill Country. The tower, a dramatic backdrop to the Amphitheater, provides a visual end to the Grand Plaza and also serves as a reference point for spectators throughout the site. Its observation platform at the top can hold up to 75 people and features glass railings and a glass floor. Inspired by the image of red streaks of glowing light that racecar tails leave behind in the dark, the Tower is built from steel and is composed of a white shaft with two sets of stairs wrapping around a high-speed elevator and a red “veil” formed pipes measuring eight inches in diameter. The “veil” flows down from the observation platform and fans out at the tower’s base to form a large drop-off area and the roof of the Amphitheater stage.

The Main Grandstand is located in front of the start and finish lines with views of the first turn and provides seating to over 9,000 spectators on three levels. The ground level houses offices and concessions, while the second floor contains amenities, including a 6,500 square-foot lounge and event space. The third floor hosts a second lounge and 29 private suites. The Main Grandstand and the concessions buildings in the Grand Plaza were conceived as a modular system consisting of several components that can be arranged according to need. The concessions, with banners and deep canopies, can be expanded with restrooms, permanent seating or suites. Inherent to this “kit-of-parts” construction system is flexibility allowing the site to grow and change.

The Grand Plaza, comprising 20 acres and bordered by the track on three sides, lies at the heart of the circuit complex. Its location inside the arc of the track is perfectly situated to capture the energy of racing: its speed, noise and excitement. Visitors pass through the main gate and immediately see the Observation Tower at the end of the Grand Plaza, creating a dramatic moment of arrival for spectators. Inside the gates, the Grand Plaza features a reflecting pool and varying landscape zones that enclose the space and define unique areas of activity. A promenade along the north side of the Grand Plaza hosts concessions, retail, restroom facilities, and entrances to spectator seating. Along the promenade is a monumental lawn, sized to accommodate a variety of events throughout the year, including soccer games and music festivals. Pedestrian bridges provide access for visitors to other areas of the circuit complex.

The Tower Amphitheater, slated for completion in spring 2013, will be the largest outdoor amphitheater in Central Texas, with total spectator capability of 15,000 people. Located in the Grand Plaza, with the Observation Tower as a dramatic backdrop, the Amphitheater will be used for large-scale music and entertainment events. The design of the Tower Amphitheater is based on classical Greek and Roman amphitheaters, which use topography of the site to enhance acoustics and views. Italian cypress trees line the edge of the seating areas, referencing the Mediterranean design influence and screening the concessions and restrooms beyond. 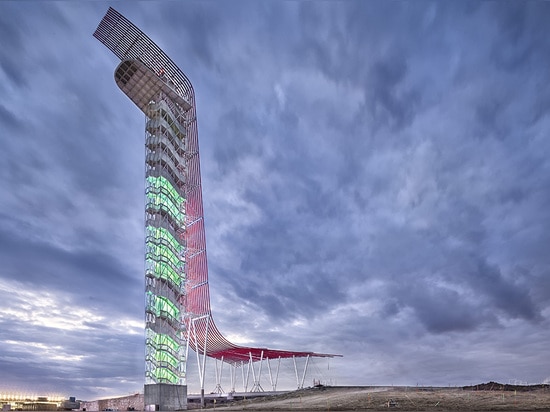 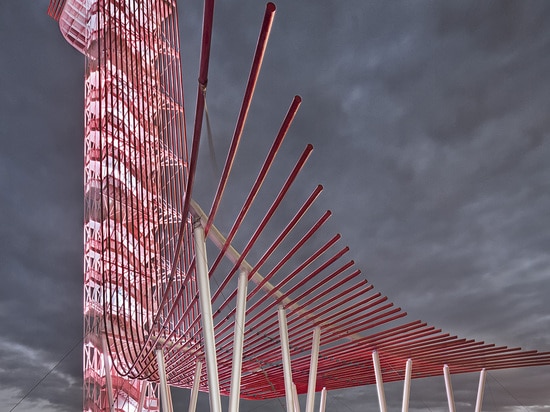 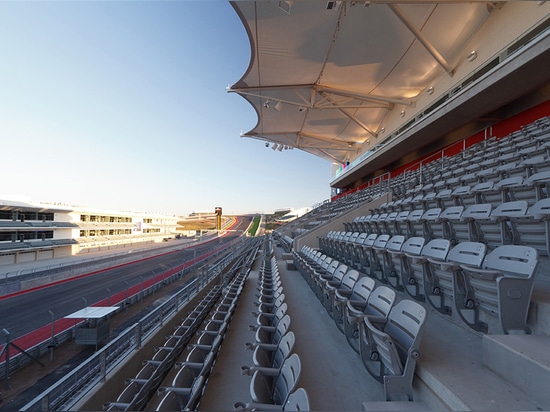 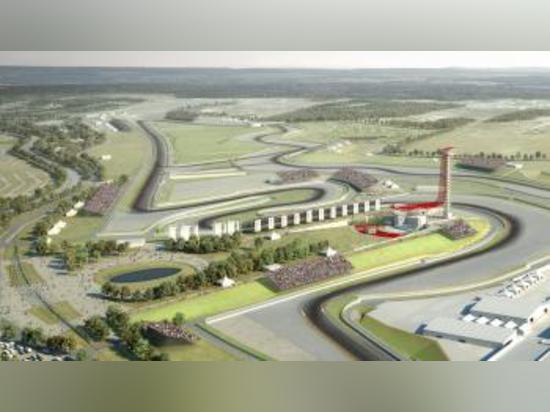 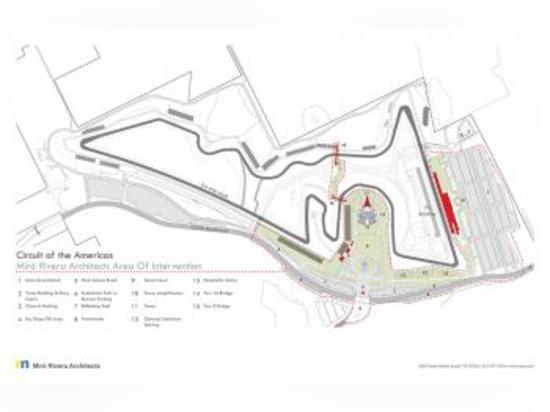