dive into an idiosyncratic fusion of spanish art nouveau with contemporary digital tools: think gaudi with computers, tattoos and a love for the wu-tang clan…

canadian studio partisans has completed the interior renovation of a bar in toronto, designed to rival the art nouveau histories of barcelona’s famed pinxto bars. located at the heart of the city’s little italy district, bar raval is the outpost of canadian culinary impresario grant van gameren and his partner mike webster – one of the world’s most celebrated mixologists.

named after ‘el raval’, a once seedy district in the catalan capital, the scheme draws reference from the passions of the clients who are masters of spanish cuisine, art and culture.

‘the design developed out of a connection between the formal histories of art nouveau, the plethora of cured slabs of meat, and the anatomy of the chefs themselves: a tattooed muscle bound group of intellectuals’, explains partisans. ‘our design is a three dimensional tattoo manifest in pure CNC’d mahogany.’

‘bar raval will be as much an art piece as a restaurant, the architects we hired are the only people in canada and perhaps the world capable of achieving my vision for one of the greatest bars in the world’, furthered grant van gameren, chef and owner of bar raval.the sculpted mahogany wood uses the most dynamic, state of the art technologies and systems in the industry, creating a fluid stage for some of canada’s best culinary and mixology masters to perform their art. externally, the metallic lingerie that shrouds the windows gives passersby only a glimpse of with what lies within – a metaphor for all the mystery that toronto’s culinary and design worlds have to offer.

on a recent trip to toronto, designboom was invited to visit partisans’ studio, where the practice’s co-founders gave us a tour of their studio in downtown toronto. we discussed the development of bar raval, and the evolution of the design concept through mood boards which span the length of their office walls. for more on the visit, see the gallery at the bottom of the page, which includes a visit to the bar while it was under construction.

partisans was founded by alexander josephson, who grew up in forest hill, and iranian émigré pooya baktash, after they met at architecture school at the university of waterloo in 2010. like many in canada, both are frustrated at the long process of becoming a registered architect in this province; nut they are both working on it. in the meantime, jonathan friedman, a south african expat and a licensed architect with a decade of experience in toronto, is now the third partner in the firm. 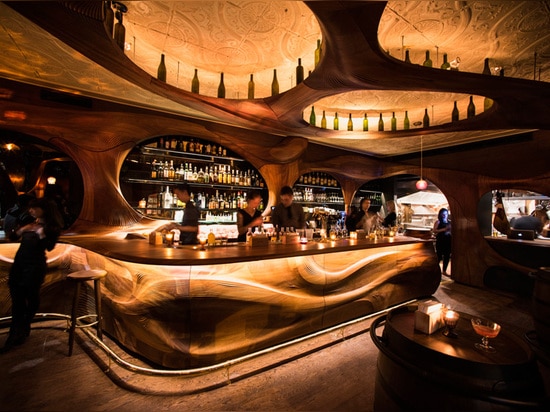 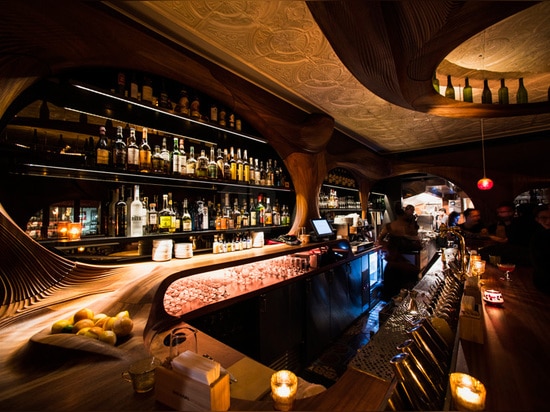 the design references the art nouveau histories of barcelona’s famed pinxto bars. open from breakfast through to last call, it serves coffee, breakfast, tapas and cocktails. 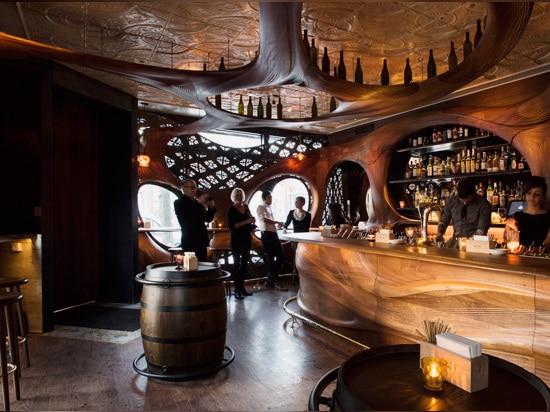 ‘bar raval’ is located in the heart of toronto’s little italy district, the owners are using adventurous design and craftsmanship to build a place that will have the presence of an institution, and might just become one. 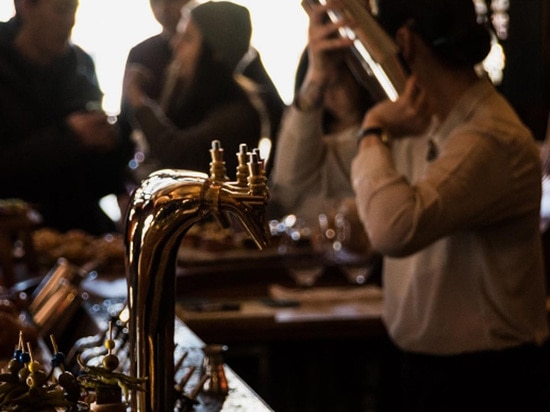 the bar is named after ‘el raval’, a once seedy district in barcelona 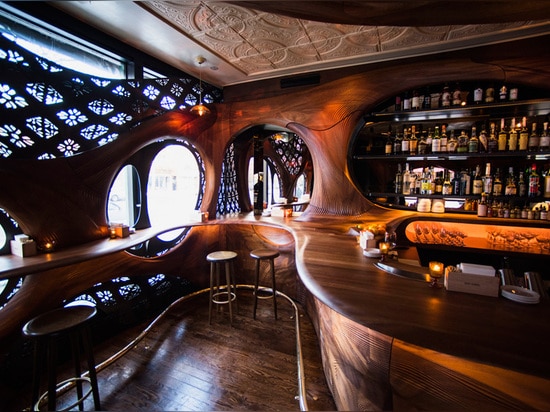 the sculpted mahogany interiors fill the entirety of the volume 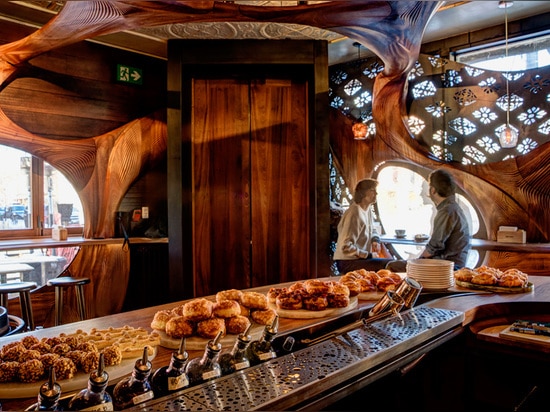 metallic lingerie shrouds the windows, giving passersby a glimpse of with what lies within. (the heavily tattooed bartenders are wu-tan diehards. their bar’s custom drip trays feature the wu logo.)