Modern Meets Homage in the Offices of Vizor Interactive by STUDIO11 in Minsk, Belarus

The offices for Vizor Interactive, a game development company based in Minsk, Belarus, were designed by local design studio, STUDIO11, as an homage to the soviet era construction of the existing space while, at the same time, creating and providing their clients with a thoroughly modern and functional office that met their dynamic needs to a T.

The general aesthetic of the space is one of stripped back, bare bone functionality that defined the era of the building's construction. Highlighting the harsh aesthetics that prevailed back then translates to pipes and various structural beams being visible throughout, running across the ceilings and creeping up the walls. Another strong element worth noting are the floors - the white marble, sliced into geometrically shaped mosaic pieces that spreads, carpet-like from room to room becomes another character adding element that makes an impression.

The finishing on the walls sees bricks poking through the stucco simply white washed and not covered over, while there are visible chips, nicks and brushstrokes in the white or light gray paintwork and stuccoing. However, this doesn't look neglected; on the contrary it manages to achieve a balance of pleasing, real world wear-and-tear. This could also be an apt way in which to describe the simple and functional furnishings - most of which were designed by STUDIO11 - as well as the minimal bathrooms which feature original elements, such as the ceramic sinks and pipe radiators, which were built into the building's construction during the 1970's and 1980's. In fact, it would seem almost like a time warp dating back to when Belarus was under the soviet regime were it not for certain touches such as the modern computer screens on the desks and fancy coffee maker in the kitchen, all of which bring the design of these offices resoundingly into the modern vernacular of our times. 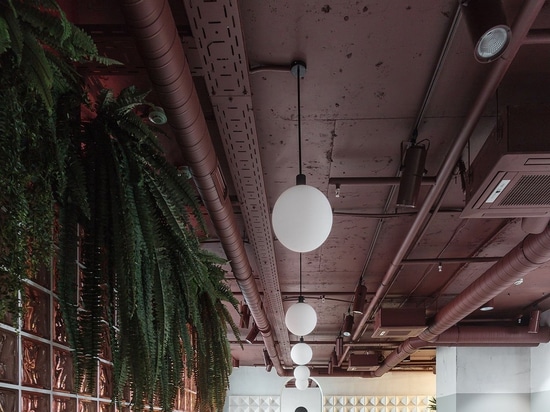 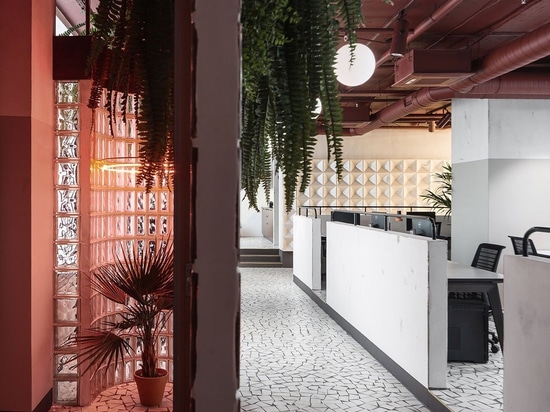