It was the summer solstice. Renzo Piano stood on the glass and steel platform cantilevering 20m into the Bay of Santander from the Centro Botín, the latest project to be completed by Renzo Piano Building Workshop. ‘Water is my natural habitat, salty water,’ he said, looking out into the sea towards the vague definition of the landscape on the other side of the bay.

The platform is not a terrace or a balcony, but an intimate viewing platform for one to become suspended in the horizon. Over the course of the day, it is the best place to watch the colours of the sea and sky change from a bright morning blue, to a pale cloudy afternoon haze, and then intensify into a midnight blue as the sun sets behind the clouds.

‘He was a man in love with the water. In another life he was a fisherman, even though I know he was a banker,’ Piano says quite fondly of Emilio Botín, who commissioned the building in 2011 and unfortunately passed away in 2014 before seeing it realised.

The two leaders, from very different professions and backgrounds, struck up an easy relationship that began with their mutual love of the sea – and even though they discussed their ideas for the project in different languages (Botín in Spanish, Piano in Italian), each always understood the other’s sentiment.

Piano describes Botín as a ‘man with imagination’, who was ‘in love with the city of Santander’. Someone who understood the ‘metaphysical’ nature of what he was trying to achieve, through the architecture of the Centro Botín on the edge of the bay.

Botín had been resolute that it was Piano, without competition, who was to design the building that would represent the cultural legacy of the Botín Foundation, which promotes social development through education and creative enterprises in Spain and Latin America.

Before national alliances or borders, Piano identifies as a southern European, which comes with a sensitive understanding of the cultural spirit of Spain. And, quite remarkably, the Centro Botín is Piano’s first building in Spain, which has been realised in collaboration with Madrid-based Luis Vidal + Architects.

The Centro Botín is located in a strategic part of the city, placed on a corner of land that curves around the historic centre of Santander connecting the Paseo de Pereda that extends down the bay to the beach, to the ferry port that extends in the other direction towards the commercial district.

The bulky tank shaped building is covered in the 280,000 pearly, circular ceramic tiles. Like the scales of a fish, the surface effervesces in the sunlight, absorbing reflections from the sea. The volume of the building has been sliced neatly down the centre, and opened up to reveal two façades of glass (which allow floods of light into the gallery and auditorium spaces inside).

These two volumes have been hoisted up onto slim stilts and a fully glazed ground floor restaurant, café and shop. Quite characteristically, Piano moved the circulation to the exterior, so the volumes are accessible and connected by light walkways and staircases of steel and glass. The architecture encourages visitors to enjoy the salty breeze and the sea views as they pass from the auditorium to the gallery or explore the viewing platforms.

‘I have never seen a square fish, and we wanted it to come up out of the water,’ Piano says of the curved shape and the elevation of the building. One of the main motivations to curve the edges of the building was to shave off volume to allow more light to reach the public space beneath the building, and also to allow for uninterrupted views of the sea.

The building is certainly not elegant. It’s more of a tin of sardines, than a tropical Blue Gourami. It does not smoothly rise up out of the waterfront like AL_A’s MAAT. Nor does it swirl up like Niemeyer’s MAC in Niterói, Brazil. Or indeed is it quite as iconic looking as Gehry’s Guggenheim in neighbouring Bilbao. Yet, its bulky and awkward form does not look totally out of place.

The submarine-style building quotes the industrial waterfront economy of the city, which originated as a Roman port settlement, and now is a major cruise ship terminal. Driving down the S-10 road into the city, from the rocky and green countryside of Cantabria, Santander’s urban identity is defined by the warehouses, tanks and containers of the fishing and ship building industries that line the waterfront.

The S-10 soon merges into the city, passing through the Barrio Pescquero, past the ferry port, and just beyond there, when the Centro Botín looms, the road that carries 13 million vehicles a year, sinks beneath the surface of the land to smoothly underpass the new piece of completely public land – an urban intervention designed by RPBW. Originally reclaimed from the sea in the 1800s, this land was previously a disused loading bay, an expanse of sunburnt grey concrete.

‘Cities are full of black holes that have been left from industrialisation. This wasn’t the case here, but we are resolving a part of the city that was doing something else – it’s about transformation,’ says Piano, whose design encompassed a mini-masterplan that reconnected the centre of the city to the waterfront, extended the Paseo de Pereda and doubled the existing Jardins de Pereda from 20,000 sq m to 48,000 sq m.

‘The most important thing of our time is the transformation of cities. And instead of making them bigger and adding more peripheries, it is to intensify and give quality to the city by implosion,’ says Piano.

The public space around the building is just as important, if not more important, than the building itself. Designed with landscape designer Fernando Caruncho, the Jardins de Pereda, which date back to 1905, have been modernised and redesigned. Historical monuments have been retained, while contemporary updates include a new urban sculpture by Spanish artist Cristina Iglesias.

‘The fundamental thing was to leave everything open and accessible,’ says Piano of the space surrounding the Centro Botín. Here, concrete paths, stained blue with copper and iron sulphate, connect the Alfonso XII Square to the new playground (already populated with shouting children, café pavilion – that was redeveloped from a former petrol station, and to the Centro Botín. A blue stepped amphitheatre, already clipped by skateboards, blends into the plaza that runs beneath the Centro Botín, which rolls out to the bay.

While the Centro Botín is a monument to the foundation and the family that have funded it, it is also a new public space that has been carved out for the public to enjoy. Walking across the blue concrete plaza beneath the steel platforms, from the gardens to the bay, colours intensified as the sun set on the solstice – life feels more amplified when framed by Renzo Piano. 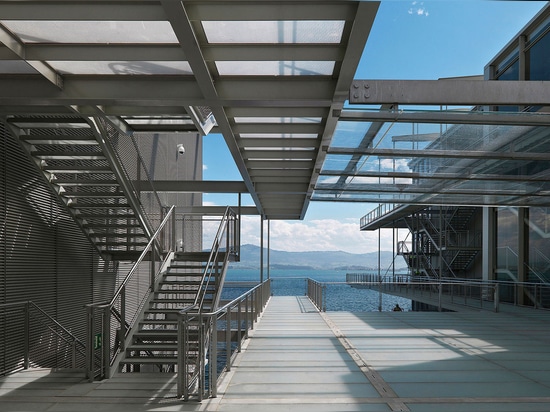 On the first floor of the Centro Botín, an open air platform extends out into the bay and connects the two volumes together which hold the galleries and the auditorium. Photography: Enrico Cano 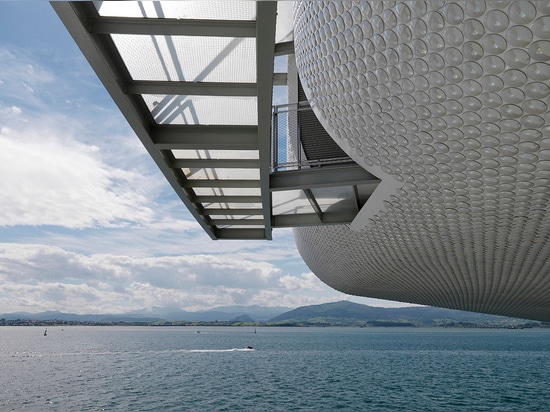 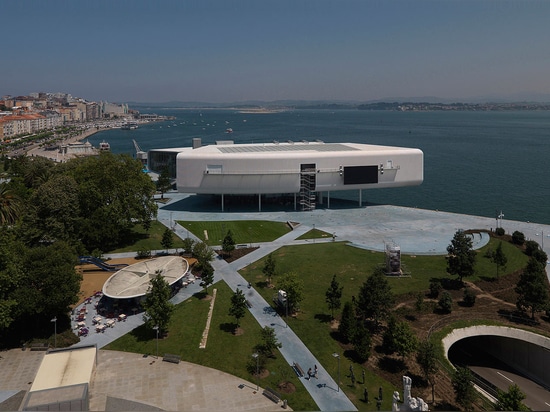