between nature and architecture: sou fujimoto discusses his approach to design

for the second consecutive year, reSITE invited one of japan’s most influential architects to speak at its annual conference in prague.

designboom was a main media partner of reSITE ACCOMMODATE, which took place in prague earlier this month. at the event, zdena zednickova — a reporter at archiweb and a professor at the faculty of arts and architecture, technical university liberec — interviewed fujimoto, who discussed a range of topics including the relationship between his architecture and nature, and his different approaches to design. read the interview in full below.

zdena zednickova (ZZ): I would like to start our conversation with the ‘forest’ because you very often talk about the forest and you relate it to your projects. is it possible to say that the forest with all the layers of meaning is the core of your creation?

sou fujimoto (SF): of course, the forest has many different layers and meanings. for me personally, the forest is my background. I grew up on hokkaido, and as a child I often played in a wild forest. of course, at that time, I did not think about architecture at all, but when I started to study architecture, I felt that the experience of staying in the woods has many meanings in relation to the scale and diversity and something beyond the functionality. and, of course, the contrast between tokyo where I studied architecture and the natural environment in which I grew up was very interesting. in the center of tokyo and in its residential areas we do not find such vast wildlife areas, but walking through the small streets of the city and meandering through them seemed to me almost like walking through the woods.

I think this is because in both places we are surrounded by small elements – in the forest there are leaves, branches and small bushes; in tokyo there were many small artificial objects as if floating in space even including the electricity cables. I felt that the forest is not just a forest, but a structure behind it, a place where you are surrounded and protected by small elements of the human scale, but it is also an open field where everyone can choose their own way and their own activities. it could be a place that inspires diversity, in this diversity you choose your own path, your places to stay and the way to experience it. in this sense, for me, the forest is an iconic word that represents the fundamentals of architectural thinking and the basics of thinking about interconnecting architecture and nature. the basis for creating something that goes beyond the usual functional thinking about architecture and that’s why I like it.

ZZ: maybe the forest could be also related to your fearlessness… in bohemia, we have the saying ‘if you’re afraid, you cannot go into the forest’, which evokes your earlier statement that ‘in architecture you are not afraid of anything in that you welcome all the challenges’. do you still have this feeling of courage related to architecture?

SF: I understand that in the european countries the forest is rather a dangerous place, and that you have to be brave enough to enter it, maybe my understanding of a forest from the point of view of japanese culture is closer to the human life. in any case, I am not afraid of the challenges, I am not afraid to do things, and I also really like to respect the existing cultural background or lifestyle in different cultural situations or climatic conditions. so, on the one hand, I really like to respect the history, culture or lifestyle that is behind every different context, but at the same time I want to be brave enough to reinterpret the basic elements of this context and to try to create something new, something really new, which is in harmony with the history and culture of the place. in this sense, the challenge is not only to be courageous enough, but to be sensitive and respectful.

ZZ: as you are leading an architectural office not only in tokyo, but also in paris and in europe you build many projects, how do you perceive and how do you deal with such different contexts? japanese urban environment is usually seen as very variable and inhomogeneous, while european environments are often relatively stable and regulated. are you not afraid of dealing with such a strong historical context with europe, and how does this affect your approach to projects in europe and in japan?

SF: actually, when you think about the complete foundations and beginnings of architecture, these superficial differences are not such a big problem. because, for example, when you think of human behavior in relation to architectural spaces or their relation to the surrounding context, these bases do not change that much depending on different places. so, for me I feel I’m not so much related to these superficial characteristics of the japanese context, but rather to something that is in its essence. every time I find it very interesting to discover something that differs from my cultural background, what I could respect and what I could draw inspiration from. france is so different and has a truly admirable cultural heritage, so when I think how to respect this environment and how to bring something new to it, it is a creative challenge for me. I also see a similar situation globally, and I think it is very important to respect all local conditions. I think the coexistence of globally produced architecture and respect for the locals is possible.

ZZ: also the aspect of aging of the buildings is quite related to a different cultural context. in the japanese urban environment, buildings are replaced by new ones in a much shorter timeframe than in europe. it also seems that they are not that much burdened by the sense of need to preserve the construction to future generations and with the associated care for aging. do you consider this aspect, for example, from the point of view of using different materials on projects in japan and in europe in the context of its historical architecture?

SF: even in japan, we pay attention to the aging of buildings, the buildings are not so temporary, and they should last as long as possible. maybe from a european point of view they seem temporary, but it is not. of course, the use of materials in these cultures is different, but basically our intention is to create something valuable for the future.

ZZ: your buildings are very often interconnected with nature, as mentioned in connection with the topic of ‘forest’ and they are literally blended and grown through with the trees. architecture in your case is a stable element, but nature is dynamic and growing. how do you perceive this contrast of solid and variable parts? aren’t you afraid that the nature could take over your buildings? that nature will devour your buildings and that they will essentially disappear, vanish?

SF: of course, if we leave these natural elements free to grow, it could disrupt the structure and collapse the building. but I believe that architecture should be linked to people’s lives, so everyday life and everyday care for nature as well as for the building itself should be in harmony. the involvement and commitment of people’s lives is changing everything. of course, nature and architecture have a different life span, but I believe that if people love their environment they take better care of it.

ZZ: I mention this because I saw a recent photo of your ‘house N,’ which you also call ‘box in box in box’, and originally a thin tree was now protruding through the openings of the outer box in quite large volume. when designing your projects, do you count with greenery as with another architectural compositional element, with its varying mass and shape?

SF: of course, I imagined that the tree would grow bigger and penetrate through the openings of the outer box, but at the same time it is necessary to take care of the tree, because if it gets too dense, it would shade too much. even in europe, you assume that if you take care of greenery, it gets healthier. when communicating with nature and with the trees, through taking care of it, it become part of our lives, this care of the natural environment makes our lives richer. to participate in the process of nature’s life, in its cycle, must be fantastic.

ZZ: so is it more important for you to become close with and take care of the relationship between man and the natural element, as the tree, rather than use a nature as an architectural element?

ZZ: in one of your lectures, you said that you like to make things look like they are not designed. so is nature controlled by the desired direction part of this concept? or is there a room for uncontrolled and unexpected growth?

SF: an interesting aspect of nature is that we cannot control it on one hundred percent, but that does not mean we leave it to grow uncontrollably. as I said, the more important point for me, is the communication with nature, with architecture, and with living environments. this communication becomes richer if nature or architecture behaves unexpectedly, because it is something that goes beyond our minds. so you can discover something new or you will notice something that you have never thought of before. I think such encounters with unexpected things are beautiful.

ZZ: is this also related to your concept, which you call ‘system less system’?

SF: yes, though I tried this concept and it is not yet finished. we have to have a system, we need a program, but at the same time I like to create things that go beyond that system. the experience of space then becomes much more diverse. coexistence of order and chaos allows this if you can find the right balance between them. 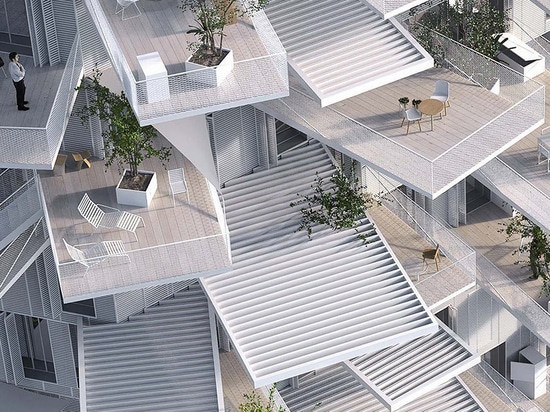 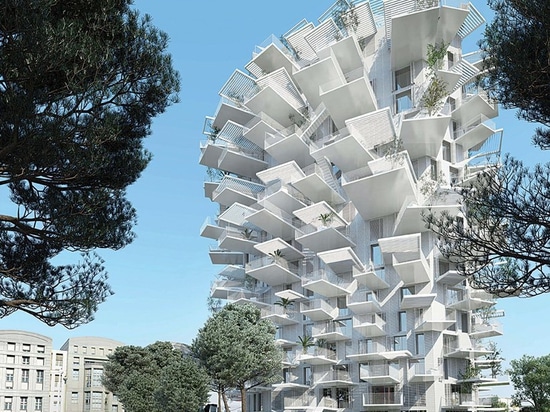 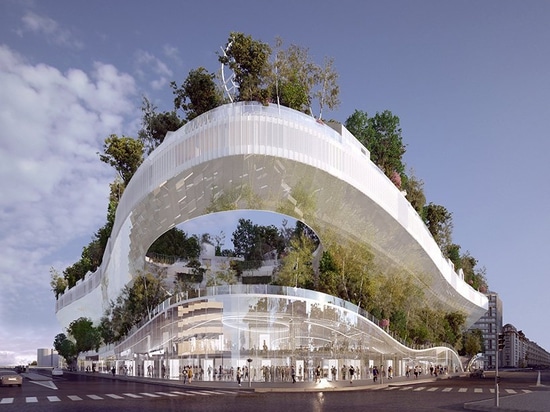 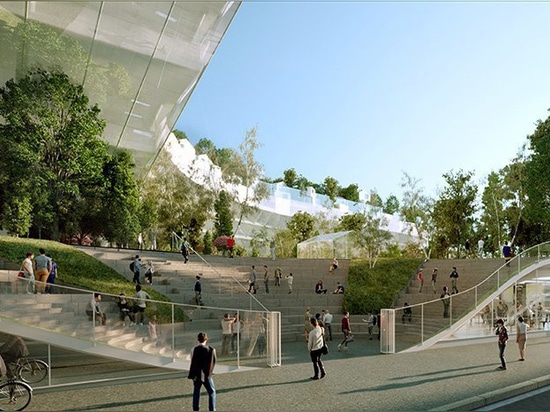 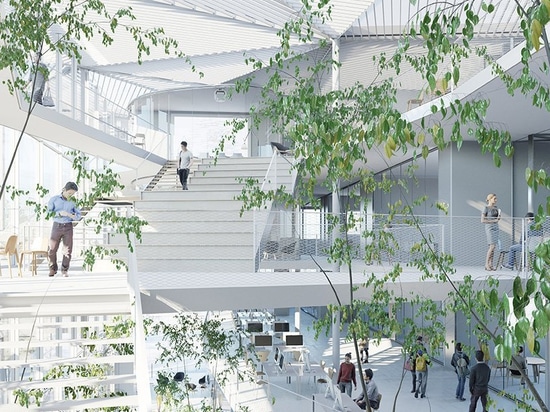