China Fondation at the Cité internationale universitaire in Paris

A contemporary hybrid building With the new China Foundation, the Cité internationale universitaire in Paris continues its great tradition of national pavilions.

Winner of the competition, the Coldefy & Associates agency has designed along with the Atelier FCJZ a building at the crossroads of French and Chinese cultures in an architecture that reflects the dual sensitivity of an agency set up in both France and China. If the building conceptually and formally translates the convergence of the two countries, it also solves by its facades the complexity inherent to the plot: to the south, sunshine and maximum visibility from the periphery ring road, with noise and pollution as a corollary; to the north, a clear view over the lawned park of the complex, but a natural light to find.

A nouvelle vague for the Cité internationale universitaire de Paris The Cité internationale universitaire de Paris completes an exceptional architectural heritage with the China Fondation, which brings together 40 national pavilions whose diversity of styles, between international references and modernist trends, are the witnesses of the architectural diversity of the 20th century. Located in the south of Paris, between the Montsouris Park and the parisian ring road, the Cité internationale universitaire de Paris houses nearly 12,000 students, researchers, artists and athletes from all over the world. In order to meet an ever-increasing need for student housing in Paris, the campus plans to build 1,800 additional dwellings in 10 new homes by 2020. Delivered in October 2019, on the occasion of the 70th anniversary of the People’s Republic of China, the China Foundation will be next door to the House of Korea, which will open at the end of 2017.

A Franco-Chinese team Coldefy & Associates along with the Chinese group FCJZ enjoyed a major asset to clinch the China Foundation contest ahead of four other binational teams: it knew China well. The agency is structured around two locations, in France and China, with offices in Lille, Paris, Hong Kong and Shanghai. Historically based in Lille, Coldefy & Associates has consolidated its presence in China since it won the international open competition for the Hong Kong Design Institute in 2011. This strategy has been reinforced over the years by several projects including the Bao’An Public Culture and Art Center, Shenzhen Museum and Cultural Center, won by the agency last March. For the China Foundation, Coldefy & Associates has gathered a team that brings together Chinese and French knowledge and expertise. It shares several characteristics with the Chinese agency FCJZ, in particular that of being structured around a central couple and animated by an international tropism. The technical offices are French so as to better assure the technical constraints of the Parisian site Chinese artist Sui Jianguo joined the adventure to create a carved mountain around the future residence. Beijing Capital Land was commissioned by the Beijing Municipal People’s Government for the project management and funding of the China Foundation, which is estimated at 30 million euros.

At the crossroads of two cultures The China Foundation will offer its future residents 300 rooms, study rooms and lounges, in a building that combines French and Chinese cultures with a contemporary interpretation free of pastiche.

Its shape resulted from the bold fusion of two traditional urban types: the Chinese tulou — a circular community residence built between the 15th and 20th centuries in southern China — and the dense Haussmannian block built around an inner courtyard, whose form follows the surrounding streets and to which Paris owes its unique quality. But, unlike the tulou that erects thick almost windowless earth walls to counter enemies, the Foundation of China interacts with its surroundings and like the Haussmann building are enveloped in vibrant facades. The apartments enjoy light from both sides and feel open inside and out.

The China Foundation is built in a circular and elongated shape, naturally finding in its center the heart of the community life of the residence, which is constructed around it. In the central garden reserved for the residents, a metallic Piranésian staircase is deployed in the center of the passageways of the nine levels which, concealed behind wooden holes, give access to the rooms.

Addressing the site’s ambivalence The China Foundation responds to the ambivalence of a rich and complex site, nestled in the heart of the abundant park of the Cité internationale universitaire in Paris, but also on the edge of the ring road. It makes the most of the advantages of this unique framework while protecting itself from its disadvantages.

It overlooks the park and the emblematic House of the Provinces de France by a great opening that brings to light a principle established long ago by the Cité internationale universitaire de Paris: inviting people and nature alike to enter. Each facade adapts itself to its situation: to the north, concave shapes bring a maximum of light and offer a peaceful view; to the south, convex shapes also bring natural light into the rooms, but preserve them from the noise and pollution of the ring road, which will become a major urban boulevard over the space of a few decades. These two styles are incarnated in a unique material dear to the Chinese but also used at French city Lille: brick, which is something of the flavour of the day in contemporary apparatus.

Finally, the singularity and identity of the Foundation of China is crowned by a running track whose surface is made of photovoltaic panels. Through this students, between two strides, garner an enlarged view on the Greater Paris and it displays to motorists and pedestrians a major feature of the Cité Universitaire Internationale de Paris: to unite sport and studies with a goal of going beyond oneself.

Modular rooms The double treatment of the facades is reflected in two types of rooms: to the north, they are extended by a small balcony overlooking the park, while to the south they are equipped with large desks. The highlight of this part of the project, is the furniture of each room is movable, allowing for the the desires and needs of each individual in an area of 15 m2 on average. By moving the desktop the student will be able to work alone, with others, on his bed, or put all that aside. 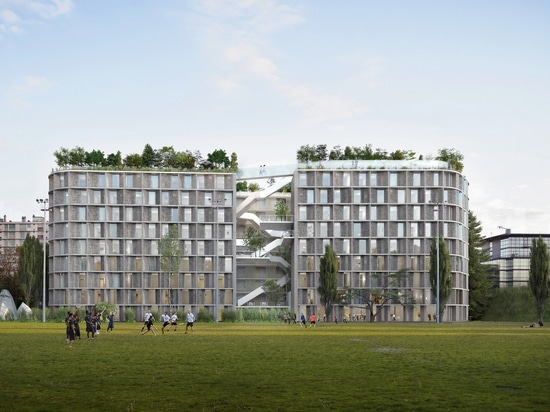 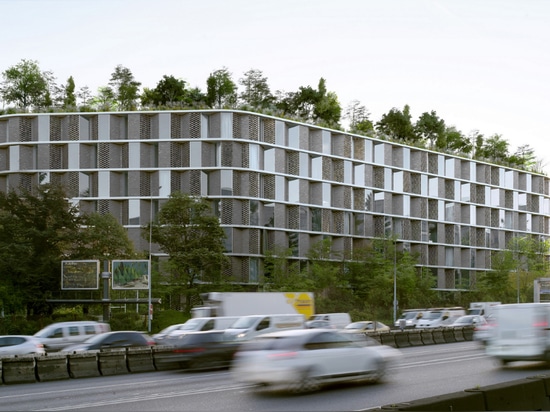 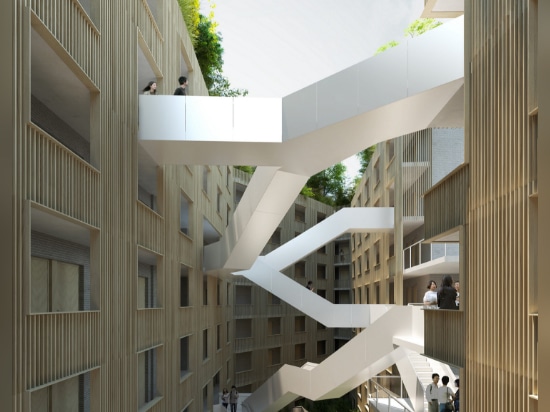