Dutch practice Unknown Architects has given this 20th-century home in Leiden, the Netherlands, an understated overhaul to draw attention to its historic quirks.

Corner House sits on the bend of a residential street in the Burgemeesterswijk neighbourhood. Originally built in the early 1900s, the three-storey property has since undergone a number of renovations that obscured its original decor details.

Amsterdam-based practice Unknown Architects has revamped the home to "celebrated its core qualities" for its owners – a family of four who hail from the UK. The refurbishment is designed to suit the comfort requirements of one of the parents who suffers from a chronic illness, and often has limited physical movement.

"The house has been designed to be their home for the future, so we worked on integrating supports throughout the house to make everything as natural as possible," Daan Vulkers, co-founder of Unknown Architects, told Dezeen.

The practice decided to make a series of small interventions that wouldn't compromise the 160 square-metre home's existing layout, in which all the rooms are organised around an unusual pentagon-shaped hall.

An opening has been created between the dining and living area, in attempt to re-establish the ground floor's original open-plan layout. The sides of the new doorway have integrated shelving units that can be pulled out to display the inhabitant's books or ornaments.

Suspended ceilings that were previously in both rooms have been torn down to reveal ornate stucco work. The architect has also restored the stained-glass panels on the home's front facade, and inserted full-height windows on the rear elevation to allow more natural light into the interiors.

"This approach, which is sometimes restrained and other times daring, aims to add a new layer to the history of the building," said the practice.

Colour and material palettes have been kept simple throughout, with a majority of the walls painted white and paired with oak herringbone floors.

Sage green panelling has been introduced on the landing of the first floor to camouflage the client's stairlift.

Upstairs, a mezzanine level has been knocked through to connect the second floor to the attic and create bright, airy quarters for the client's two children. The room is now centred by a simple pinewood volume, which contains a bathroom – this also acts as separation between each child's bedroom.

A timber partition has also been erected to outline a common play area. 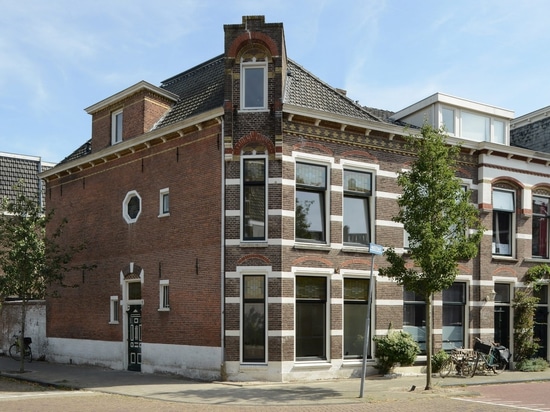 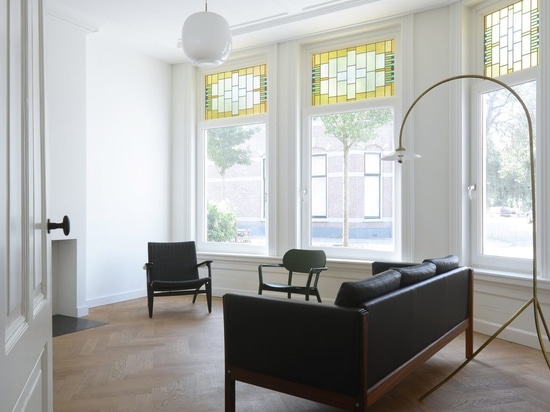 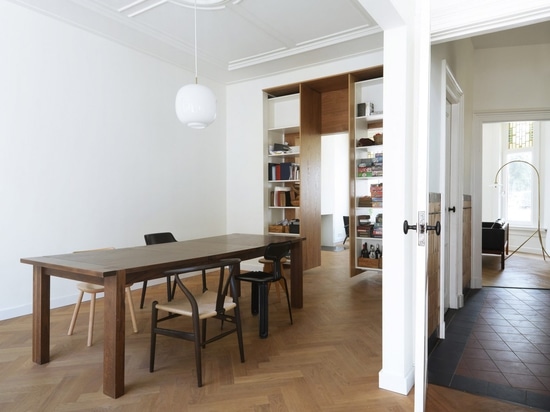 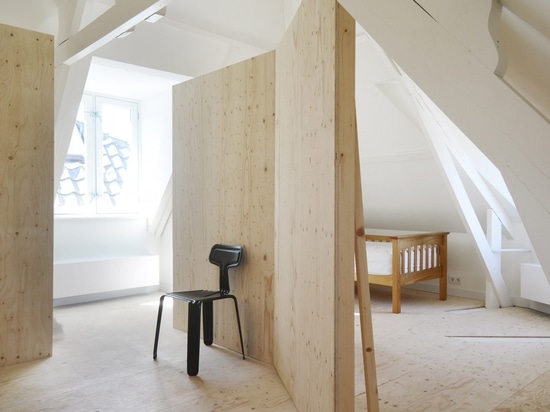