"Layering Yard" is hidden in a traditional commercial block near the Qianmen of Beijing, with an area of about 500 square meters.

The original architecture was a quadrangle courtyard commercial building with the characteristics of houses in the Republican period. Compared with residential houses, the houses here are bigger and higher. There is a row of arched doors and windows on the south along the street, and two-story houses on the north. Before the renovation, the housing structure was completely rebuilt; with the courtyard there were no doors, windows or walls, but exposed rough wooden structure beams. It is said that it was a brothel in the Republican period, then transformed into a bakery after the foundation of China, and later was left unused after the reconstruction. In the future, the building will be a complex for public activities and living. Therefore, while improving the quality of construction and infrastructure, this renovation focused on creating experience in particular scenes based on the Hutong environment, aiming to attract urban population who have increasingly diversified consumption demands.

A prominent feature of traditional architecture is the layering courtyard. In a quadrangle courtyard with three layers, a house's function changes as people entering each yard, the privacy gradually increases from outside to inside, giving people an impression of "deep courtyard". The design was inspired by "multiple layering courtyard" in traditional spaces, thus the previous inner courtyard was changed into a "three-layered courtyard" in order to adapt to the transition from the public spaces to private spaces step by step, besides, the designers took advantage of the yard's layering structure to create a quiet, natural and poetic scene in a noisy Hutong neighborhood. "Layering Yard" has rearranged the relationship between new and old, inside and outside, artificial and natural. Firstly, the designers demolished some parts of the house roof in the south so that the first layer between the interior space and street yard was created, secondly, they added a slope-roof building between houses on the north and south, and then separated the old and new with two parallel yards. The three-layered courtyard allows all indoor spaces to be accompanied by bamboos and sunlight. The spaces are separate but penetrate with each other, the glass walls with spray patterns look like overlapping peaks, which further strengthen the translucent sense, thus achieving the layering juxtaposition of different scenes and living situations from outside to inside.

The house's usage patterns follows the naturally transition from openness to privacy of the three-layered courtyard. The south house is a place for public gathering activities, with an arrangement of reception space, dining room, bar, kitchen, office, warehouse and so on. The original wooden beam and column structure was preserved as much as possible, and two new wooden box service units were placed inside to divide spaces of different scales. Through the first layering yard, the window openings of the original building and the painted doors form the effect of "shadow wall", together they outline a real and colorful Hutong life scenes under the setting of bamboo forest. The house in the middle was changed into a flexible multi-functional space, which can be used together with the front restaurant, or as an independent exhibition hall, or be integrated with the guest room area to become a rest area. The designers tried to consider the harmonious relationship between the new building and the two old slope-roof buildings on both sides in terms of the scale, lighting and distance. The inner spaces were built around a linear waterscape garden, and mainly used transparent, translucent, reflective materials and furniture to weaken the spaces' physical feeling and create a light, transparent and floating atmosphere that is different from the old building, making the spaces allusive and concealing in the bamboo courtyard. Houses on the north side are the most private places. The designers made use of the original structure to divide the first floor into four rooms. The rest area and bathroom area were separated from each other by the change of materials. Each guest room has an individual bamboo courtyard, and the inside and outside are stacked with one another. The second floor was divided into three rooms of different sizes. Through the floor glass curtain wall, people can enjoy the best views of layered gray tile roofs, green trees and blue sky. All rooms are equipped with facial recognition and intelligent control system. Guests can book a room online and scan a code to check in, providing an easier and more convenient living experience. 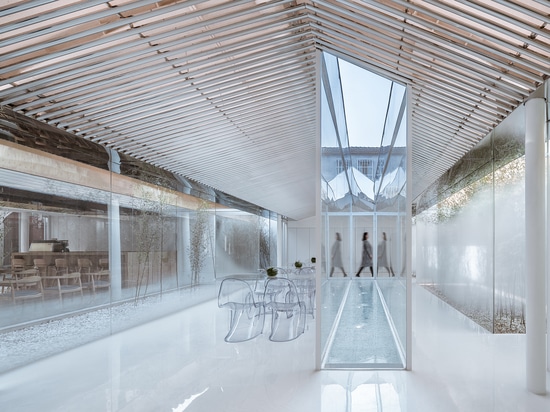 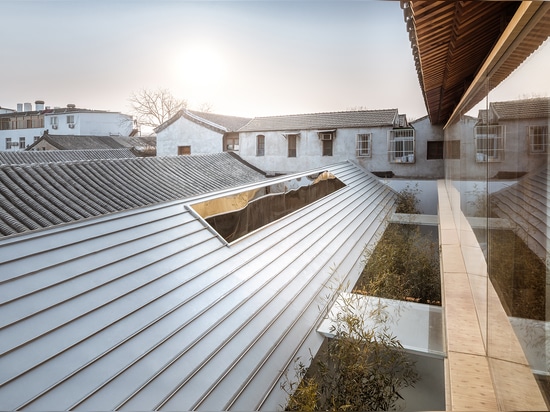 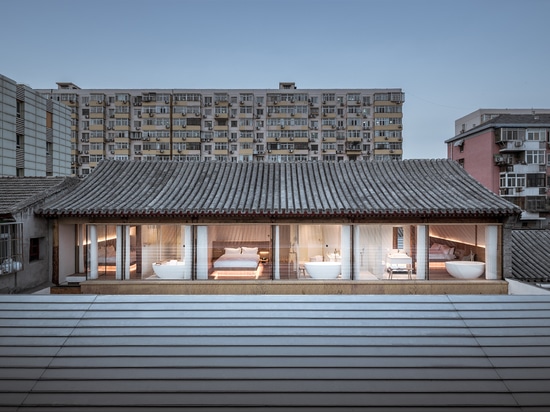 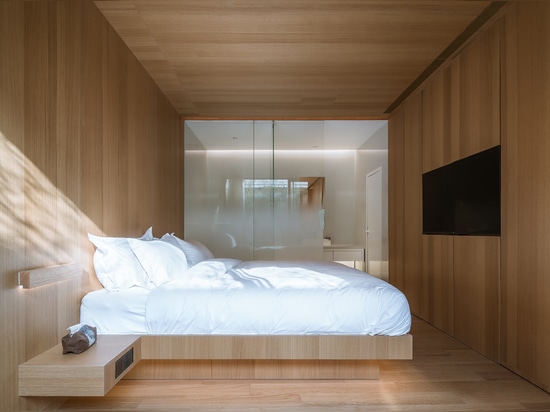