Fabled Studio used a restrained material palette for the interiors of this restaurant in east London, where warm-hued wooden fixtures and furnishings contrast against cold concrete surfaces.

The restaurant takes its name from its location on Leonard Street in Shoreditch, a busy East End neighbourhood recognised for its eclectic mix of eateries and bars.

It is the second dining space to be headed up by chefs Jackson Boxer and Andrew Clarke, who together have overseen Brunswick House restaurant in Vauxhall since 2015.

Their inaugural restaurant is decked out with antique furniture and huge chandeliers, but for St Leonard's Boxer and Clarke wanted a more pared-back aesthetic to match the "honest and simple" menu that includes hearth-roasted meats and oysters.

Limited on time and working with a restricted budget, the pair called on the help of locally-based Fabled Studio to develop the "monastic, arboreal, and chic" interiors.

They first worked on the design of the raw bar area, which is centred by a huge block of veiny black granite. On top sits an ice-filled metal tray presenting a variety of seafood for diners to pick from.

Behind is a burnished metal storage unit that openly displays crockery and jarred ingredients.

"[Fabled Studio] did an amazing job of helping us transform the concrete box we'd stripped back into a space that felt human and sensibly proportioned," Boxer told Dezeen.

A traditional wooden farmhouse table has then been placed in front of the restaurant's hearth, where meat is suspended from hooks and cooked over a small open fire.

The space otherwise features a large curved counter, where customers can eat overlooking the drinks bar, and a series of spherical pendant lamps by designer Rose Uniacke.

Alongside the walnut tables and chairs are several cushion seats that have been upholstered with sandy-hued linen, hand-dyed by Atelier Bâba.

Other than a few leafy bucida buceras trees that have been planted in reclaimed pots, decoration has been kept to a minimum to allow natural light to cast "dappled shadows" on the bare walls.

"Ultimately, as with all these slightly DIY projects, it ended up nothing like our original sketches. However, I believe it's a much more beautiful space for it," Boxer explained.

"The simplicity of the space, and the lack of ostentation, the warm glow of the fire, and the calming austerity of the cell-like concrete floor all produce a marked temporal shift when you walk through the door – the pace of life tangibly slows." 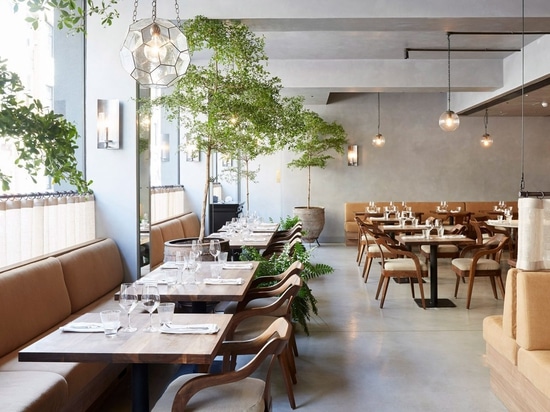 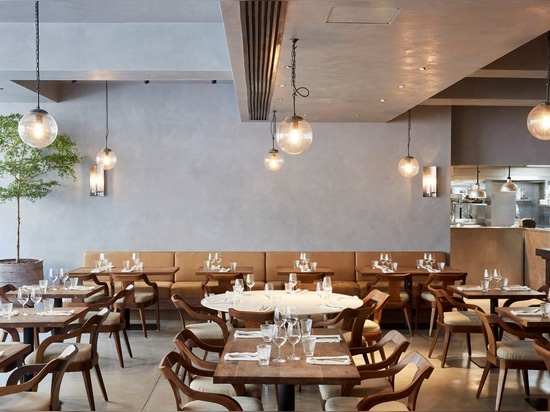 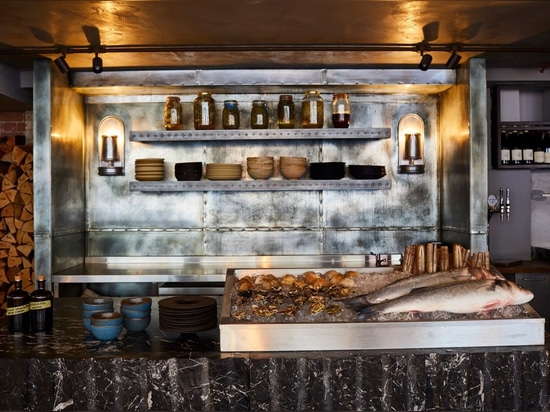 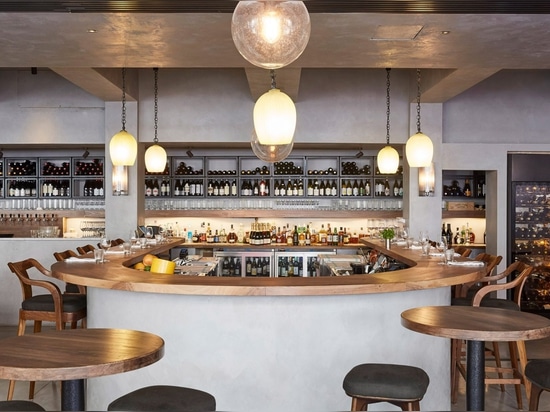 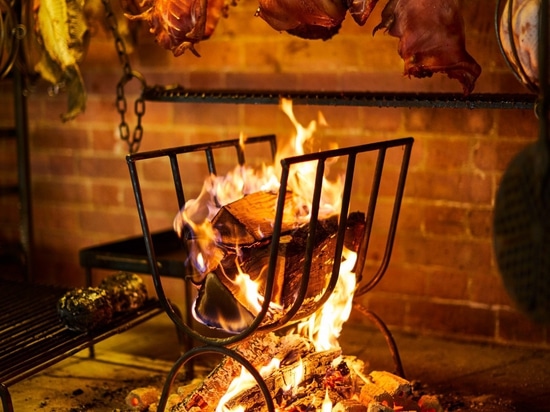