A carpet designed to look like the ocean and an octopus-inspired artwork feature inside Sean Connolly at Dubai Opera, a restaurant atop Dubai's opera house, designed by Sydney studios Alexander & Co and Tribe Studio.

The ocean-themed restaurant and bar is located on the rooftop of Dubai Opera – a glass-wrapped performing arts centre designed to resemble a local dhow boat with its swooping roof.

Taking advantage of this, the 350-person restaurant features an external courtyard and sky garden, which offers diners impressive views of the city skyline, including the Burj Khalifa.

This garden is used to grow produce for a kitchen run by chef Sean Connolly, who is known for his oceanic Australian- and New Zealand-influenced cuisine.His involvement provided the inspiration behind the restaurant's oceanic design, which Alexander & Co describes as an "underwater modernist salon".

"The bistro explores the colours and tones of the sea, oyster, sea cliff and coastal escarpment," explained the Sydney-based design interiors studio, which completed the project in partnership with architecture office Tribe Studio.Although largely open-plan, the venue is carved up into various different areas defined by changes in materials and finishes. Spaces include the Raw and Fire bars, a brasserie, a main bar, a private dining room, a chef's table and an external bar.

"The project was very ambitious and quite large," said Alexander & Co. "The design DNA developed from what was initially a coarse-grained Tasman inspiration – rugged, worn and sun bleached."

"However realities of the many Dubai Opera stakeholders and their own ambitions shaped the restaurant to become more refined, and a bit more delicate."The team were influenced by various 20th century buildings with swopping curved lines, such as the wing-shaped concrete roof of New York's TWA Terminal at JFK airport by Eero Saarinen, and the shell geometries of the Sydney Opera House.

"Each design element within the venue explores ideas of the sea, from the oyster with its combination of smooth sensual surfaces and textured outer surfaces, to the oceanic tones and colours of corals and pearlescent hues," they explained.For example, the designers used a combination of matt and gloss tiles on the restaurant's vaulted ceiling to evoke the sheen of oyster shells, while the grey marble banquettes with pink leather upholstery in the central Pearl Bar are inspired by the delicate contrasts of ocean corals and sea creatures.

The Pearl Bar, which functions as a central cocktail bar, is constructed from grey leather, walnut timber and yellow marble, while the decor of the raw and fire bars is influenced by the outer edges of blackened seashells.

The spaces are furnished with various pieces of 20th century furniture in green, grey, blue and white tones combined with natural walnut timbers."Central to our innovation at Sean Connolly at Dubai opera was an ambition to arrange inexpensive materials in a way that would give them architectural value and a historical reverence," concluded the team.

"Noting that the local trends within Dubai are recognised for a design tendency to overuse expensive materials to the point of cheapening them, our goal was to utilise where ever possible inexpensive or mass produced materials in a very focused and detailed way so as to almost through alchemy, turn them into something magically beautiful."Alexander & Co is shortlisted for emerging interior designer of the year in the inaugural Dezeen Awards. Other projects by the studio include a renovation of a waterfront holiday home in Sydney featuring a monochrome colour palette.

Tribe Studio's other recent projects include a house extension featuring a "brick sunburst". 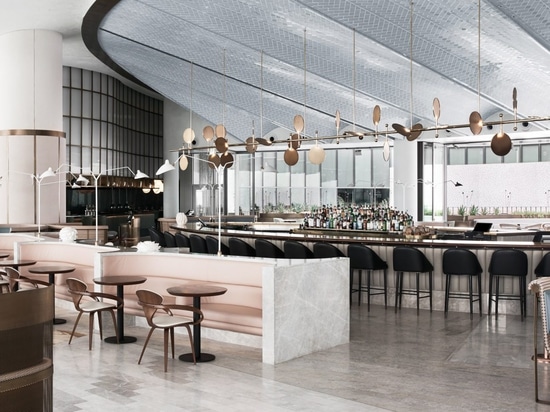 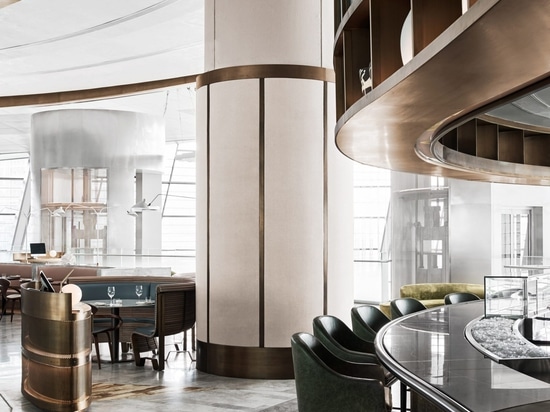 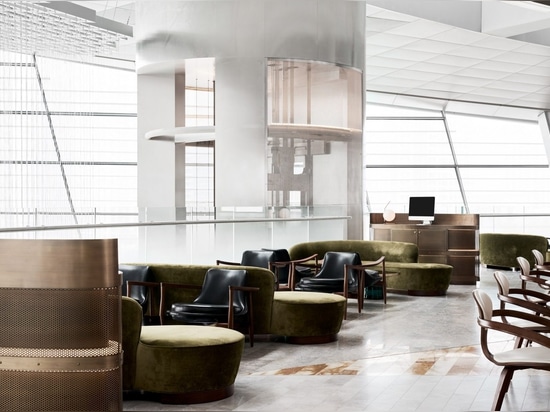 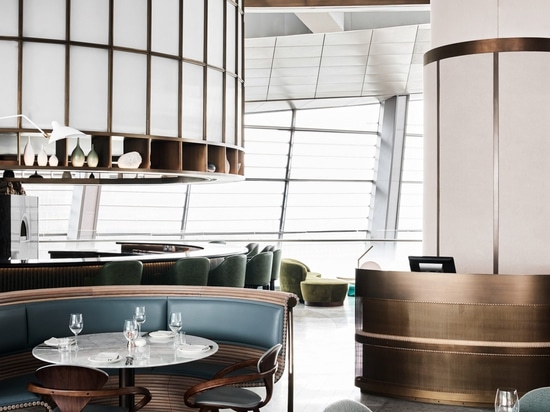