Emerging from the rational Soviet framework of 18th-century Moscow are new policies and architectural initiatives aimed at giving the city a human (or perhaps post-human) scale.

This is the title and caption of a painting by Emilio Isgrò. The sentence is written underneath a large, all-red rectangle. Seen today, the picture as it hangs in the meeting room of the landscape architects Land in Milan seems to have incredible premonitory powers – not just regarding the career trajectory of the landscapers Andreas Kipar and Giovanni Sala, who founded the Land office in 1990, but also regarding the future scenario in Moscow. Isgrò was connecting to the Kazimir Malevich painting Red Square (also titled Painterly Realism of a Peasant Woman in Two Dimensions), which along with Black Square synthesised almost one century ago the fundamentals of 20th century Russia. It is a playful reference, but a highly conceptual one with a humorous narrative addition. While Malevich's Suprematist geometry contains the codes of thought that oriented the development of the Soviet capital for a long time, Isgrò's caricatural running words show a complementary desire for nature. Unwittingly, they revealed in advance the present Russian metropolis, population 17 million.

Moscow's new course began in 2012, when Mayor Sergei Sobyanin called in Sergei Kuznetsov (1977) to become the city's chief architect. The latter geared his action toward creating a city on a human scale. In addition to contributions by internationally known architects, the post-planning of Moscow includes bio-remediation projects that are of the ordinary type, but not of the ordinary size. Among them is the One Million Trees programme that began in 2013, when 3,000 young trees and 25,000 shrubs were planted in local courtyards. Since then, over 100,000 trees and 2 million shrubs have been added to the cityscape.

Parallel to public programmes, private initiatives have gained momentum regarding the introduction of advanced digital technology, turning the city into a contemporary hub with a lifestyle to match.

After winning the 2014 competition for the design of the new Khodynka park, Land (with Mario Cucinella Architects, Thomas Schonauer and Leftloft) is developing for Sberbank (a state-owned Russian bank) what might be the largest garden city in the world. The impressive 450-hectare master plan concerns a peri-urban area west of the city. The design aims to create a fluid landscape in which three fingers of greenery depart from a bend in the Moskva River, tapering as they stretch toward the more densely populated area. The swathes of green are divided into different functional zones. This new type of "nature politics" neither aspires to obtain classic boundless space nor is it based on the infinite availability of natural resources. According to the landscape architect Andreas Kipar of the Land office, "The granulometric scale works well when the expanse of the natural landscape does not take on preponderant dimensions compared to the verticality of the built environment. That would prevent us from perceiving we are in urban surroundings."Similar principles guide Diller Scofidio + Renfro (with Hargreaves Associates and Citymakers) in its design for Zaryadye Park, the winning entry of a 2012 competition. It is the first large-scale park (14 hectares) to be built in Moscow in 50 years. Inaugurated in 2017 after 4 years of construction, the park lies along the Moskva River close to the Saint Basil Cathedral, Red Square and the Kremlin. It features a spectacular 70-metre V-shaped promenade that departs from two central points of the park and cantilevers panoramically over the river at the vertex. The site has rapidly become Moscow's new architectural logo, planting the city firmly in the global hemisphere of urban marketing. 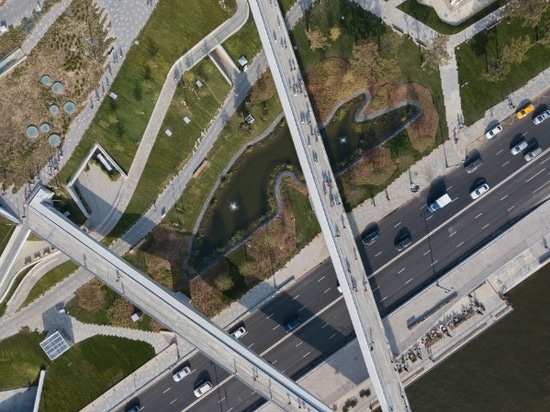 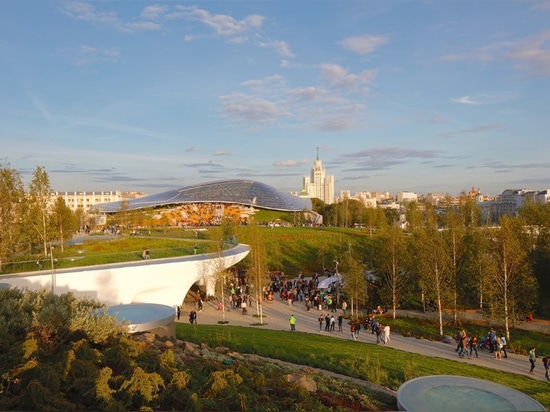 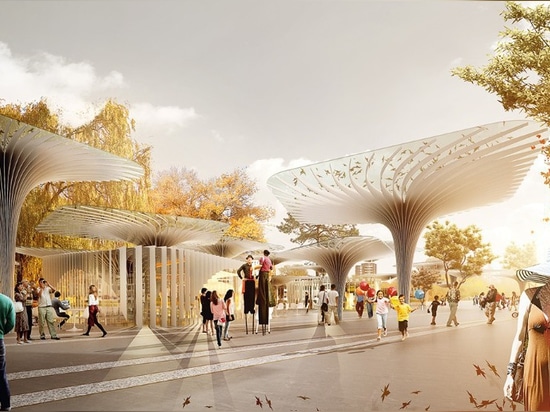