Project background, the continuing transformation of an old village into a new one

Wangjiatuan village is located in Zhangcun town, Huancui District, Weihai city, Shandong province. It's about a 30-minute drive from the city center. The village belongs to the scenic area of Likou mountain, which is one of the passes into the mountain. Its geographical location is convenient and important. The village is located in an east-west valley, North-south high, with streams running through it.The village form is long and narrow, the surrounding natural ecology is intact, the agricultural landscape resources are rich. There is a temple rebuilt in recent years on the east side of the village. The original structure of the village settlement is complete, with a large number of traditional dwellings built by rubble stone masonry, as well as objects carrying historical information such as teama stone, gate head, and stone pier. It is a typical traditional village in shallow mountainous areas of Jiaodong region. The village has a certain basis of tourism function. On weekends or in the flowering season, local residents of Weihai will come here for sightseeing. There are already some tourism supporting facilities in the village, but the scale is small, not systematic, and the space conditions are relatively poor, and the format of business is mainly farmhouse, lack of hierarchy and influence. Based on this situation, wang jiatuan hopes to organize existing resources, improve business forms, spatial quality and upgrade services. More importantly, through the shaping of space and architecture, the individuality and recognition of the village should be formed.

The Mica-Bar is converted from an ordinary civil house in Wangjiatuan village. The building itself does not have many features,what attracts designers is its location and its relationship with the environment. The buildings are located near the entrance of the village. Most of the surrounding buildings are old folk houses with rough stone walls. They are thick and simple. The buildings are connected to each other with high density. Unlike the old building, the form of the building is not traditional and the volume is small. The ground floor, which was originally flat roofed, was later added with a pitched roof due to its appearance.Metope is white coating, this appears with circumjacent massiness atmosphere "antipathetic". Buildings are not connected to other buildings. They keep a certain distance from each other and have a good visual distance. What's more unique is that it is built according to the stream, and the hanging corridor is also straddling the water surface, which is easy and elegant, with strong identification.

Attitude , a kind of qualitative change

The style of the new building should not be retro, on the contrary, the designer said: "it must be new!" The new building should provide the old village with a different atmosphere and new blood, just like the people it will serve in the future -- young, romantic and even a little bit restless and sexy at some time, the Mica-Bar should become a beautiful scenery line at the entrance of the village. At the same time, it should also belong to Wangjiatuan village. The preservation of important information of the original building, the control of its own volume and the "calm" appearance ensure the smooth dialogue and coexistence between new buildings and old buildings. Designers believe that the Mica-Baris like a drop of ink falling into a clean pool, which slowly diffuses and quietly penetrates into the clean pool. This diffusion process is the result of interactions between the molecules of water and ink. The Mica-Bar represents the city and the young people growing up in the Internet era, while the old building represents the village and traditional culture. The combination of the two makes the young people return to the village and help the development of the ancient village, which also adds vitality and enriches life.

Method, back to the future

The self-construction and authenticity of the original building are the first elements considered by the design team, the existence is reasonable. How to transform the original building on the basis of maintaining its features, so as to make it conform to the current function and form style, is the key point of the design of this case. The first is to do subtraction, clean up and dismantlethe original building added parts, including the temporary kitchen part and the roof. When these "whitewash products" are completely removed, the real architectural essence is revealed.

Then the designer began to add. In rural design practice, the key point is to balance the interests of multiple parties, including residents, government and operators. Rural design needs to respect the reality and the interests of residents. In the process of transformation, the usable area cannot be reduced, thus damaging the interests of residents. Following this principle, the design team added a new span on both east and west sides of the house to compensate for the lost area of the demolished kitchen, while creating a buffer of grey space for the building's entrance. By means of "supplementing", the "modern" building blocks of the original buildings formed accidentally by the self-built buildings are strengthened.

On this basis, the design team carried out in-depth discussions on different building facades. Facing the side of the river, the raised balcony became the focus of the design team. Five independent "boxes" of window type were inserted into the grey space between the balcony and the overhanging eaves. The ox-leg beam of the original building was carefully retained and exposed to form a bite with the newly added box. The design intentionally echoes the facade of the transformed building with the classical modernist architecture, which is actually very "modernist".The five newly formed scene-film display Windows form a dramatic relationship of "seeing and being seen" with the traditional folk houses facing each other across the river. The east and west facades use semi-permeable tiles that create interesting light and shadow effects at certain times. At the same time, the tile technique is also the medium between the residence and the new building, which shortens the distance between each other.

The interior design of the building continues to use the design elements of "white", with terrazzo, hollow brick, white steel mesh and log as the main spatial materials, creating a plain and slightly coarse spatial atmosphere. White becomes the basis of the space, like live a note, to create a variety of possibilities for the future."Window" the ground USES different color paint, appear bright-colored color below radial illuminate, reflect white space, clever reflect the active atmosphere that gives a bar.

After the transformation, the Mica-Barstill retains and even strengthens its "personality". It is in sharp contrast and dialogue with the surrounding natural environment covered by vegetation, streams and the thick and simple cultural environment of the ancient village. Such a strong visual impact and symbolic make the Mica-Bar become an unforgettable mark on Wangjiatuan village's external communication and an important node to promote Wangjiatuan rural tourism. At the same time, the design process for the new and old, look and be seen, authenticity and decoration of the relationship between the discussion, but also for the current rural construction of similarbuildings widely existing in the transformation and reuse of a small reference.

Continuation,listen to you and me

As night fell, the appearance of Mica-Bar made the quiet countryside a little lively. People can finally not have to rush back to the city to look for food, can finally carry a glass of beer, enjoy the sunset in Likou mountain, can also recall the childhood in the mountain wind. The Mica-Bar is like a slightly restless young man, In the daytime, it competes with the old buildings; Night, when the old people have been hidden in the night. 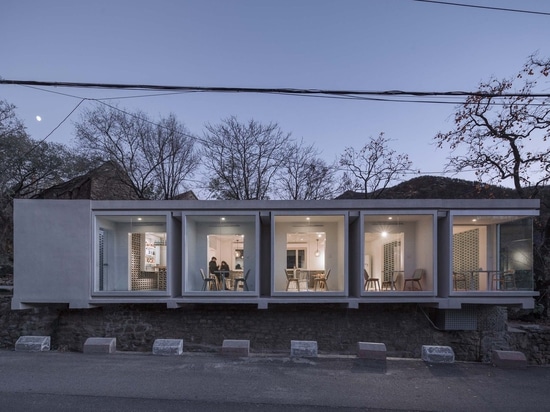 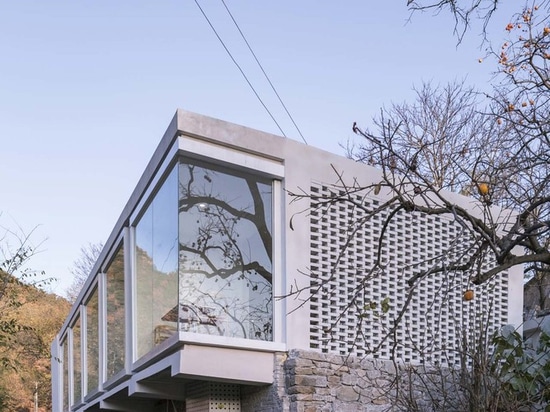 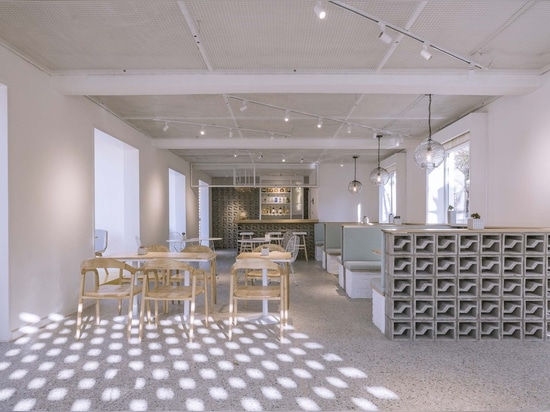 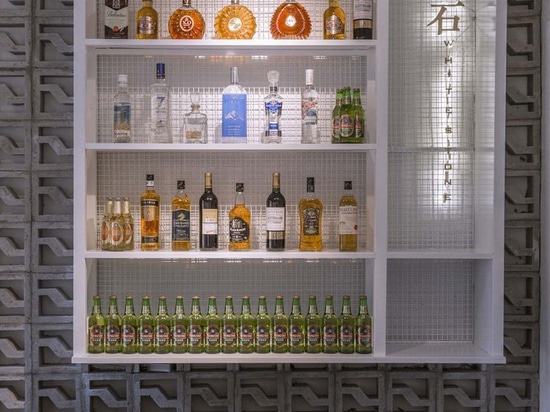 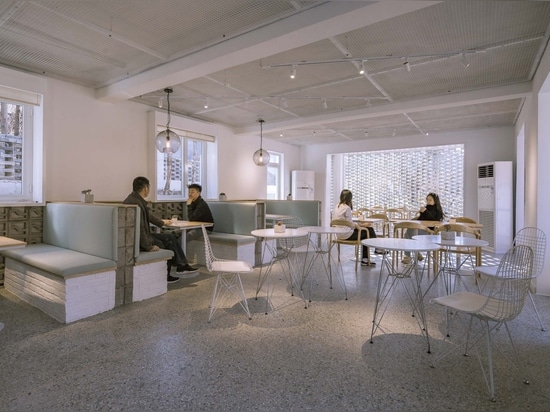 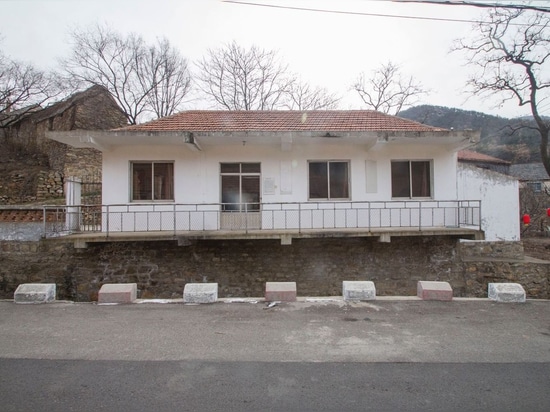