Clay walls and plenty of built-in storage feature inside this renovated and extended garden flat in northwest London by Rise Design Studio.

Located in Willesden Junction, the Birch and Clay Refugio project included the remodelling of the existing flat, the addition of a side and rear extension, plus a new workshop in the garden to be used as an office for the client's fashion business.

Created for a family of four – the client, her husband and two daughters – the flat was conceived as a series of flexible spaces that provide the maximum amount of storage.The 99-square-metre space is divided into two zones with living and working spaces at the back overlooking the garden, and bathing, sleeping and utility spaces at the front.

The colours and materials selected by the design studio were chosen to reflect the client's Persian Bengali heritage while also referencing her time spent living in Barcelona.

"We set out to create a flat for a family of five that maximised flexibility of spaces and storage solutions and reflected the family’s links with Barcelona," said Rise Design Studio. "Each space forms an emotional response through its materials and colours."In the rear half of the flat, an open-plan kitchen with birch plywood cabinetry and a lacquered concrete floor opens out into a living space with floor-to-ceiling sliding doors and a skylight. The living area overlooks the brass-edged, herringbone brick-lined patio and the workshop.

An extendable dining table separates the kitchen and living areas.

In the kitchen, a moveable island on industrial casters slides out from under an area of shelving that houses the oven. This allows the clients to create a large open space for house parties.

Meanwhile, a built-in storage wall in the living room features shelving and cabinets in six different shades of white, and also houses a hidden cat flap.

The kitchen, which is further away from the skylight and windows, features light grey plaster walls that maximise the light. The ceiling is left unpainted.

A small bedroom, which can also be used as a study, is located alongside the kitchen, separated by a sliding plywood door.

This long and narrow space opens up onto the central lightwell through a glass door on one side, and the rear patio with its strip of pink tiles that match the lightwell on the other. This rear-facing aspect is viewed through a trapezoid-shaped oriel window.At the other end of the flat, a dark entrance hallway features clay plaster walls punctuated with polished brass niches.

"The clay walls used throughout the flat were inspired by the dilapidated medieval streets of El Born and El Gótico of Barcelona," explained Rise director Sean Ronnie Hill.

"Clay was also chosen due to the fact that it requires no paint and it has health benefits, such as being non-toxic, breathable and humidity and temperature regulating," he told Dezeen.The master bedroom, immediately off to the left, is finished in a calming light grey-green shade with smoked oak floors. A simple grid of built-in storage cupboards with small black handles lines an entire wall.

The second bedroom, designed for the client's daughters, has both an adult-sized door and a smaller child-sized door painted in red. A plywood bunk bed with fanned sides inspired by a whale fin also houses a small play area with storage drawers underneath.The bedroom is painted in a very light pastel pink colour, contrasting with the dark hallway and giving it a distinct identity.

The bedroom opens out onto a lightwell paved with tiles made in six shades of pink inspired by the architecture of Barcelona. The lightwell leads through into the study bedroom and is also overlooked by the bathroom.

The flat's dark grey blue bathing space references the client's two daughters' love of sea life, in particular the blue whale. The blue tadelakt walls and floor are contrasted with the ceiling, which is made from birch plywood fins routed into plywood back board."The only existing item remaining from the original flat was the boiler, as it was an ex-housing association flat," Hill told Dezeen.

"The layout of the master bedroom and girl's bedroom were changed to create maximum efficiency of space in terms of layout, as well as carving out a generous entrance and exit space."

"The proportions of bathroom space were aligned with the lightwell, protruding slightly into kitchen space. All walls were upgraded acoustically."Fronted by a large blue door with circular windows, the plywood-lined workshop sits at the back of the rear patio, with a foldable table at its centre.

Black mild steel pivot lights that allow for four different configurations of the space were designed to provide flexibility. Their wall-mounted design also avoided the need to create holes in the ceiling and therefore reduces the amount of noise transfer from the first floor flat above as much as possible.

Matching miniature birch plywood pivot lights, also custom designed by Rise, were also installed in the master bedroom to enable bedside reading.Other projects completed by London-base Rise Design Studio include a glazed extension to the rear of a house in London and the refurbishment of home in a 19th-century mansion block, also in London.

Hill said the biggest challenge of Birch and Clay Refugio was the "very tight budget and trying to ensure maximum flexibility of every inch of the space".

"There was a constant evolution of every aspect of the design from the black mild steel pivot light fittings, the miniature plywood bedside pivot lights in the master bedroom, plywood catflap, the plywood cylinder light in bathroom, and constant iterations of built-in joinery design." 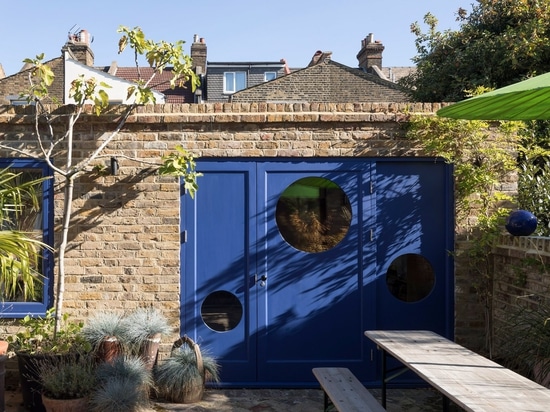 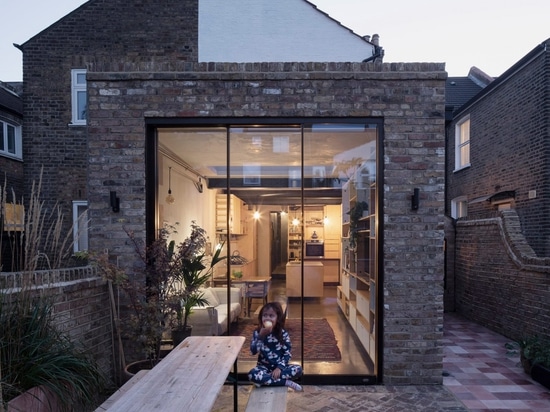 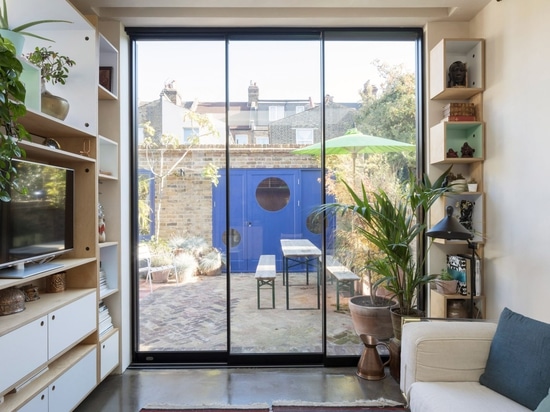 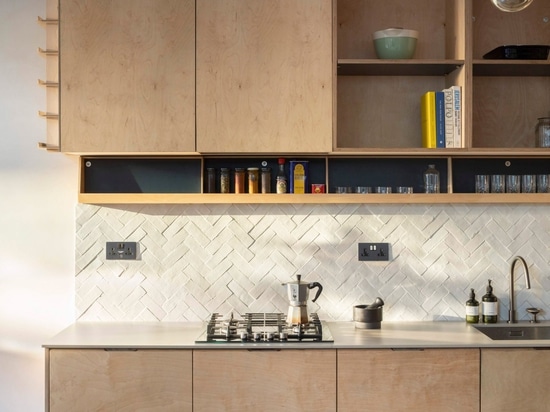 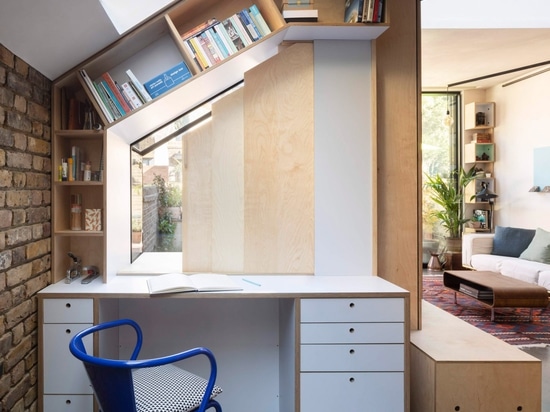 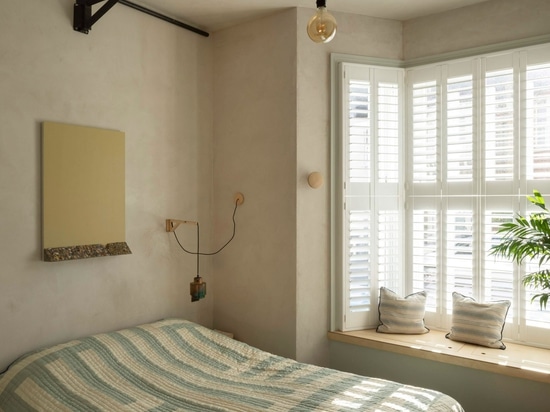 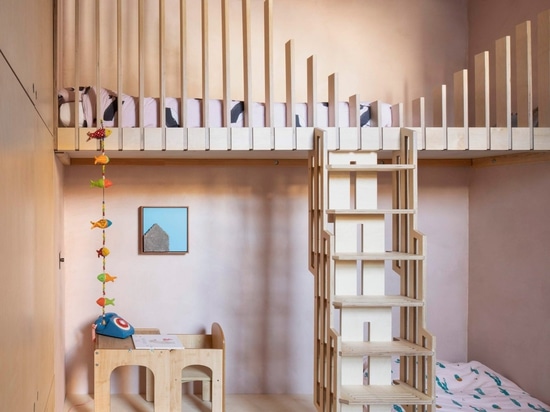 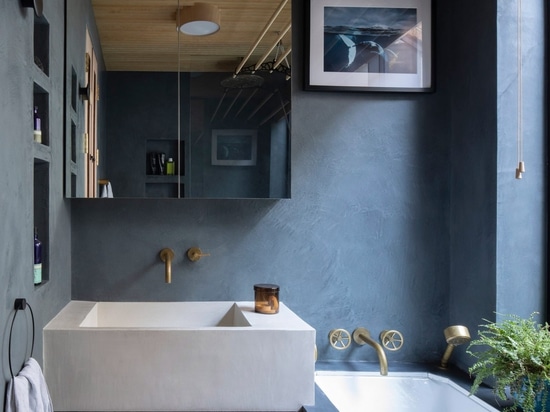 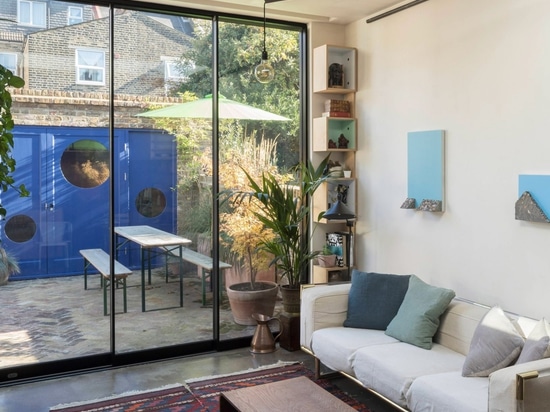