gone are the days where a few years of formal education can suffice for the length of a career.

rapidly changing technologies, regulations, procedures, and business practices can turn what was once a complete educational degree into a mere beginners course. the general conception of learning and honing skills is in need of a fundamental review. learning must be undertaken constantly to adapt to our ever-changing reality. the adult education center ‘HF & VUC fyn’, by CEBRA, hopes to play an essential role by maintaining the levels of adult competences in the workplace.

the specialized school was designed to adapt to each student, rather than the student to the building. the plan is filled with dozens of specialized, diverse environments, where pupils can choose based on their own preferred learning styles. the volume is characterized by a system of curved lines and rounded forms that cut through a semi-rectangular block. a resulting multifaceted spacial system delineates the school’s different functions, including: an arena for teaching and learning, workplaces, and commons areas for a constantly changing, diversified group of users.

all activities are organized around a transparent atrium space called the ‘agora’, named after the public gathering space in ancient greek cities that were the centers of political, spiritual, and artistic life in the town. the room not only functions as a form for social functions, but also as a fluid learning environment that professors and students can utilize. rounded shapes creates a series of balconies and platforms that overlap at varying degrees, layering single, double, and triple height areas with corresponding degrees of daylight, transparency, and intimacy.

moving from the central area, the hustle declines and smaller, calmer, private study nooks can be found. the same organizational system that moves outwards also moves upwards. while the commons area — located on the first floor — deals with large levels of movement, the second and third floors are quieter, giving plenty of room for contemplation and involved academic work.

outside, curved incisions cut into the building to continue the interior dialogue; and lets the façade interact within the surrounding area. around the main entrance, where there is also a café, CEBRA placed a roofed outdoor patio. in various areas on the edifice — including upper floors — there are terraces to reconnect students to the outside world.

the structure itself is composed of a pattern of aluminum cover plates and expanded aluminum mesh. the materials were chosen for two reasons, to relate the exterior to its surroundings and draw connection to the nearby industrial harbor. and secondly, to contribute to a changing expression that moves throughout the course of the day depending on sunlight and weather. during the night, selected sections are backlit with LEDs to accentuate the building.

the ‘HF & VUC fyn’ adult education center marks and important step towards the realization of a campus that ties the urban area of odense, denmark to the harbor. the form is able to accommodate 1,300 students, and offers many suggestions to possible ways of use for an intuitive learning environment for each within a space for many. 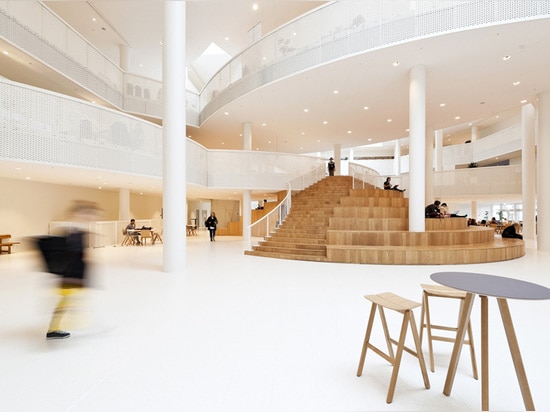 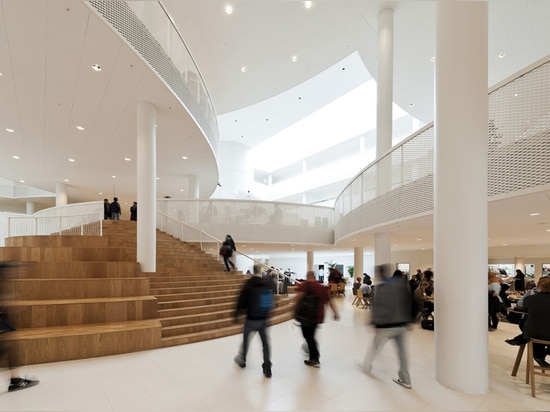 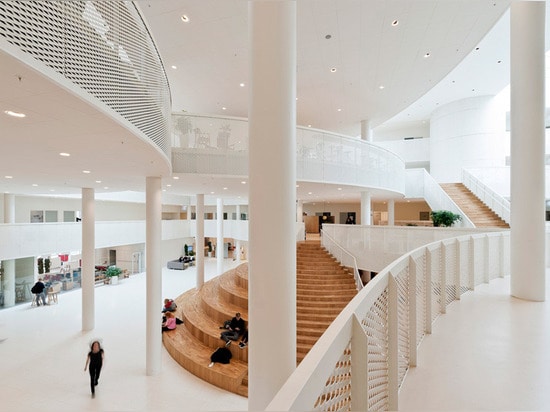 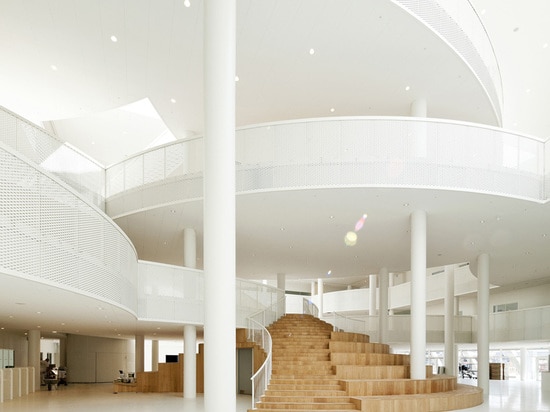 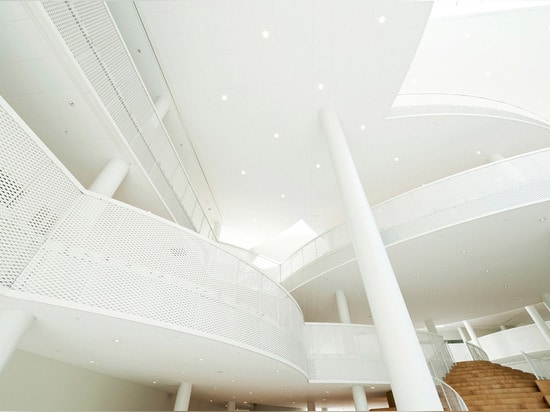 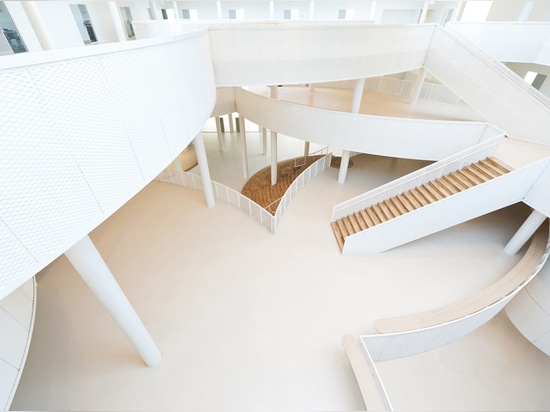 view from the top floor towards the main entrance