Located in Tamsui, a seaside district north of Taiwan’s capital, this new one bedroom apartment by Taipei and Shanghai-based Wei Yi International Design Associates embraces poetic minimalism as a paean to the surrounding natural landscape

Lying between the estuary of Tamsui River and the mountainous Yangmingshan National Park, the area, despite its urban character, is blessed with natural landmarks including an adjacent mangrove forest and wetlands reserve. The surrounding natural beauty, and in particular the ocean that resplendently looms on the horizon, was the initial inspiration for the project named “Blue Eye”—blue referencing the ocean as well as “the tears of the Earth”, as the architects explain in a valiant effort to draw attention to the preciousness of nature and its precarious future.

The designers approached this project as an exercise of artistic expression underpinned by a desire to create a unique space connected to nature where the owner’s pursuit of serenity could also be rewarded. Based on a nuanced palette of grey hues and the predominance of concrete surfaces, the apartment is a marvel of minimalist design and conceptual rigor, unfolding as a spacious living room that opens up onto an open-plan kitchen and dining area, both enjoying expansive vistas of the estuary and the surrounding hills, as do the bedroom and bathroom further on.

Despite the monochromatic colour palette, the concrete landscape that the designers have conjured is anything but monotonous. A variety of concrete finishes and textures - from polished, to stained, to rough stucco - create a rich spatial tapestry, made richer by the shifting light and moving shadows as the day progresses, while a series of geometrical volumes, recesses and niches create a sculptural morphology that poetically reflects the neighboring wetlands.

The predominance of concrete is enriched by the subtle presence of complementary materials such as copper, iron, timber and marble, featured in bespoke furnishings and select artworks, as well as by a small cactus garden in the living room. By the entrance, a hundred-year-old hemp carpet from Uzbekistan hanging on the wall adds splashes of colour, while its worn out quality is lyrically juxtaposed with the robustness of the concrete surfaces. A similar juxtaposition is provided by a sculptural trio of timber posts made out of weathered Taiwan cypress, referencing Taiwan’s architectural heritage.

The solidity of the concrete volumes is further contrasted with the floor-to-ceiling partitions/bookcases constructed out of slender copper rods which appear as ethereal frameworks magically sketched by some invisible hand. As eye catching, a custom-made burgundy chandelier of curved metal strips above the dining table was inspired by the iconic Guandu Bridge, a red arch bridge over the Tamsui River that can be seen in the distance. In the bedroom, an upholstered dark grey headboard set against a white marble wall makes a luxuriant yet austere centerpiece, while the use of cement and bleached colour-washed plaster in the master bathroom, seductively illuminated by filtered daylight, creates a meditative ambience which echoes the contemplative tranquility of nature, and evocatively encapsulates the architects’ intent. 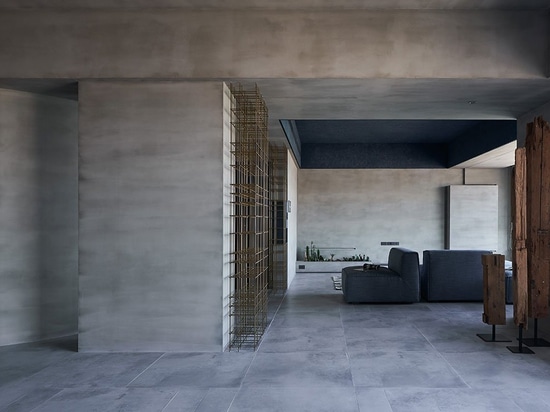 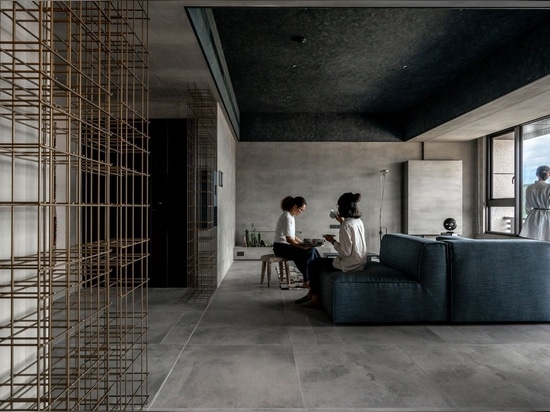 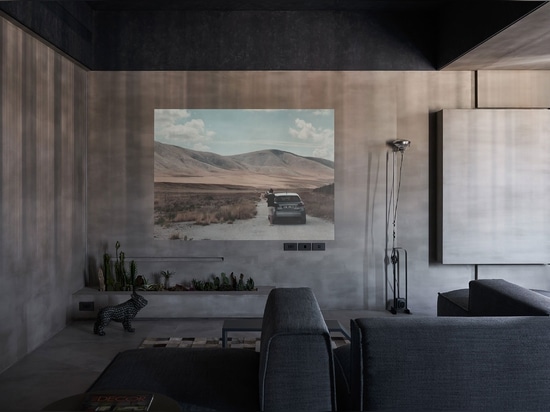