The sports arena, with match seating of up to 11,500, will be the future home of German ice hockey champions Munich Red Bulls and German basketball champions FC Bayern Munich.

To improve the local sports infrastructure for schools, amateur clubs and young talents, three additional canopied ice rinks will be built next to the sports arena as training facilities and for recreational use. Therefore, a comprehensive agreement on guaranteed opening times for the ice rinks has been closed with the City of Munich. The building owner of the project is Red Bull Stadion München GmbH.

Located in Olympia park, a significant historical setting for modern architecture, the project required an approach based on both humility and audacity. 3XN focused on acquiring a deep understanding of the original design and the mind-set behind it. The guiding design principle focuses on sport in the landscape, echoing the motto of the 1972 Olympics, “Olympic Games in the green” and the sense of boldness and optimism reflected on the original vision of Günter Behnisch and Frei Otto. Extending the original purpose of the Olympia park the project adds new contemporary indoor and outdoor sports facilities for the visitors of the park.

The new sports arena is a separate oval structure that naturally and respectfully melds into the world-famous Olympic Park with its many iconic buildings. This impression is enhanced by the green roof and vertical facade structure. The facade is dominated by vertical lamell as, swinging upwards over the glass-paneled entrances which are thus beautifully accentuated. The training areas are partially underground and modelled to forma green hill, picking up the topography and enabling a coherent continuation of the pathways and landscape design of the Olympic Park.

The asymmetrical shape and height of the arena are informed by the site’s characteristics, demonstrating respect towards the original vision of an organic architectural landscape. The arena’s oval, organic, light and playful form mirrors the gently undulating curves of the surrounding landscape creating forms in the landscape rather than buildings. The building, in addition to the bowl of the arena, contains three training rinks, changing rooms, offices, a rooftop bar, a cafe and an underground car park.

The arena is naturally integrated into the landscape and has direct access from the ground level. The manmade hill that covers the training rinks provides direct access to the arena and adds new public recreational areas to the park. To facilitate natural way finding, the façade around the entrances is raised, making them visible from afar and adding vitality and variation to the façade. Entrances are distributed all around the building and the design influences spectators to move intuitively towards the opening.

The bowl of the arena is shaped as a single continuous form that ensures great visibility, providing the most intense visual experience for all spectators. With a simple expression and a strong identity, which gets fully integrated within the historical setting, the Sport arena will become a distinctive new landmark in Olympia park. 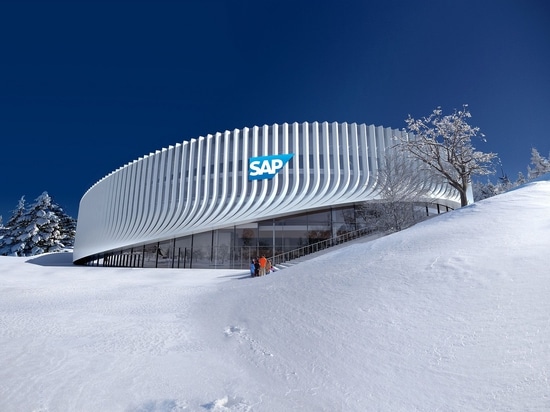 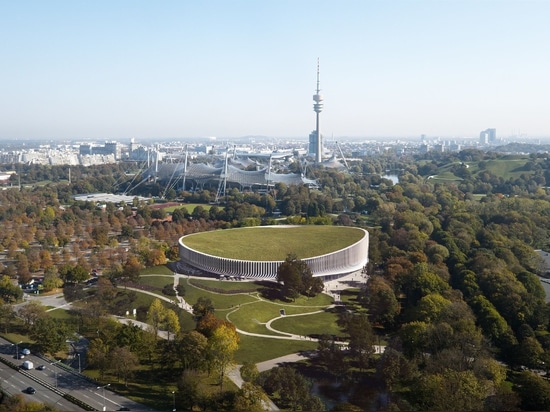 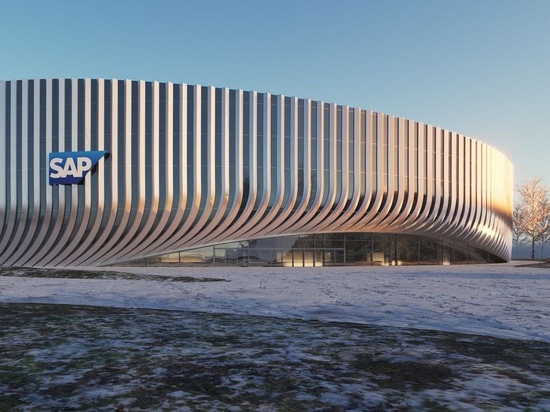 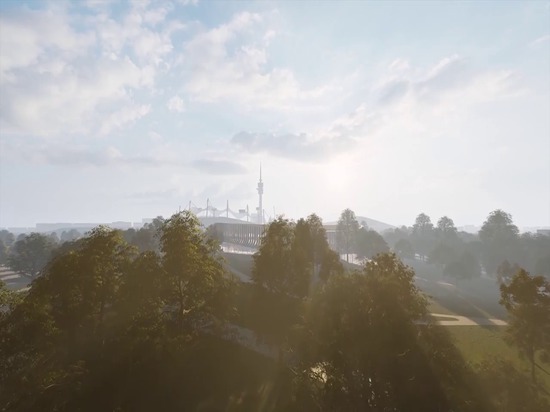