Peter Hall Performing Arts Centre has a triple height glazed foyer with a timber ceiling designed by Haworth Tompkins for a school in Cambridge.

The Perse School's new theatre can seat up to 400 people and has a naturally ventilated glass foyer. It's named after a former director of the National Theatre, who attended the school in the 1940s.

The Peter Hall Performing Arts Centre also contains a rehearsal and teaching room, back of house spaces and an exhibition space.

"Technical spaces were designed to allow pupils to learn about lighting, sound and stage engineering design. The building aims to teach pupils about theatre holistically."Alongside the auditorium, a suite of classics classrooms sits in the newly built, pale-brick Rouse Building, which has its own separate entrance and also connects to the eastern edge of the hall.

The timber-framed glass box of the foyer, which sits to the north of the plan above a precast concrete base, is a the heart of the school's new masterplan.It serves as a cafe for pupils and staff during the day and as a foyer for audiences during events in the auditorium.

"Porosity between the cultural institution and the public realm is certainly a recurring theme for us" said Daly. "But here the performing emphasis was on the foyer as an extension to the outdoor play space and circulation systems within the school campus."

Brick paving surrounds the building and continues into the foyer, where doors open directly out onto the surrounding landscape. At night, the glass box becomes a beacon visible from the far end of the courtyard.

To contrast with the pale timber of the foyer, the auditorium is lined with dark timber and its wool-upholstered seats have a palette of autumnal colours.

As with much of Haworth Tompkins' theatre work, materials have been chosen for durability and their capacity to mature over time. Finishes were kept relatively simple to contribute to the mix of various styles already on campus.

"The new building needed to reconcile a context of disparate styles and scales and be a calm, formally symmetrical centrepiece for the emerging campus masterplan," added Daly.A specially commissioned textile work, designed by artist Victoria Morton and produced by Dovecot Studios in Edinburgh, hangs in the foyer.

Haworth Tompkin has also refurbished the Bristol Old Vic, adding a new public foyer to the Grade I-listed building that could act as a "public room" for the city. 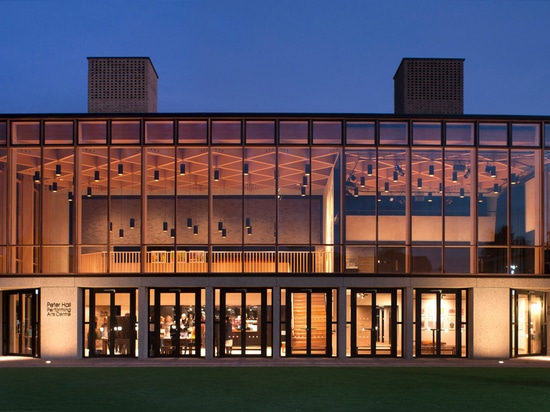 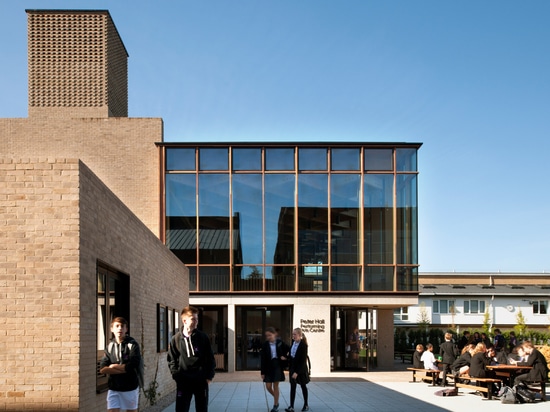 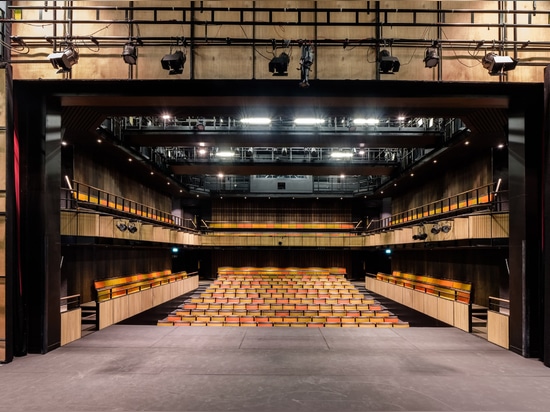