construction on oma‘s pyramid-shaped ‘xinhu hangzhou prism’ has begun in china. a pinnacle reaching into the sky, the prism pays homage to an ancient saying that there is ‘paradise above, and hangzhou below’. the prism is complemented by an adjacent 35,000 m2 residential tower, reflecting the geometry of a prism in its façade.

the mixed-use building, which is part of a development project commissioned by zhejiang xinhu haichuang group, forms the heart of the city’s future tech city in the new technology central business district (CBD). the complex will house a hotel, retail space, lofts and an atrium garden. the 50,000 m2 prism is shaped by two radical oblique cuts through the building envelope, creating terraced lofts with generous scenic views. a large interior void creates a publicly accessible garden with water features and playgrounds.

‘hangzhou, the capital of zhejiang province, is rapidly developing into an important tech-hub‘, the practice said in a statement. ‘[it is] home to some of china’s largest technology companies (including alibaba group holding and netease) and a burgeoning start-up scene. hangzhou competes with beijing and shanghai to attract china’s new-economy workforce and young tech graduates.‘

‘xinhu hangzhou prism will encourage the development of a creative community in the new CBD of hangzhou‘, explains chris van duijn, lead architect on the project alongside michalis hadjistyllis. ‘the design enables flexible programming and a broad repertoire of communal outdoor spaces, while maintaining a strong visual identity: striking in its form, archetypical yet contemporary.’ 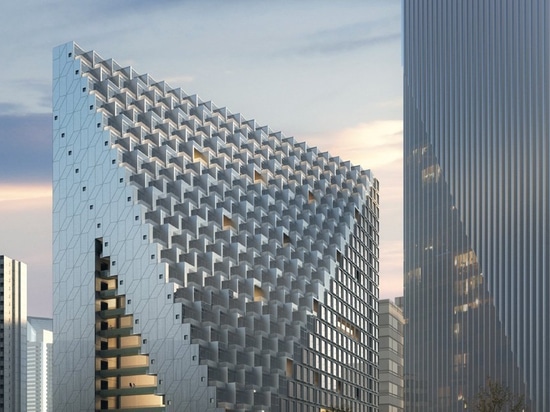 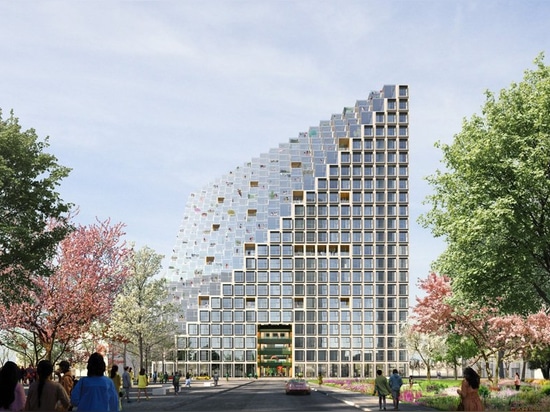 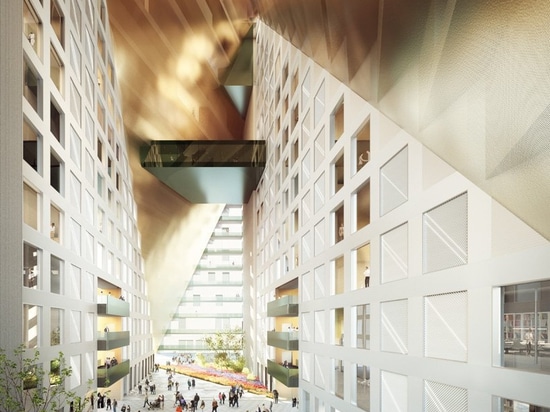