Ohio’s iconic big basket building is back on the market

A year after Newark, Ohio’s famed Longaberger basket building was sold, the seven-story “Big Basket” is back on the market.

The 185,000-square-foot office building was designed by NBBJ and Korda/Nemeth Engineering as the headquarters of the Longaberger Co., which produces pottery and baskets (or used to—Longaberger went out of business last year). The “Big Basket,” complete with enormous heated “handles” that arc over the building, was built in 1997 and resembles the company’s Longaberger Medium Market Basket.

Preservationists breathed a sigh of relief last January when the vacant basket and its 21-acre campus were purchased by Ohio developer Steve Coon for $1.2 million. Coon had pledged to restore the building, working with Cleveland’s Sandvick Architects to keep the unique basket shape intact.

At the time of the sale last year, it looked like a triumphant story of revitalization for a failing landmark; community members had been paying the Big Basket’s utility bills, and the development team was going to nominate the building to the National Register of Historic Places.Now, interested parties can once again buy or lease the giant facsimile for an undisclosed price. After a year of renovations, Coon has listed the building through the real estate brokerage NAI Ohio River Corridor. The NAI listing floats several potential uses for interested buyers, such as converting the basket into a hotel, conference center, condo building, or coworking space.

The building’s restoration was completed quickly, in part thanks to the relatively good condition that Coon purchased it in. From the photos, it appears that the cherry wood used for the basket’s interior and the seven-story, 30,000-square-foot internal atrium may have been kept intact, along with the building’s “woven” facade. 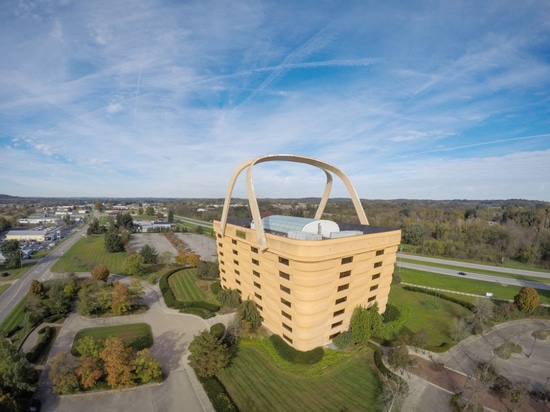