Norman Foster has jumped into the international competition to design a replacement spire for Paris’s Notre Dame Cathedral, proposing a glass-and-steel topper to replace the cathedral’s ruined roof.

According to an interview in English publication The Times, Foster presented his vision for a new “light and airy” roof for the fire-ravaged cathedral. The previous attic space dated back to the 12th century and was nicknamed “The Forest,” as it contained a tangle of 1,300 timber frames, each coming from a unique oak tree—the sheer amount of wood likely fed the fire that ravaged it last week.

Foster’s updated vision for the cathedral calls for installing a glass topper, arched to mimic the original wooden roof, ribbed with lightweight steel supports. The new spire would be made of glass and steel and could potentially include an observation deck at its base.

“In every case, the replacement used the most advanced building technology of the age,” Foster told The Guardian. “It never replicated the original. In Chartres, the 12th-century timbers were replaced in the 19th century by a new structure of cast iron and copper. The decision to hold a competition for the rebuilding of Notre Dame is to be applauded because it is an acknowledgment of that tradition of new interventions.”

The modernization scheme drew an immediate reaction online, where social media users compared the revamped cathedral to a Foster-designed Apple store or the glass Reichstag dome in Berlin. Additionally, several people pointed out that the plan to flood the interior with light would be hamstrung by the stone vaulted ceiling below the attic space and would blow out any light coming in from the historic stained-glass windows.

It’s a Gothic cathedral not a conference centre in Essex.

Of course, Foster isn’t the only architect to propose a radical overhaul of the 19th -century spire. Belgian artist Wim Delvoye, known for his neo-Gothic, laser-cut steel sculptures, announced last week that he would be entering the design competition as well.

Since the international competition was announced, plenty of people have gotten creative in envisioning “adaptive reuse” projects that give the historic cathedral a bland, modernist overhaul without regard for its surroundings. Even though these have been done in jest, some of them have come quite close to what Foster has proposed. 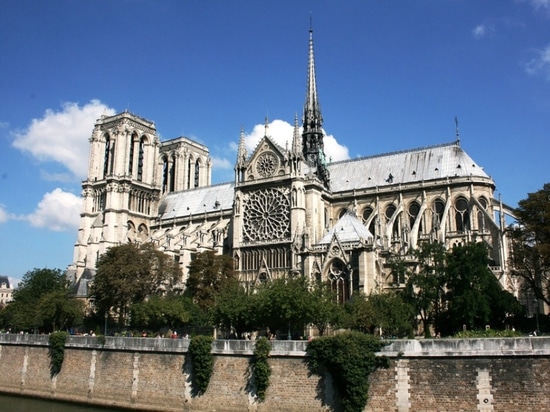 The bell towers, situated at the front end of the cathedral, held the vaults of the nave in place. (Via Pixabay)