In its expansion plan for a successful dairy business based in Northcliffe, Western Australia, Bosske Architecture has explored the architectonic potential of the farm, finding a solution that is utilitarian and agricultural, yet corporate and spectacular.

Seven kilometres east of Northcliffe, a small town in the lower south-west of Western Australia, is the recently completed Bannister Downs Dairy Creamery designed by Bosske Architecture. A place with tall trees and high rainfall, this was one of the first areas to be opened to dairy farming in Western Australia, through post-World War I government Group Settlement Schemes in which British would-be farmer immigrants received dairy cows as incentive for clearing land.

The Daubney family are third-generation Northcliffe farmers, who, after the deregulation and resultant destabilization of the dairy industry in 2000, recast their farming practice as a vertically integrated dairy farm, a grass-to-gate business. Cows are milked on the property where they graze and the milk is processed, packaged and dispatched from the same place. Bannister Downs Dairy is an agribusiness success story. High animal welfare principles; a focus on animal, land and human health above yield; minimal processing; chalk-based biodegradable packaging; and a palpably identifiable family-run farm have led to a highly recognizable, premium brand.The success of this venture led to a need for expansion to allow production capacity to increase. Bosske Architecture was asked to design this expansion – an on-farm facility to house milking, processing and the dispatching of dairy products along with administration and staff areas and a variety of visitor spaces from which back-of-house operations could be viewed. It’s important to make the distinction that Bosske was engaged to design an expansion rather than a building. A remarkable new building has resulted, but it’s part of a broader set of considerations and a discursive process. While a lucid site strategy was key to the project’s success, this lucidity is neither reductive nor frugal nor elemental. It homogenizes, yet it resists being summarized. It is utilitarian and agricultural, but also corporate and spectacular.

At the project’s opening, the client said of Bosske principal Caroline Hickey that “she understood the vision of the project better than I did.” The brief called for the propinquity of cows, processing and people – a new typology that unites farm and factory, which have traditionally been separated, even in vertically integrated models. After exploring multiple sites and approaches, an ideal site was found for the project. By grading to the edge of a contour, a pebble-shaped, gently prominent, free-draining plateau was made. The building at the top of the hill is an architectural trope – a silhouette, citadel or temple. The ingenuity of the masterplan is its binding of this contour with a swept path, a ductile loop that organizes program and explicitly defines what is farmyard and what is farm. It allows activity and expansion within it – a campus approach – but prevents development beyond it. It pre-empts and contains the ad hoc accretion of infrastructure that characterizes farm settings, often stringing haphazardly beyond the farmyard.Three breaks in the loop admit people, cows and heavy vehicles from different directions. Because all vehicle movement is contained within the site, the landscape can come right up to its perimeter, immediately grounding the project. Along its western edge, the loop solidifies, sweeping through archetypal “barn” sections, from gable to gambrel, which house the front-of-house public and administration areas. Back-of-house processing and service areas stack behind in a series of single-pitch lean-tos inclining into the middle of the site. These are deliberately clunky, formally addressing the over-large scale of the cow and the truck, and clearly reading as recessive and utilitarian – like built shadows behind the strong, lustrous, red, anodized front of house that meets the scale of cars and people.

Bosske Architecture has, in this project, furthered an exploration of archetypes and our reading of them, following the oast-like Camino House, the figured Omeo House and the Block Branding headquarters starburst. In the creamery, the archetypal barn and shed generate sectional shifts in the loop and let us recognize both the familiar and unfamiliar between them.

The loop, a swirling, sequential, non-uniform figure, alludes to the many circular processes the project encompasses – the rotary dairy, seasonal and circadian routines, rolls of flatpack packaging, centrifugal separators, digestion – and gathers program into its form. It is cut to reveal its archetypical sections and mark entry, peeled and lifted to make openings and an upper terrace, and sectioned to make an external colonnade. It frays and inverts at its ends as if it’s been teased apart or is still moving or still performing. It’s a device that allows for both variety and integration. It anticipates future bits of itself materializing as needed around the site.Binding the edge of the contour also means that the built edge is convex, so from ground level you can never see the whole thing – it’s always slipping around the corner. The creamery’s distended elevation and undulating peristyle, formed by the natural variability of its generating archetypes, is speculative rather than succinct. Its likeness to a barn cannot be easily summarized as it bows, dips and arcs away. Sunlight is unpredictably thrown from its surfaces. There’s a sense, from the public side, of knowing there’s a back to this building but not being able to get around to it. From inside, views array outward rather than line up. Howard Taylor, a prominent painter and sculptor, produced much of his work, centred on his particular reading of the local landscape and its sublime qualities, from his studio near Northcliffe. He persistently explored the formal potential of surface, investigated the nature of perception and conveyed the “velocities of nature.”1 The creamery, like a Howard Taylor sculpture, refuses to be static. It induces us to move around it and to interpret it. It’s an architecture intending to be read, a means for expression.

None of this, however, is at odds with what is also an efficiently planned, functional and highly technical facility. Like a built flow diagram, the arrangement organizes milking to dispatch in a streamlined, linear sequence. Cows enter the voluminous robotic dairy, which has large openings for ventilation and views. The high hygiene standards of the production areas have been enhanced by cool, clinical architecture. Visitors are generally contained at the southern end of the building, with a foyer on the ground level and cafe above. However, two corridors stretch the length of the building, from cafe to dairy and back again, separating administration and back-of-house areas. They provide an exhibition space on one side and a viewing gallery into production areas on the other. It’s a fascinating insight into cutting-edge technology and into what is clearly a designed environment rather than an engineered solution. It allows you to follow the line of milk, from cow to cafe. The corridors don’t take on the swirling language of the external edge, but instead are like core samples through the flow diagram.

The design of the creamery exploits the architectonic potential of “the farm,” with its various pre-existing forms and modern industrial processes. It reminds me of Hugo Häring’s 1926 Gut Garkau Farm project, a commitment to organic functionalism. However, Häring made a distinction between form derived purely from the expression of a functional task and form driven by abstract or geometric organizing principles. Bosske Architecture has demonstrated, in the design of the creamery, that it’s possible, credible and laudable to do both. 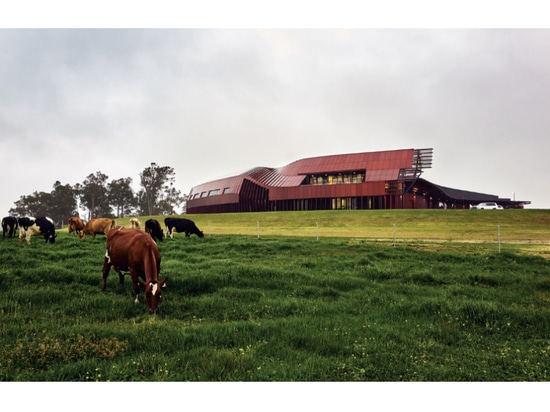 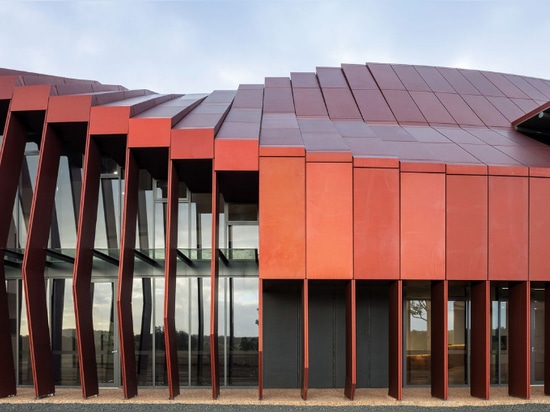 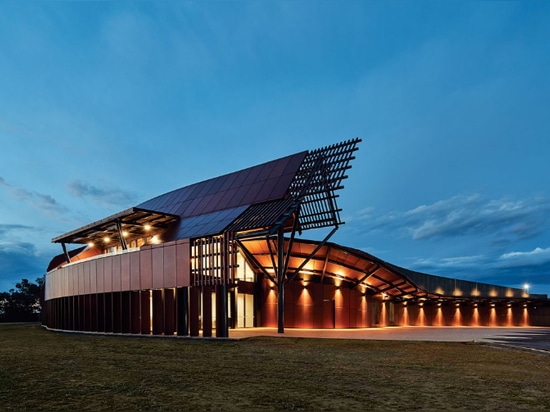 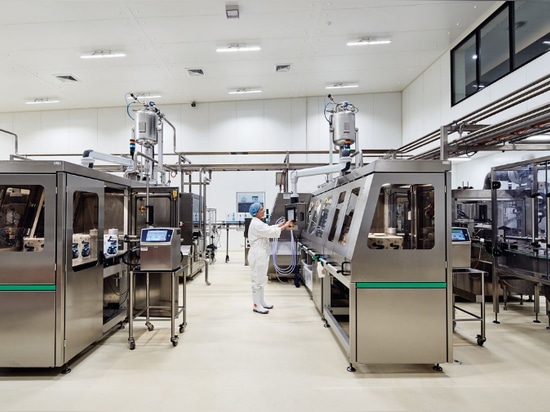 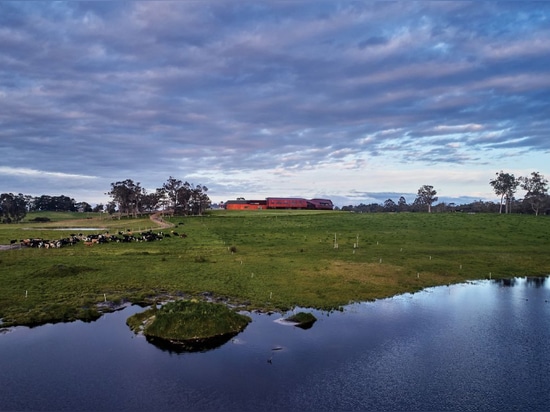