The outback tourism economy has been a talisman to drought-ravaged Queensland. Cox Architecture’s Waltzing Matilda Centre is a tribute to the community of Winton, embedded in the rugged landscape that inspired the ballad to which it is dedicated.

We approached the Waltzing Matilda Centre by Cox Architecture at Winton as fly-in fly-out grey nomads. A hire car trip across central Queensland took us through six hundred kilometres of parched, cracked and de-stocked plains that hadn’t seen useful rain for eight years. Amid the rural heartbreak, the state’s outback tourism economy has been growing strongly, a record $602 million in the year ending 2017.1 A mix of rivalry and cooperation between the towns of the region has produced an impressive architectural trail.

Driving west from Emerald, we followed the route of the momentous 1891 shearers’ strikes. Barcaldine’s role at the start of the labour movement is told at the Tree of Knowledge Memorial and the Globe Hotel renovation (M3architecture and Brian Hooper Architect, 2009 and 2015) and at the Australian Workers’ Heritage Centre, the highlight of which is the Daryl Jackson-designed big top from the travelling Australian Bicentennial Exhibition (1987–88), which has found a permanent home here. Each of these tells the story of unionism and the birth of the Labor Party. Longreach, in contrast, celebrates pioneering pastoralists and entrepreneurial aviators at the Australian Stockman’s Hall of Fame and Outback Heritage Centre (Feiko Bouman, 1988) and Qantas Founders Museum (Noel Robinson Architects, stage 1 2002, stage 2 ongoing). A final essential stop on the road into Winton is the remarkable Australian Age of Dinosaurs, an architectural precursor and companion to the Waltzing Matilda Centre also designed by the Cox Architecture team, led by then director Casey Vallance (stage 1 2012, stage 2 ongoing).

An earlier Waltzing Matilda museum was destroyed by fire in 2015, leaving a raw hole in the main street of Winton and causing the loss of valuable artefacts and documents recording the creation of the famous song in the Winton district in 1895. The decision to rebuild won enthusiastic community backing and government support. In the 2016 architectural competition, Cox Architecture won the challenge to design the world’s first museum dedicated to a song.

The long, straight road from Longreach runs through dry flat plains, with a series of mesas or jumpups appearing on the horizon only as we get closer to Winton. In town, the highway runs parallel to the main street. The Waltzing Matilda Centre, with entries from both roads, is unmissable and unexpected.

Winton, population 875, is a typical outback town of wide flat streets, verandah-ed pubs and formal-fronted shops with corrugated sides and junkyard backs. In this streetscape, the new centre looks like a geological monolith, a translocated jumpup with rough, undulating earthy red walls, deep shadowy recesses and a series of irregular projections darkly silhouetted against the cloudless sky. As we approach it is clear that the geological associations are deliberate. The external walls have the colour and texture of termite mounds and are studded with chunks of opal-bearing rock.

The boulder opal of the Winton region forms as seams of common “potch” or precious “fire” in fractures within rounded ironstone nodules. The geomorphology of the gemstone and the jumpup are metaphors evoked by the architects to embed the building in the landscape of the region. Planning geometries are a matrix of convex forms and concave volumes fractured by angular planes.

The entry foyer is a top-lit chasm that cleaves through the building, opening a path to outdoor performance spaces and rustic exhibition sheds at the back of the site. The street-front cafe and gift shop are cave-like erosions onto the street, while the reading room is a taller cavern space lit by irregular shafts of light.

Loose patterns of perforation mark the edges of rusted steel planes and cast speckles of bright sunlight into dark shadows. The pattern recurs elsewhere as spots of precious gold in the potch of translucent glazing. Beautifully crafted light fittings repeat this pattern as perforations in polished gold ribbons, abstracting the museum’s theme song punched into pianola rolls. The unfurling ribbon form recurs as a curtain of translucent rods at the centre of the major exhibition space. Gentle flowing ambient music and slowly twinkling blue projections create

a poetic evocation of the billabong at the heart of the building, a beguiling object/space for dreamlike projections and reflections.

Arterial Design’s exhibition design is arranged sequentially around the indented perimeter of the main hall, starting with Banjo Paterson’s words, Christina Macpherson’s music and the subsequent adaptation and adoption of Australia’s “unofficial anthem.” The middle sections document and interpret key facets of the natural and social history of the region. The final sector returns to artistic representations through cinema and photography of the local landscape and its identities. Audio headsets augment the interpretive experience with snippets of audio narrative and interviews with locals.

At regular intervals the houselights dim, headphones fade and a resonant bushman’s

voice rises as projections animate the billabong: the anthemic story of the song; a creation story linking stars and earth in opalescence; the grim impacts of drought, dust and heat; the relief of rain and regrowth; and hypnotically swirling, chirping flocks of budgerigars, the “beautiful plague” in seasons of plenty.

The languid tones of the narrator, drifting snatches of audio and the rhythmic rise and fall of light in the darkened room create a lulling, ephemeral, slightly ethereal experience. After the full cycle of immersion, the song itself remains a riddle. Is it a requiem to rebellion or a rollicking knees-up? Is it the tale of an opportunist, an anarchist, a jolly soul or a jolly nuisance whose tragic fate is suicide, or is it homicide?

The architecture of the centre is equally slippery. Geometries and spaces shaped for experience conceal any constructional logic. Strong light and deep shadow give a shifting, abstract overlay to a material palette that spans from rust to gold. Details are strong, sometimes delicate, sometimes with the rude panache of the bush mechanic. The geological analogy is omnipresent – there are literally opals in the polished concrete floor. Alvar Aalto-esque undulations imply landforms, water and music, but other figuration in the centre remains mysterious. The bold but blankish signage elements are particularly inscrutable. The dark profile could suggest an upraised hand, a horn, a roo, the silhouette of a battered hat, the shadow of a swag … perhaps a ghost may be seen.

On the drive home, we reflected on the moving stories of outback endeavour and sacrifice in peace and in war that are so marvellously recorded by the museums and memorials of Western Queensland. There remains, however, a significant and noticeable imbalance in the overall historical narrative. The epic history of Aboriginal people as the pioneers of life

on this land for millennia, and their experiences at the colonial frontier and today, remains under-represented and under-researched. It is my hope that the voices

of elders past, present and future will form the primary focus of the next major cultural project in the region. 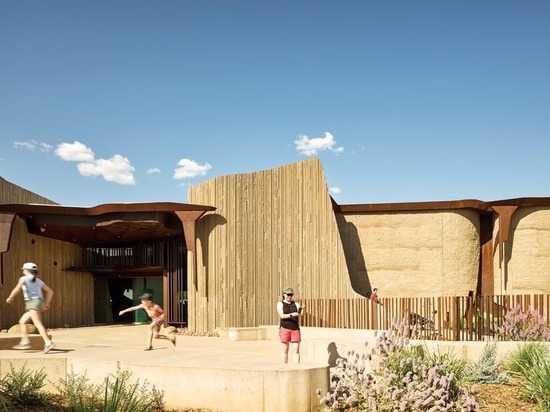 In colour, texture and form, the building appears as a geological monolith that belongs to the outback landscape. 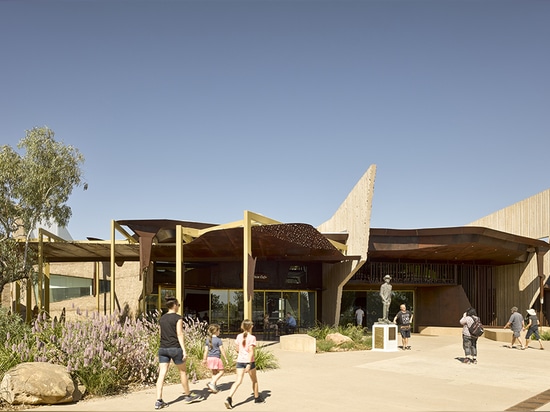 Signage at the main entry evokes the mesa or jumpup, a distinctive rock formation found in and around Winton. 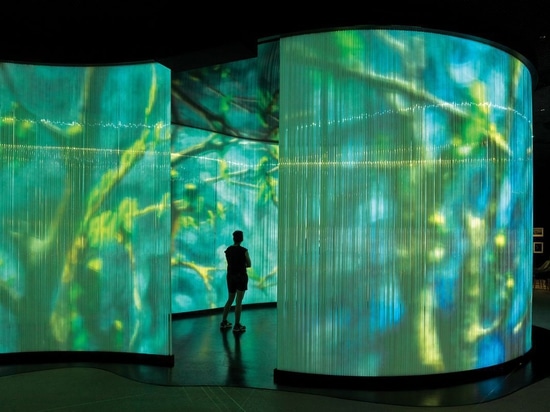