A new facility for a plant breeding and crop research organization builds on the agricultural heritage of Roseworthy, South Australia, yet also offers a contemporary vision of rural enterprise. Ashley Halliday Architecture Interiors has reinterpreted the shed as a vessel for advanced technology, science and innovation.

In South Australia, the name Roseworthy has long been associated with agricultural research. Located forty-six kilometres north of Adelaide with a population of close to one thousand, the town has been home to Roseworthy Agricultural College since

1883. Now a campus of the University of Adelaide, the site continues to advance research and education in agriculture.

This heritage forms the foundation for Australian Grain Technologies (AGT). Established in 2002 as a joint venture linking the South Australian government, the University of Adelaide and the Grains Research and Development Corporation, the company has expanded to become Australia’s largest commercial enterprise dedicated to plant breeding and crop research. AGT-sourced seeds constitute an estimated 50 percent of the Australian wheat crop, while nationally the wheat crop is worth more than $7,300 million to the Australian economy.The focus of the company is the development of new strains of wheat, durum, barley and lupin for improved yields, disease resistance and versatility. A commitment to science, technology and innovation is embedded in the company’s DNA, along with a commercial orientation and a position as a market leader. These attributes have been given architectural form in AGT’s new flagship and headquarters facility: the Southern Crop Breeding Centre in Roseworthy, designed by Ashley Halliday Architecture Interiors, which opened in September 2018.

Director Ashley Halliday describes the project as a “merger between a cellar door, a rural head office and a research laboratory.” The facility comprises 6,600 square metres of administrative, laboratory and infrastructural components, including a dough rheology laboratory, temperature-controlled robotic seed storage carousel towers, cool storage facilities, a workshop, harvester shedding, greenhouses and a controlled-environment research facility. Situated on the edge of the Roseworthy township, the buildings are set within a landscaped curtilage and look out onto demonstration and agronomy field blocks. It is, according to its proud owners, one of the most advanced facilities of its type in the world.The core of its program is gathered into a compact set of conjoined spaces to efficiently link each of the components and give the complex a clear and coherent physical presence. In the laboratory and workshop spaces, planning is rationally organized in rectilinear configurations to optimize workflow and functional segregation. Flexible workspaces and gathering spaces are given high-ceilinged volumes naturally lit by clerestory apertures. A knuckle in the plan establishes a legible entry and central point of focus, providing the hinge between the public-facing elements and the functional bulk of the program.

An external layer of screens and battens softens the rigour of the plan, veiling sunlight while maintaining views, regulating the building profile and producing layered spatial effects. These elements also provide an opportunity to insert subtle narrative content. The northern and western facades are shielded by operable screens of perforated metal, which wrap the main public areas of the building. The lines of square perforations are subtly varied in size and density, in an explicit echo of the striated landscapes of the wheatfields that form the dominant landscape of the region. The device is simple but effective, bringing visual interest, formal coherence and a dash of urbane polish to what could easily have been a huddle of boxy, utilitarian sheds.

The shed, of course, is an essential building typology for agriculture and it has played an important role in Australian architecture. The direct and unaffected vernacular of agricultural sheds set in rural landscapes has provided a potent archetype for many Australian architects, such as the timber and corrugated iron woolsheds that inspired Glenn Murcutt’s early houses. A romantic picture of the bush and of lives lived in close connection to the land underpins this. However, the story of AGT reveals contemporary agriculture as an enterprise that is thoroughly immersed in advanced technology, global markets and a scientific approach to nature. The AGT website boasts that its staff uses “new mechanical solutions, robotics, computer science, GPS, tissue culture, and the latest biological and genetic theory on a daily basis.” If there is a built vernacular that houses such activities, it would likely be closer to the anodyne office parks of Silicon Valley than to the rustic buildings of the Barossa Valley.

This contemporary vision of rural enterprise inspires Halliday. A former principal at Hassell, Halliday established his own practice in 2011 and has been steadily building a profile in South Australia with a portfolio encompassing domestic, educational and commercial projects. Halliday’s architectural language is symbolically dry and geometrically crisp, with a direct expression of materials and a predilection for the laconic clarity of industrial structures. These qualities are evident in his carefully crafted domestic projects for city clients, but it is in his regional and rural projects that they find the most authentic expression. Halliday regards the AGT project, which entered his office within a year of its establishment, as a formative one.

Based in Adelaide, in a state with one of the most highly centralized populations in Australia, Halliday says South Australia’s sparsely populated but economically important regions are underserved by the profession, yet they provide great opportunities for architects willing to look beyond the capital cities.

The resilience and adaptability of rural businesses hold great appeal for Halliday. “These clients are right at the leading edge of strategic thinking,” he enthuses. “They are at the front line of change – market change, organizational change and climate change. They are incredibly savvy and connected. They are aware of regional identity and differentiation, and the need to work harder to attract and retain the best people.” The architect, in Halliday’s telling, is well placed to contribute to this effort.

Halliday’s rural imagination is pragmatic rather than romantic, his aesthetic rational rather than poetic. This makes his precisely calibrated architecture a fitting complement to the contemporary agricultural landscape of Southern Australia. 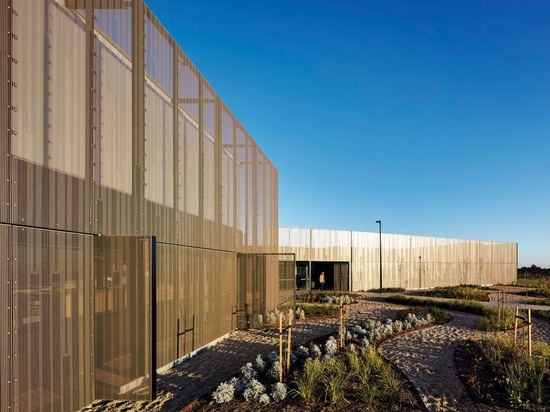 A knuckle in the plan establishes the main entry to the buildings and efficiently connects public-facing elements to the laboratory and workshop components. 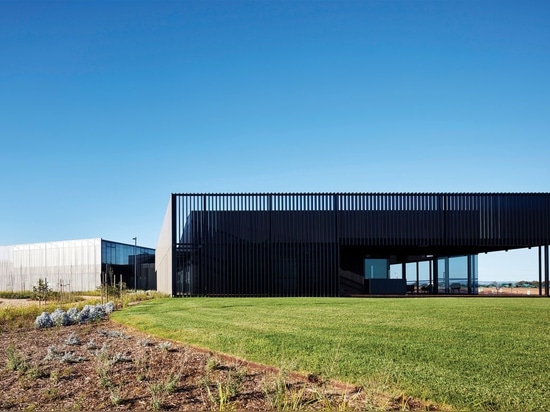 The buildings accommodate a range of functions, from administrative and laboratory areas to infrastructural components.