The aim of the architectural design submitted to the Mosque Design Ideas Competition opened by the Ministry of Environment & Urbanism has been providing a “particular” solution to the place and functions chosen, rather than introducing an “original” form for mosque buildings.

The location of the unspecified plot was assumed to be in a newly developing suburb of Mardin, a historic town in Southeastern Anatolia, and additional facilities that will turn the mosque into a public gathering place in such a setting were sought at the beginning of the design phase.

In response to the relatively low education and income levels, housing shortages worsening with internal and external migration, as well as the lack of social spaces in the peripheries of cities in Southeastern Anatolia, functions to be solved in the project were determined as the following titles: Praying (mosque and related spaces such as, ablution area, imam’s residence, etc.), education (Quran course, library, classrooms and studio), solidarity (dining hall and house of refuge) and socializing (cafeteria and exhibition hall).

Complying with the tradition of not praying past the mihrab (Mecca facing wall) line, the mosque was pushed toward the south of the site and the open space for communal praying was maximized.

In the section plane the mosque mass was buried into the topography by taking advantage of the slope between the north and south ends of the site. The courtyard in front was sunken to the level of the street on north so that the easiest pedestrian access was given from the busiest direction of neighboring commercial and residential blocks.

Spaces with functions other than praying were solved around the central courtyard so that they can benefit from the open space as well.

Entrances to the courtyard were planned from all corners of the site, in order to turn the courtyard of the mosque into a circulation hub connecting the surrounding streets with shortcuts, as in traditional architecture. Accordingly, functions were solved in separate buildings and shadowed walkways with steps referring to the vernacular urbanism of Southeastern Anatolia were opened in-between to access the courtyard. Platforms with differing levels were created within the courtyard, in order to divide enclosed praying area, open praying area and circulation areas. Those were interconnected with ramps to ensure unobstructed access for the disabled.

During the 3d design of the masses clues from the arid geography of Southeastern Anatolia were sought and “cracked earth” was one of the very first images that came to mind. Earth is cited in Quran as one of the materials from which man was created. It is again earth where the bodies of Muslims are buried after death, which gives it further symbolic importance in Islam. Accordingly, the significance of earth was referred to in the design with the burial of the mosque into the slope. Similarly, water is also emphasized in Quran as “source of all life”. In light of these, the image of “a plant sprouting from cracked earth touched by water” has become a determining source of inspiration. Building masses divided by walkways leading to the courtyard were imagined as surfaces of earth separating with cracks; accordingly a mass composition imitating topography was aimed.

In line with this central idea, the level of the courtyard was sunken by 1m, in order to minimize the height of the buildings and this level was accepted as ±0,00. Roofs angled according to the slopes of streets around were designed as tectonic surfaces that merge with the sidewalks by bending down toward site boundaries. All roof and courtyard surfaces were clad with yellow limestone commonly used in the vernacular architecture, in order to express the emergence of the masses from the ground.

To achieve the effect of “cracked earth”, it was decided that the stone surfaces will be fragmented with evident seams. Consequently, geometric ornaments of traditional Islamic arts were reinterpreted and a triangular pattern that also fits the shape of the plot was developed. This pattern was not only applied to stone surfaces, but also played a major role in determining the contours of the buildings.

Inspired by the introvert traditional architecture of the region that turns its back to the street, a “façadeless” architecture was achieved where only the opaque roof surfaces and the minaret can be perceived from the outside and the transparent glass façades face the courtyard.

Referring to the traditional architecture, only wood joinery and cladding were used besides natural stone on the façades and vertical and horizontal surfaces were distinguished with the contrast between stone and wood. Wood cladding was also continued on the ceilings of interiors.

The minaret was designed in the form of a pyramid in line with the overall mass design concept of the project. It was positioned in the center of the courtyard as an independent reference point ascending to the sky. Referring to the meaning of the word “minaret” as “place of light”, it was also designed as a source of light illuminating the courtyard. The pool underneath refers to the symbolic importance of water, as well as its cooling function in the traditional architecture of Southeastern Anatolia.

Private patios were designed within classrooms, cafeteria/exhibition and house of refuge buildings, in order to get sunlight from the street direction, as well as to provide private open spaces for its users. Trees that will provide shadow during summer were planted in both the main central courtyard and the smaller patios facing the streets. It is foreseen that those will grow above the roofs and recreate the image of “the plant sprouting from earth”, which inspired the design.

The prevailing wind direction is from north-northeast in Mardin, where site is located. Accordingly, the façade of the mosque was designed as oblique surfaces opening up to north-northeast, so that fresh air is allowed inside through the operable windows in the glass façade. Natural ventilation is enabled by exhausting the warm air through the automatically operable skylight above the mihrab wall.

A floor heating system supported by a ground source heat pump was proposed for the mosque. It is foreseen that the mosque interior will be mostly sheltered from sunlight and hence will need minimal artificial cooling thanks to three of its façades being opaque with only the northern one being transparent, whereas the roof being covered with earth and plants.

Rainwater falling on the neighboring park and the mosque roof will be collected in the two-storey high, 200m³ volume water tank and will be used for landscape irrigating, as well as in the urinals and toilets. Moreover, water saving sanitary equipment will be used in all toilets and kitchens and water consumption will be further minimized with grey water reuse systems.

Natural lighting will be maximized with transparent façades, whereas glare and overheating will be prevented with wood sunbreakers in front of glass surfaces. Artificial lighting costs will be decreased with LED based fixtures and movement sensors. 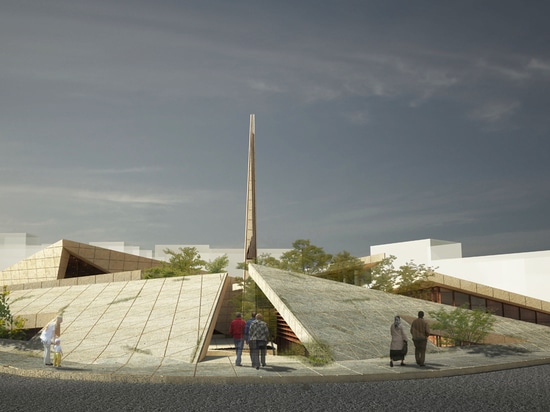 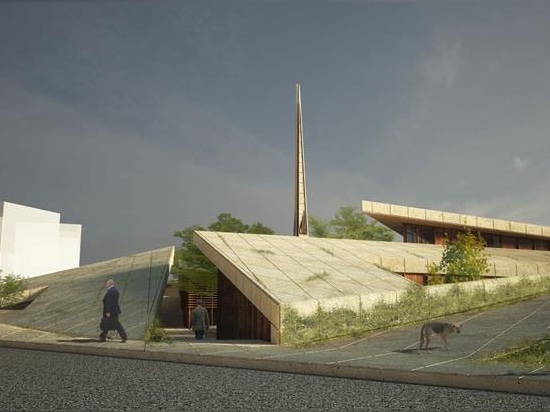 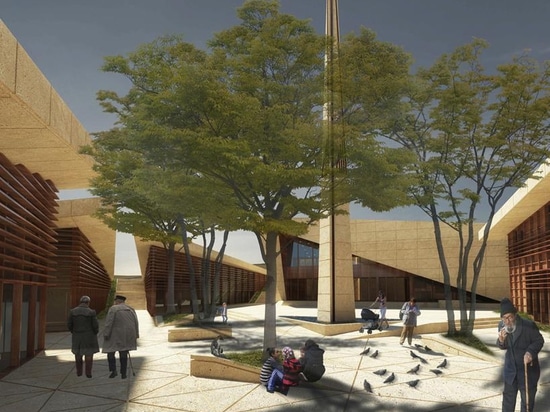 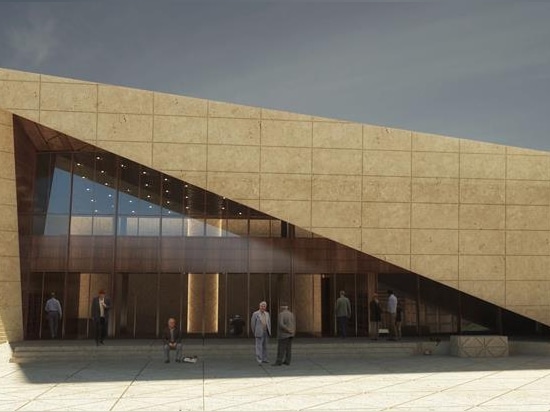 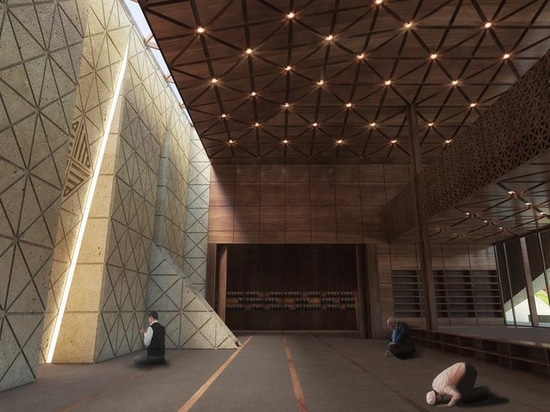 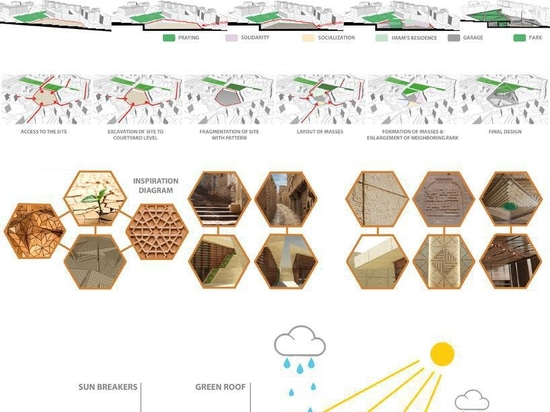 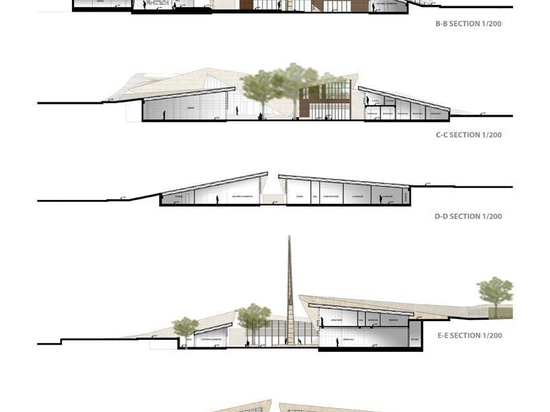