Chinese firm Atelier FCJZ has completed an art gallery that bridges a river in the city of Jishou, to encourage people to engage with art on their daily commute.

The Jishou Art Museum (JAM) traverses the Wanrong river, which runs through the old town of Jishou, China.

The museum provides a pedestrian route that connects parts of the existing urban fabric and references the region's traditional covered bridges.

Initially, the municipal government had planned to build a new art museum in a development zone on the outskirts of the city, but Atelier FCJZ proposed situating it more centrally to make it more easily accessible."The river runs through the middle of Jishou, which makes the most central location for the art museum over the water course," said Atelier FCJZ,

"The art museum then naturally doubles as a pedestrian bridge," they added. "We hope that people in Jishou would not only make a special trip to see art but will also encounter art on their way to work, to school, or to shop."The building comprises two stacked bridges that perform different but complementary functions. The lower level is an open steel truss structure that resembles a covered street.

This bridge features a sloping floor that arcs over the river and incorporates stepped podiums where passers by can stop and rest. An open metal balustrade lining the walkway permits views of the river on either side.

The museum's painting gallery is accommodated in a concrete arch placed on top of the steel truss. The concrete volume was cast in-situ and also features a floor that arcs gently along its length.

In between the two bridges, glazed walls shaded by vertical ribs covered in tiles enclose a hall for temporary exhibitions. This brightly day-lit space also contains staircases connected to the sides of the painting gallery.Supplementary spaces including the entrance hall, offices, shop and tearoom are located in the two bridgeheads at either end.

Visitors can enter the upper level from either side of the river and pass through the exhibition hall on their way across.JAM's goal is to embed culture within the community and to merge with existing terraces housing shops, restaurants and residences. Entrances on both riverbanks are therefore integrated into the mixed-use streetscape.

Its design references traditional covered bridges found throughout the mountainous Xiangxi district in western Hunan. These bridges, known as Fengyu Qiao, typically provided a public space where travellers would rest and vendors would set up stands.

"Our design creates a contemporary interpretation of the age-honoured building type," the architecture studio said.

"We introduced art as a new programme on a covered bridge while maintaining pedestrian traffic and meanwhile translating the formal language of the Fengyu Qiao into a modern one."Atelier FCJZ was established by Yung Ho Chang and Lijia Lu in 1993.

The Beijing-based firm's previous projects include a windowless house with glass floors and a restaurant featuring a ceiling made from a woven net of bamboo. 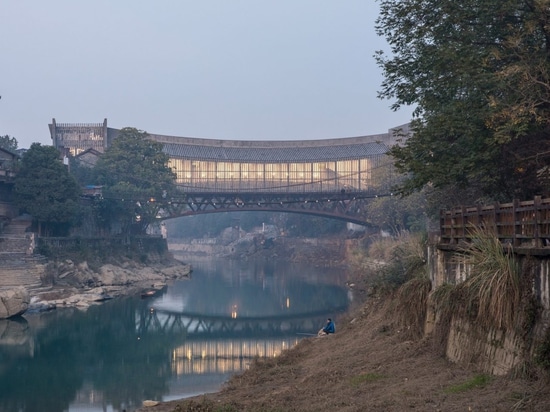 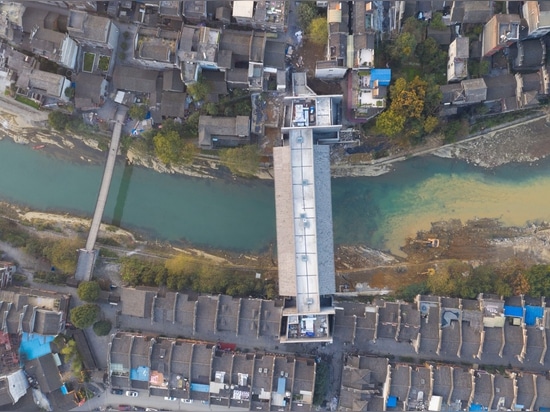 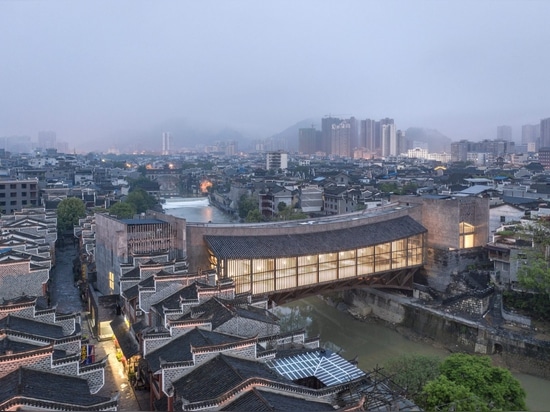 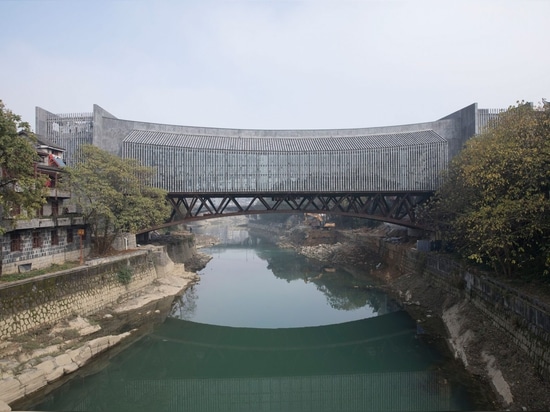