The smart city is the king of go-to solutions for the problems that bedevil urban areas.

At the moment, the concept—tech innovates those problems away!—is trending hard in Toronto thanks to the work of Sidewalk Labs, the Alphabet-owned company that dove face first into urban design a few years ago with a plan for a lakefront district in Ontario’s capital. Now, that plan is a completed master plan, the foreground to any large development. The public got its first look at Sidewalk Labs’ new neighborhoods yesterday when the company released a full run through of their finalized plans. Unlike New York’s super-sleek Hudson Yards, a comparable “big development,” there will be a forest’s worth of wood buildings in this project.

The digital doorstopper runs 1,500 pages and is available here, but the basic premise is two new mega-developments, with the potential for more, will be built mostly from mass timber and kitted out with sensors and data collectors that will, its authors contend, make life more pleasant for Torontonians by providing affordable housing, non-car transit options, jobs, and economic development. The company will, for a substantial investment and cut of the profits, develop real estate, finance transit networks, provide management services to government, and deliver what it calls “advanced systems,” the whiz-bang infrastructure that supports the building of Quayside and Villiers West.

The computerized promise of better services has garnered a lot of attention. Trash-sweeping robots would displace nifty nabber trash grabbers. Sensors embedded in crosswalks could, for example, keep the walk sign on until a pedestrian is safely on the opposite curve. Google’s business model relies on pawning off data advertisers, but in a media briefing, Sidewalk Labs CEO Dan Doctoroff claimed that the very valuable data Sidewalk Labs collects will be underpinned by the “strongest data and privacy regime for any urban data in the world.” That protection was certainly absent for Google Nest Cam users, and government officials still have concerns over whether the company’s policies will align with Canadian data security laws. Data gleaned in Toronto, Doctoroff noted, will be stored in a data bank and won’t be shared with third parties without users’ “explicit consent.”

While it’s too soon to tell how that promise shakes out, there’s plenty of information on the smart city’s design and construction. Unlike 20th-century glass-and-steel corporate modernism that projected power and influence, Sidewalk Labs is turning to mass timber for 12 major buildings in the Quayside portion of the development. The showcase here is both structures by London’s Heatherwick Studios, the eminent go-to firm for megadevelopers, and an $80 million vertical timber supply chain for those buildings that will extend from forests to an Ontario factory to fashionable city blocks. Doctoroff said his company is working with the Toronto buildings department to amend rules that cap timber building heights at six stories in order to build up to 30 stories tall.

The developments will feature a standard of mixed-use towers, but about 70 percent of the project will be devoted to housing. Of these units, about 40 percent, or 1,700 units, will be rented below-market.

“We expect to make money the way a normal real estate company would,” said Doctoroff. Sidewalk Labs is investing over $680 million in what is projected to be a $2.9 billion development.

The credits list New York’s Beyer Blinder Belle (BBB) and Heatherwick Studio as the teams responsible for the master plan sketches and renderings, but Doctoroff said Canadian firms would be behind most of the projects to come. Along with Stantec, BBB gets top billing for design and engineering services, while Snøhetta who were tapped for design services back in February, is credited alongside Heatherwick and dozens of other firms for research and development. 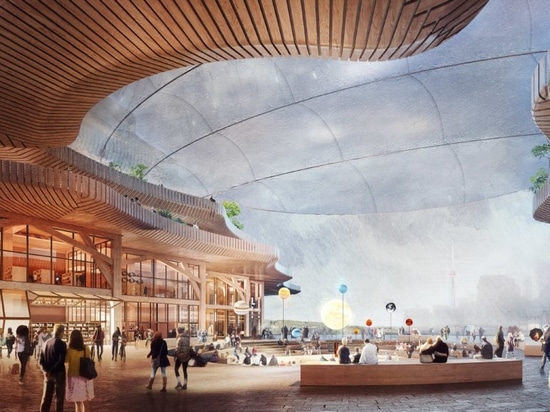 A rendering of the Innovation Campus, a business district inside the proposed Toronto development. (Courtesy Sidewalk Labs) 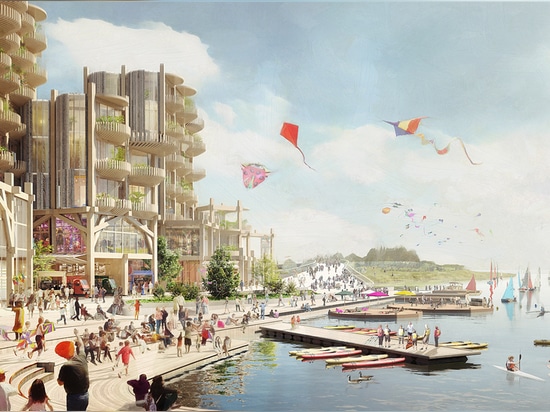 Quayside’s location on the waterfront was made an integral part of the planning, and Sidewalk Labs expects the neighborhood to use it for leisure. (Courtesy Sidewalk Labs)