The Retreat at Blue Lagoon Iceland

To integrate landscape convincingly into architecture is a true challenge and plays a pivotal role in regions with breathtaking nature scenes as can be found in Iceland. Located at the Blue Lagoon in Iceland, The Retreat has been built directly into an 800-year-old lava flow. The overall concept encompasses a subterranean spa, a geothermal lagoon, a restaurant that reimagines Iceland’s culinary traditions, as well as a luxury hotel with 62 suites. Encircled by the Blue Lagoon’s mineral-rich waters, the architecture and design of the hotel harmonise with the otherworldly volcanic surroundings, erasing the boundary between man and nature. The result is a one-of-a-kind destination where the interplay of lava, moss and water is woven into every facet of the guests’ journey. Inspired by the landscape, the interiors feature refined tone-to-tone colour schemes and simple shapes. With all elements converging into unity, the design conveys an atmosphere of restrained luxury. The chromatically defined colour palette has been meticulously chosen to highlight and echo the volcanic vista, conjuring harmony with the water, land, weather and light. The resulting style is truly timeless and a sophisticated incarnation of a self-reliant notion of luxury that is both distinctively Icelandic in that it is rooted in the tradition of Scandinavian design, but at the same time is also infused with Italian craftsmanship and attention to detail.

Transforming the spectacular natural lava flow scenery, The Retreat at Blue Lagoon in Iceland has emerged as a wonderful place for relaxation. Its charm resides in its natural simplicity. Establishing a sensual balance, the interior architectural forms have been designed to interact with the elements of the surrounding landscape – creating an atmosphere of noble refinement that is further enhanced by a skilfully implemented colour composition and a clever lighting concept. 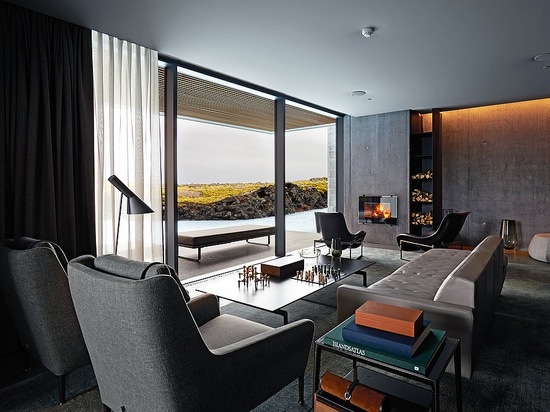