A covered street cuts through this new university campus building in northern Brazil designed by Rede Arquitetos, Croquis Projetos and Neudson Braga, providing a shaded and breezy area for students to socialise between classes.

The building expands the Universidade Federal do Ceará's (UFC) campus in the Brazilian town of Crateús with classrooms, laboratories, offices and flexible spaces. It is the second structure built on the new campus, and is part of a larger development scheme for the UFC.

Three architecture studios collaborated on the design. The team was made up of architect Neudson Braga, with firms Rede Arquitectos and Custodio Santos Arquitetura, formerly known as Croquis Projectos.

Many aspects of the design were driven by the region's arid climate. The team employed several strategies to help keep the building cool, including using white concrete for the exterior, large pivoting brise-soleils on the facade, and screening certain areas with patterned concrete blocks to improve air flow.

The central spine that cuts through the building helps students, faculty, and staff move about without needing to go outside. The column-free space was achieved by having light steel trusses span between each half of the building.

"The structure of the wings is of reinforced concrete and of steel in the covering of the central void and the module of coexistence, without pillars interrupting the internal route," the team said in a project description.Conceptually, the architects connected two "educational volumes" with a gathering area between them. The two blocks form a dog-leg shape comprising blocks of classroom organised along two sets of parallel corridors that intersect at the irregular angle.

The meeting point of these volumes is a double-height space, Student amenities like a cafeteria and print shop are located here, alongside a covered gathering space. According to the design team, this area "turns to the outside of the building, with a programme without defined uses".Open staircases lead to the upper level, where circulation mezzanines and bridges provide access to more classrooms and offices.

Classrooms and other programme spaces that run are set back from the edge of the building to avoid glare and overheating in the interiors. Double-height concrete shades set at different angles form the facade and hide the building's mechanical equipment.

In the areas that do have windows directly to the outdoors, the architects limited the size of the openings, creating small punched apertures rather than using large expanses of glass.

White concrete, the building's primary material, is left exposed in most spaces. Simple and functional furnishings are provided throughout the building, alongside planters and small gardens that provide vegetation even indoors.Other recently completed educational facilities include a new campus in the city of Aguascalientes that provides students with flexible spaces within a lush courtyard within the building. Architect Daniel Delgoffe has also completed a new building for a circus school in Belgium, slotting spaces for acrobatic practice within a repurposed boiler house. 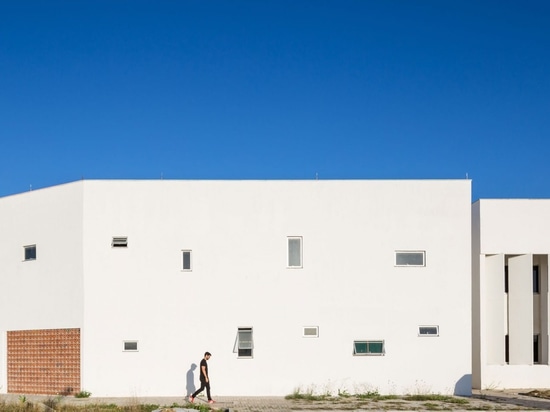 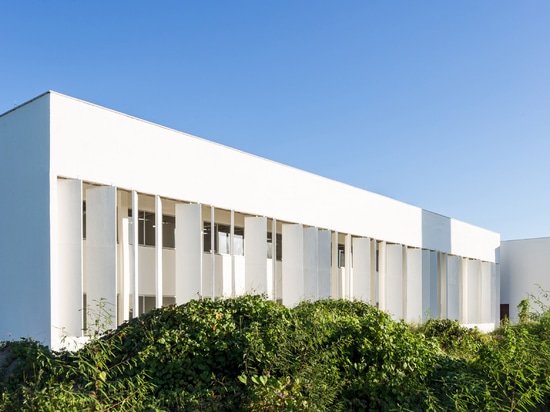 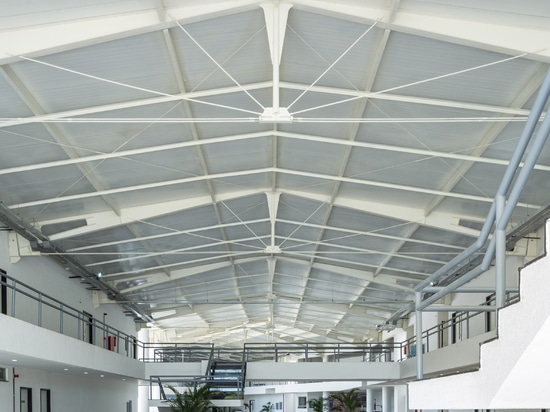 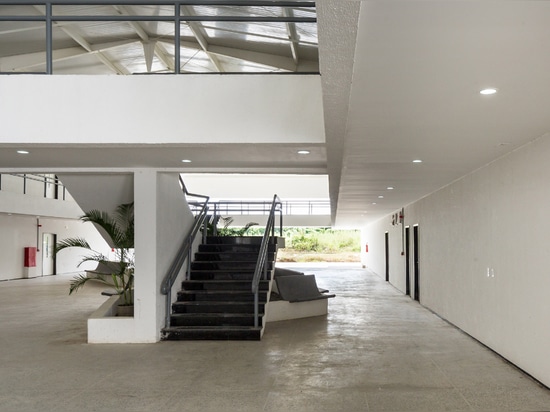 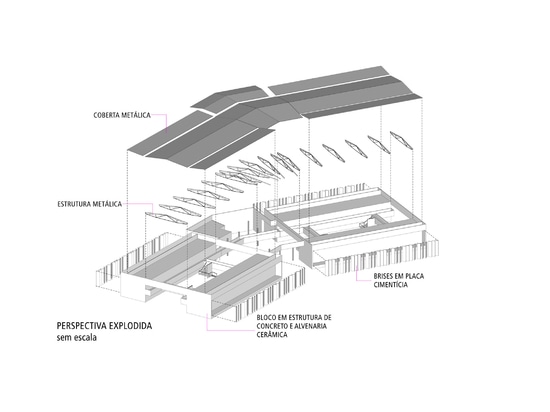