Australian chef Adam Wright-Smith has turned an old mill in Melbourne into a restaurant spread across a set of formerly industrial buildings with a central kitchen at its heart.

Half Acre is designed by the local chef, who took on the industrial plot in the south of the Australian city for the restaurant project.

The site comprises a new brick building with a glass-pitched extension and an adaptively reused one, which together form a sprawling property."When you walk through the front door, you don't really know what to expect," Wright-Smith told Dezeen. "It is a destination. It's not particularly close to anything."

"There's a sense of adventure here, so I played on that with the design," he continued.

To enter the restaurant, guests first pass by an open kitchen anchored by a wooden built-in table.

The exposed design and the central placement of the kitchen introduce the sense of adventure that unfolds across Half Acre, as guests meander to different spaces on-site.

Wright-Smith transformed the run-down original mill building into a private dining-room, and added the glass-pitched volume next to it.Arched windows and entry doors on the new brick building add more space. Also on-site is an empty building that previously housed machinery relating to the mill, whilst car repair workshops surround the eatery.

The unusual site posed many challenges as well as inspiration points for Wright-Smith.

Existing Oregon pine ceilings and brick walls from the 1900s in the former mill provided the jumping-off point, resulting in an intimate and rustic experience.

Sliding glass walls open up the main dining area to additional zones, including a patio with a fireplace and an indoor-outdoor bar with a roof that can be taken off in summer.Decorating the main dining room are cane-backed, bentwood and woven rattan dining chairs. Marble and wood tables and built-in booths with taupe upholstery complete the space.

Various plantings complement the touches of soft green interspersed throughout.Light grey tiles cover the majority of Half Acre, in addition to concrete in the same tone, giving a sense of cohesion to the spaces. Wood floors and white-washed brick walls add a rustic yet cosy aesthetic.

Custom floor and wall lamps in white are designed by Studio Pasquale, including oversized brass wall sconces. Other sconces are by Australian designers Anna Charlesworth and Henry Wilson.Before opening Half Acre, Wright-Smith spent his time working at Fat Radish in New York led by Ben Towill, who has also left the city and opened a restaurant in Charleston, South Carolina.

Half Acre shares many similarities with Noma in Copenhagen by BIG, which is also situated on a former industrial plot and based on a grouping of different buildings.

Further comparisons can be drawn between their colour palette, brickwork and glass, and the use of a central and open kitchen.The Melbourne eatery is joined by a group of other projects in the city, including a stark white bridal boutique by Adam Kane Architects, a sculpture garden at the National Gallery of Victoria, and a pink-and-concrete Hunter & Co deli.

Other residential projects here are a glass-fronted house by Matt Gibson, a renovated bungalow inspired by Japan and townhouses that channel art deco architecture. 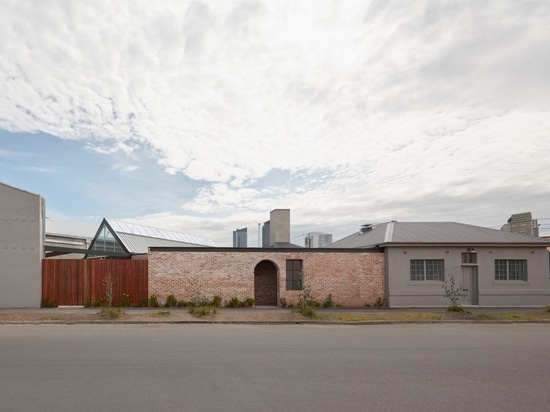 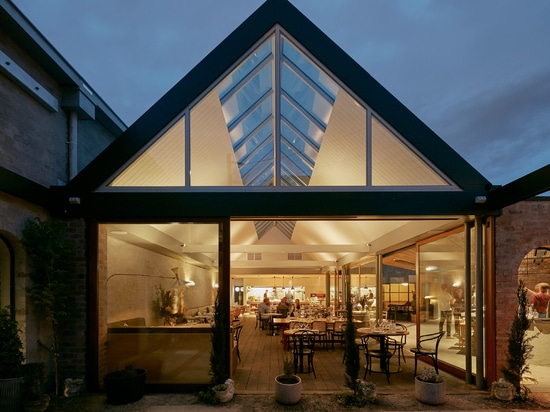 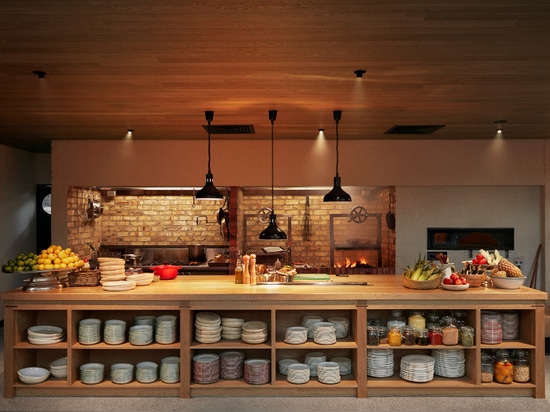