Pool Leber Architekten has used cross-laminated timber to add a bright and spacious new loft to a 1980s housing block in Munich.

The project, called R11, was not as straightforward as it looks. The four-storey, concrete-framed building was not previously strong enough to take on the load of an extra floor, as a result of weak foundations.

Pool Leber got around this with a design that involved removing the old upper floor, including its reinforced concrete structure, and replacing it with two new storeys that are significantly lighter in weight.

The new structure is made from cross-laminated timber – an engineered wood that can offer just as much strength as steel or concrete.

The two new storeys are designed to be flexible. Right now they are divided up into three homes – one standard two bedroom residence, and a pair of adjoining apartments that both have access to a more characterful loft space on the level above.

It would also be possible to split the two adjoining flats into separate units. Equally, it would be easy to transform the upper level into another home, bringing the total number of units up to four.

The loft level is topped by a mezzanine gallery that takes advantage of the steeply sloping roof.

"The interior space is designed as a flowing sculpture, binding all functions together in a series of interlocking interior and exterior spaces," explained the firm, which is led by architects Martin Pool and Isabella Leber.

"The apparent dynamic and organic form belies a rational grid laid over the load-bearing walls of the building below."Externally, the new timber structure is concealed behind a cladding of steel panels that match the tone of the rendered walls below. But internally wood is a prominent feature, covering walls, ceilings and floors.

Wood is also used to create sculptural joinery details, particularly on the upper level. For instance, a series of storage cabinets double as window seating, but also slope up around a corner to become a sideboard.

A staircase is made out of angular, cantilevered treads, while the kitchen island also features unusual angles.

The warm tones of the wood are contrasted by walls of exposed concrete and industrial-style steel balustrades and frames."The flowing character that distinguishes the whole design is also featured in the choice of materials, which provide a gentle colour gradation in a natural palette from the light brown of wood to the greys of the steel and concrete," said the architects.

Balconies feature on both storeys, but they don't match the alignment of the levels below.

They have a free-flowing aesthetic that is more in keeping with the design of the new interiors, and also fit around a series of bay windows.Skylights were also added, to ensure plenty of daylight is able to penetrate the building. 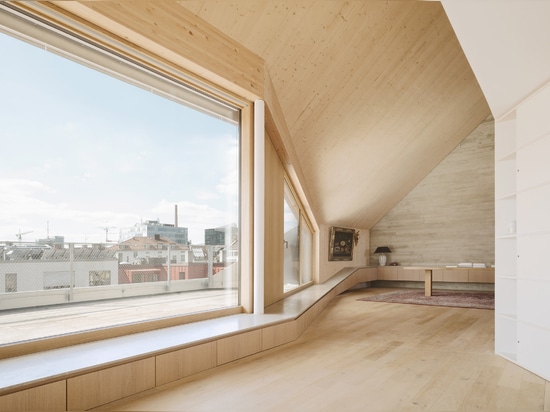 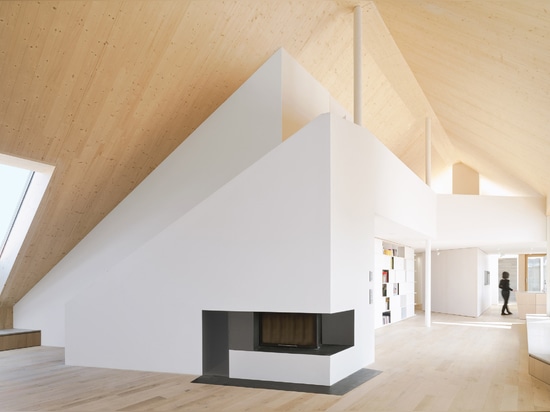