BIG has arranged the classrooms of this white-brick and glass school in Arlington, Virginia in a fan-shape to allow for a "cascading terraces".

Bjarke Ingels Group (BIG) designed The Heights public school on a tight plot in the Virginia city just outside of Washington DC, which is surrounded by three roads and the edge of the city's Rosslyn Highlands Park.

"The density of the urban Arlington neighbourhood became the inspiration for the school – we fanned the classrooms to allow each and every floor to be connected to the roof garden on top of the classrooms below," said BIG founder Bjarke Ingels.

Five classroom volumes are stacked and pivoted on top of a larger base level, and detailed to look as if they overlap one another.

A swooping staircase alternates between inside and outside to provide access to each of the floors and the rooftop gardens above.

"The resultant cascading terraces are connected by a curving stair that weaves through all levels – inside as well as outside – making all students, from both programmes and all ages, visually and physically connected to each other," Ingels added.

"Each terrace is landscaped to lend itself not just to the social life of the students but also as informal outdoor spaces for learning."

Glazed white bricks clad the exterior of the 180,000-square-foot (16,700-square-metre) building. Large expanses of glazing are placed on the inner side of the fan to offer views to the surroundings.

BIG worked with executive architect Leo A Daly, Arlington Public Schools (APS), West Rosslyn Area Plan and the local community on The Heights, which was first unveiled in 2016.

The projects was initiated to combine two existing school systems in Arlington: H-B Woodlawn school for grades six to 12, and the Eunice Kennedy Shriver Program that offers special education for students ages 11 to 22.

The two lower floors are intended for the latter and include an occupational physical therapy room and a space to aid sensory processing.In total, The Heights spans 180,000 square feet (16,700 square metres) and accommodates over 775 students. A sports field is set on one side and enclosed with a fence, and an existing convenience store is at another corner.

To complement the recreational field, BIG also created two sunken courtyards, an entry garden and a new public park on the corner of Wilson and Quinn Street. The first roof terrace is also accessible to the pubic when school is not in session.

As a contrast to the white brick exterior, each classroom level inside the building is decorated with a unique colour, including blue, purple, pink, yellow and orange. There is also an indoor basketball court that has green walls.

A large amount of glazing inside echoes the windows on the exterior and creates views to other spaces inside the building.

"Glass walls open up views between the different activities, making it a three-dimensional composition of all aspects of learning and living in the school," said Ingels.Rounding out The Heights are zones located underneath the classroom levels. These include a triple-height lobby, gymnasium and a 400-seat auditorium. These more public areas are placed near the school's busy frontage of Quinn and Wilson streets.

In between these spaces, and the classrooms above, are the library, cafeteria and music rooms."Underneath the canopy of fanning classrooms, a giant cave holds spaces for all the communal spaces – the theatre, the sports hall, library and canteen – creating a multitude of spaces where students can linger for fun or for study – on their own or in groups," Ingels added.

In addition to this school, BIG has completed several other educational buildings in the US. Examples include a Massachusetts university building with "domino effect" copper walls and a New York City school that forms part of The We Company, which also runs co-working group We Work. 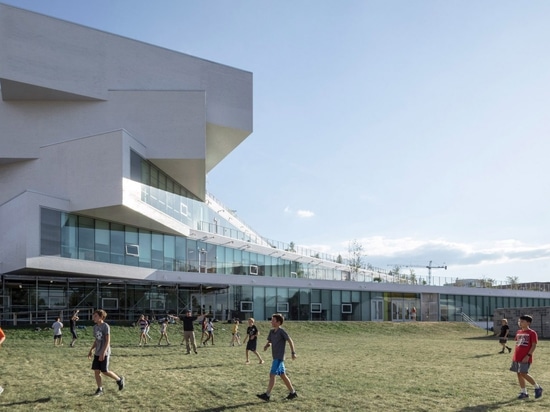 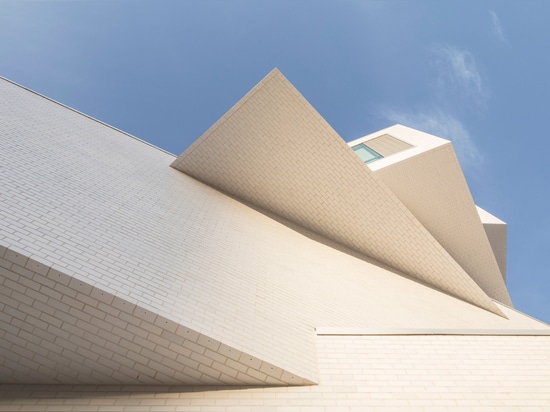 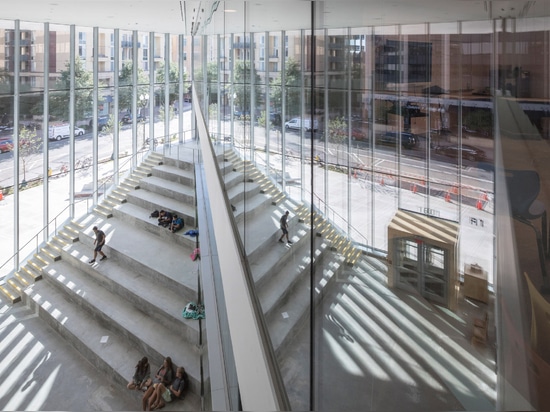 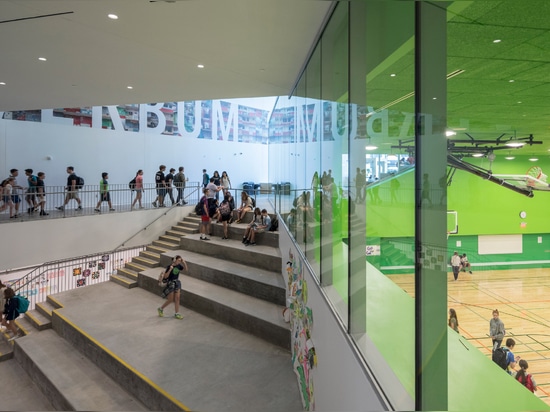 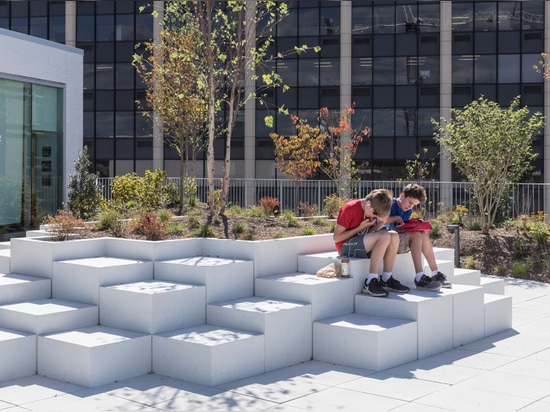