Japanese studio FORM/Kouichi Kimura Architects are known for their minimalist houses characterised by a sculptural rigor and cubist elegance, and while their latest project Slender House in Japan’s Shiga prefecture is no different, it’s also a testament to the studio’s ingenuity in tackling demanding briefs.

As its name suggests, the architects had to contend with a very narrow and deep lot, located within a densely built suburban area. In response, Kimura’s minimalist design strikes a balance between functionality, spaciousness, natural light and privacy to create a modern home for a family of three that feels neither contained nor constrained by its slender proportions.

The slimness of the new building is a response to both the property’s elongated shape and the need to establish a breathing distance from its neighbours. Tapered at the front to allow for parking spots on either side of the concrete porch, the austere composition of three rectilinear volumes is complemented by distinct textures and colours that enhance its sculptural sensibility and symmetrical design as well as soften its bulky mass. The solid exterior is also punctured by a tall street-facing window that accentuates the building’s slender proportions and which lights up to become a beacon of homely warmth come night time.

The exterior’s subdued colour palette continues inside where it joins a minimalist décor of built-in furniture, trimless fittings and uncluttered surfaces to establish a sense of spaciousness despite the limited floor area. Exposed concrete, white plaster and grey floorboards are complemented by warm timber veneers and earthy floor tiles, while slim black trimmings add a graphic finesse.

The ground floor is conceived as a communal hallway that stretches along the entire depth of the building, from the entrance vestibule at the front, to the powder room in the back. Slight changes in floor level and a series of built-in storage units break down the narrow space in distinct zones without diminishing its openness, while frosted glazing in the powder room and entrance hall enable natural light to penetrate whilst also securing privacy. A wide opening linked to the child’s bedroom funnels additional daylight into the darker stretches in the middle of the narrow space, and further strengthens the spatial cohesion of the ground floor.

Upstairs, the sitting, dining and kitchen areas form an open-plan living space which also extends into the master bedroom once a wide sliding door is retracted. Nestled in the narrowest part of the floorplan, the sitting room is dominated by an imposingly tall window, whose verticality echoes its elongated proportions and accentuates the soaring ceiling height. Featuring a translucent panel at the bottom that shields the space from prying eyes from the road below, the window frames beautiful views of the mountains in the distance as well as provides generous amounts of natural light to enter the entire open-plan living area. The brightness of the open-plan living space is also enhanced by the white colour of the walls and ceiling, and the reflective finish of the timber wainscoting, as well as the addition of a small skylight in the dining area. All in all, it’s thoughtful details such as these that make this project stand out in its uncompromising insistence for both comfort and elegance. 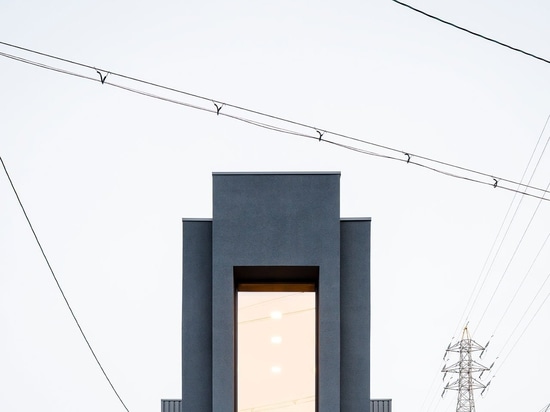 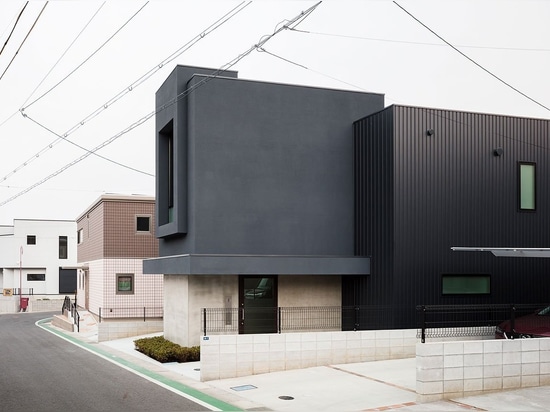 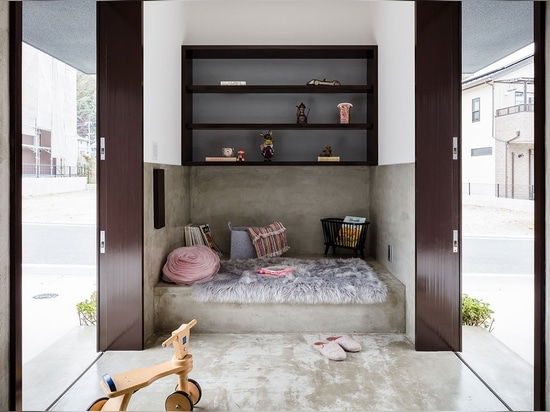 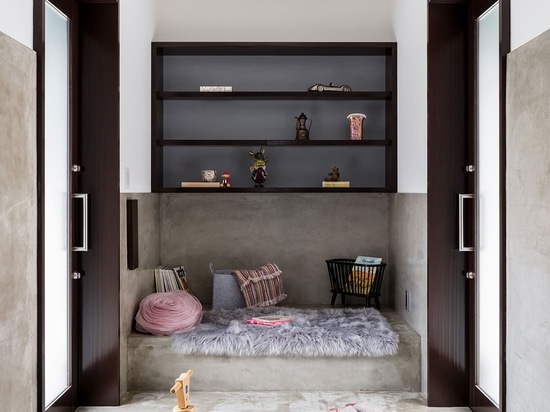