Seattle‘s tightly packed Pike Place Market district is abuzz with tourists seeking all things unique to the culture of the Pacific Northwest.

One such destination is the Seattle Aquarium, a nonprofit and marine research center along its Western shore that has been delighting over 800,000 visitors a year since 1977. In 2015, the city council supported an ordinance to contribute $34 million to add a significant addition to the aquarium in the form of an “Ocean Pavilion” dedicated primarily to the exhibition of sharks and stingrays native to the South Pacific. On December 9 of this year, that ordinance passed unanimously. Local firm LMN Architects was recently hired by the aquarium to design a 50,000-square-foot Ocean Pavilion that would effectively replace a portion of the Alaskan Way Viaduct abutting the site between Pike Place Market and Piers 59 and 60.

“The Ocean Pavilion will be at the crossroads of the city,” said Seattle Aquarium president and chief executive officer Bob Davidson. “It’s a gift, and it’s also a statement of the importance of Seattle’s relationship to the water and the ocean.”

A 325,000-gallon tank teeming with marine life will act as a centerpiece for the new pavilion, while surrounding spaces will feature exhibitions showcasing the ecosystems found in Indonesia’s Coral Triangle and the general Indo-Pacific region designed to educate visitors of the human-related threats facing ocean life.

“Guided by Seattle Aquarium’s mission to inspire conservation of the marine environment,” said LMN Architects, “the new facility establishes the context for an ocean ethic, focusing on global stories like climate change and ocean acidification.” Adjacent to these exhibition spaces will be an open gathering and viewing space facing Elliott Bay that will accommodate flexible programming for up to 200 people at a time. From the outside, pedestrians will be afforded the opportunity to look through an overhead oculus the firm has dubbed “the Sharkulus,” which will offer views into the main exhibit from both the rooftop terrace and the plaza level.

The entire project is anticipated to cost $113 million and is scheduled for completion in 2023. 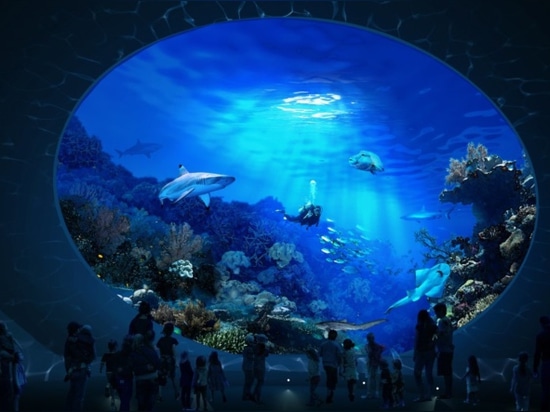 A “Sharkulus” will allow visitors to gaze into a 325,000-gallon tank teeming with marine life.