Between Dorte Mandrup, Diller Scofidio + Renfro, and WEISS/MANFREDI, it was anyone’s guess who would win the commission between the three firms to redesign the 13-acre site of La Brea Tar Pits back in August.

It was revealed by Dr. Lori Bettison-Varga, president and director of the Natural History Museums of Los Angeles County (NHMLAC), on December 11 that WEISS/MANFREDI has been selected to lead the master planning team. “We are excited to move forward with Marion [Weiss], Michael [Manfredi], and their remarkable team,” said Bettison-Varga in a press release, “as we work toward a more integrated experience of the museum and the landscape in Hancock Park while increasing community access, preserving the site’s iconic features and developing a more sustainable infrastructure for the next 50 years.”

Prior to selecting a winner, NHMLAC invited public feedback by displaying text and imagery of the three proposals in the George C. Page Museum, a museum built on the site in 1977 to exhibit the fossils discovered underneath the grounds. Though it was reportedly difficult for the selection team to choose between the three firms after reviewing over 2,100 survey responses, WEISS/MANFREDI’s proposal stood out for its ability to “capture the imaginations of a broad cross-section of audiences,” according to Bettison-Varga.

Their master plan, titled “La Brea Loops and Lenses,” proposes the inclusion of a 3,281-foot-long pedestrian walkway framing Lake Pitt, a tar pit featuring a dramatic depiction of Ice Age-mammoths slipping into its murky depths, as well as several of the site’s other impressive natural features. In a press release, WEISS/MANFREDI explained that “The intertwining loops link all the existing site components, enhancing spaces for community and scientific research. The lenses, as framed views throughout the park and museum, reveal the La Brea collection to visitors, bringing the museum to the park, and the park into the public imagination.” In addition, the original museum building will stay on the site and its floor space will be significantly increased by a partially-underground gallery space and an adjacent wing facing Sixth Street to the North. Christopher Hawthorne, Chief Design Officer for the City of Los Angeles and jury member for the selection committee, expressed that “WEISS/MANFREDI and its collaborators stood out with a concept for the site that is both full of fresh thinking and thoughtfully responsive to [the site’s] layered existing conditions.”

Over the next few years, NHMLAC and WEISS/MANFREDI will collaborate on public engagement, master planning, design and construction of the redevelopment of the site. 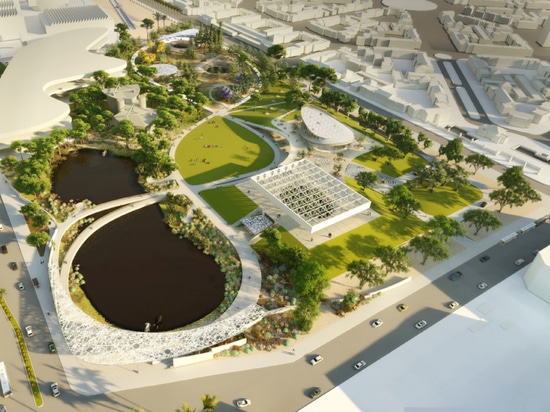