The trend of converting disused churches into private residences has been exhausted but little has been done by way of turning these former “sacred space” into civic or commercial venues.

Leading the charge in this new adaptive reuse application is Balbek Bureau. The Kyiv-based interior architecture firm recently completed 906 World Cultural Center, a multifunctional startup incubator, events space, and co-living concept that occupies a former church in the heart of San Francisco. The complex serves as a launchpad for the development of young companies, enabling them to live, work, socialize, develop, and communicate with like-minded entrepreneurs in a single space.

The core of this late nineteenth-century, Mission Revival bethel was re-equipped as an auditorium while its basement was refurbished as a workspace and lab. Salvaging and restoring the historic features of the listed Our Lady of Guadalupe church, the firm implemented a scheme that makes good use of its dramatic nave and ambulatory alcoves. While the former plays host to a moveable seating and table system, the latter serves a series of stationary lounges. Together, they set the stage for anything from film-screenings to hackathons. 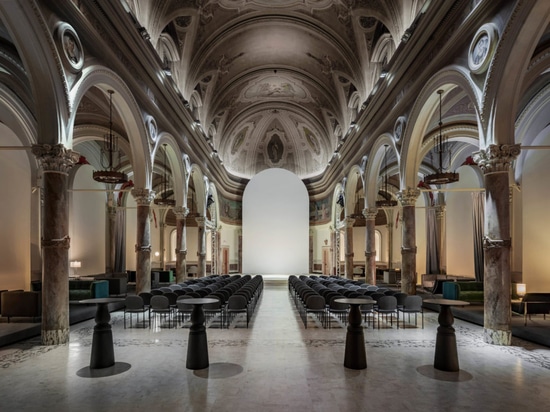 While the main nave of the church serves as an impromptu auditorium, it's ambulatory alcoves are fitted out as stationary lounges