Early works are set to begin on the $176 million redevelopment of the Cairns Convention Centre, with the original architect of the centre, Cox Architecture, leading the design.

Built in two stages in 1996 and 2000, the distinctive convention centre was the second major Queensland project for Cox Architecture’s Brisbane studio (then Cox Rayner Architects) after the Brisbane Convention and Exhibition Centre.

The Queensland government unveiled concept designs for the expansion in 2017. Lendlease has been appointed to lead the construction. The revamped centre, which will include 3,000 square metres of new exhibition space and meeting rooms, is scheduled to open in early 2022.

Queensland premier Annastacia Palaszczuk said the expansion would “help the city attract new conferences and events of even greater sizes and complexity which will ensure Cairns has a competitive advantage and pride of place on the global conventions calendar.”

The expansion includes a new entry, a large-scale green wall and a rooftop “banqueting space” with capacity for 410 people. There will be space for 30 exhibitors’ booths and three meeting rooms covering 420 square metres.

Cox Architecture’s original design for the centre was celebrated for its sustainability advancements, including its concertina roof, which funnels tropical downpours into a 115,000 litre tank used to water the surrounding garden, a solar hot water system and extensive use of sensor-controlled sun louvres.

A proposed green wall is intended to build on its sustainability credentials, and will provide microclimate benefits while giving the centre a distinctive, tropical aesthetic.

The first phase of convention centre works will include lift upgrades, with the centre remaining remain open until May 2020.

The centre will then close until October to allow for the replacement of the roof, air conditioning and amenities upgrades, and general refurbishment work.

Queensland public works minister Mick de Brenni said, “Our aim is to ensure the expansion works cause as little disruption to centre operations as possible and early in 2022, the expanded Cairns Convention Centre will officially re-open bigger and better than ever.” 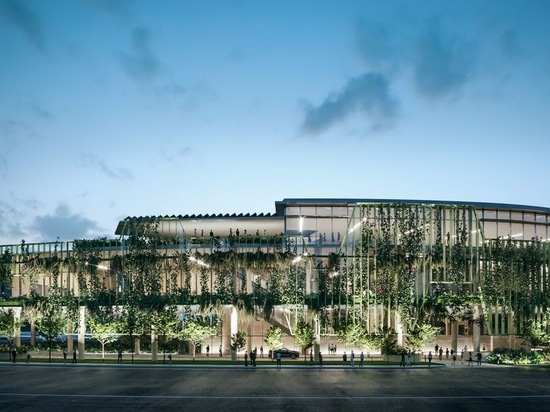