Heritage church hall to be replaced with towers

The Anglican Diocese of Sydney has put forward an ambitious proposal to build two towers of 43 and 45 storeys at the site of St John’s Cathedral in Parramatta, with Architectus leading the initial design work.

Occupying a prominent site in the heart of Parramatta, St John’s Cathedral is Australia’s oldest church site in continuous use. It was established in 1796 as a makeshift timber building.

The planning proposal, approved by Parramatta council’s local planning panel on 3 December, would clear the way for a new square to be built around the church, which would be open to the public but owned by the church. To the north of the square, a 45-storey tower would include 4,000 square metres dedicated to church use and 44,000 square metres of office space. A southern tower of 43-storeys would house 15,000 square metres residential accommodation.

Architectus’s masterplan for the site envisions that the final design of the towers be selected via a design competition. The masterplan states that the plan for the cathedral would “align it with the new Parramatta.

To make way for the office tower, the heritage-listed Memorial Church Hall (1910), in the north-west corner of the Centennial Square, would be demolished.

The city’s heritage advisory committee opposes the proposal, noting its “grave concern on the impact of this development especially regarding the scale of the development, impact on major community open space and the change in amenity from a religious/community gathering point”.

For its part, the church argues that the hall has continuously evolved over time to support the needs of the church congregation and needs to evolve again to meet modern day requirements. It says that in order to make its 100 year masterplan financially viable it needs to be able to develop a commercial office building.

“Removing the church hall will allow for the new civic space to be larger, better connected to other civic space around the church and to Centenary Square,” the planning application states.

Cheryl Bates, president of the National Trust Parramatta, spoke against the proposal at the local planning panel meeting on 3 December.

While the local planning panel has recommended that council approve the planning amendments, it stated the panel “did not consider the delisting of a heritage item as an appropriate course of action.” 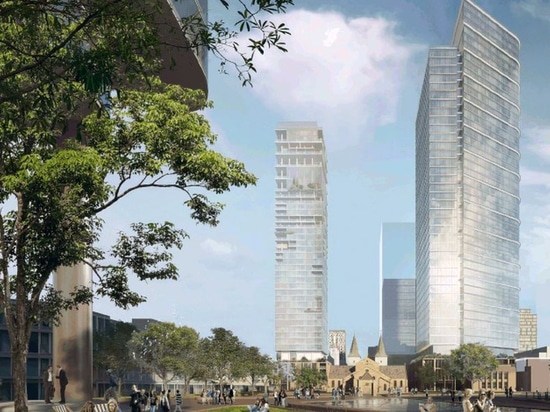 An early indicative design for the proposed towers at St John’s Cathedral in Parramatta. 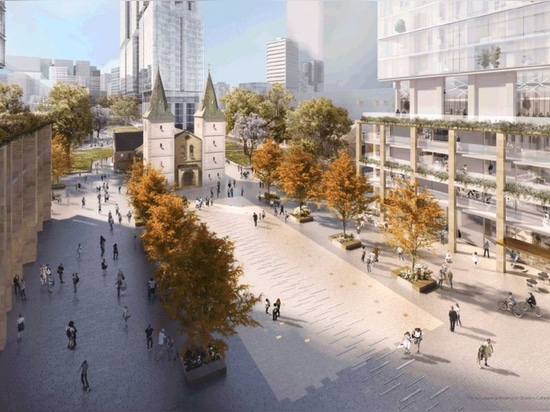