A duo of apartments in Moldova showcase contrasting interior design

Italian brand Living Divani decks out two homes in Moldova, a white penthouse and monochrome flat – both realised by linearchitects

In Moldova, two seemingly different apartments have something in common. Local design studio linearchitects marks the duo of spaces with strong interior identities – ‘rigorous and relaxing’ – with contrasting palettes in each location. These characteristics have been achieved with Italian brand Living Divani’s contemporary wares.

The eastern European country is known for its soviet-style architecture, and the first apartment residing in the capital of Chisinau captures some of this Brutalist energy. Titled ‘Monochrome’, the 82 sq m cove has a greyscale look created by the practice led by Dmitry and Egor Petrov. The shady tones are sensual – the bold and darkly dressed walls are complimented by subtle product interventions.

Mainly constructed from wood, glass and plaster, the one bedroom home follows a minimalist philosophy – a lifestyle of the owners ‘no more, no less.’ With this in mind, Piero Lissoni’s modular Neowall sofa is paired with curvaceous Grace chairs by Giopato & Coombes in the common area. Amongst the grey gradients, there is a hint of subtle colour from the 2017 Flow rocking chair by Shibuleru, in a camel leather. Meanwhile the 2013 Rod Bed by Lissoni adorns the bedroom, that has a mirrored built-in wardrobe for the feeling of extra space.

Linearchitects delivers a clinical space for the penthouse in Moldova, titled White Attic. Structured with light wood flooring, a geometrical ceiling and curtains that give the interior architecture a softer edge, the clean canvas forms a heavenly aura.

‘We developed our view of the interiors and it was not difficult for us to create two contrasting interiors, although in our opinion they are very similar and are built on the same principles, and colour, texture, material and interior filling are just a matter of taste and preference,’ Dmitry and Egor Petrov say of the project. Described as ‘ethereal and urban’, the two locations offer a new meaning to neutral, and promote the diversity of Living Divani’s dynamic and evolving range. 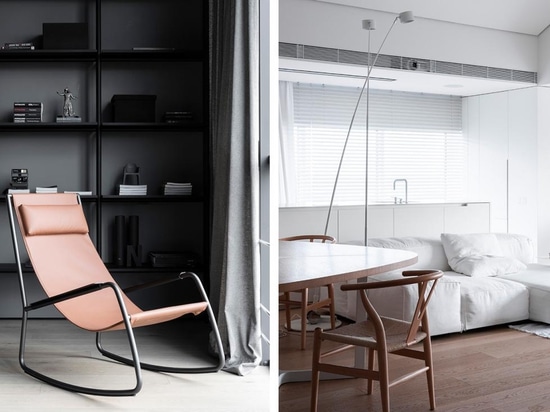 Monochrome and White Attic including the 2017 Flow rocking chair by Shibuleru and Wishbone Chairs by Hans J. Wegner. 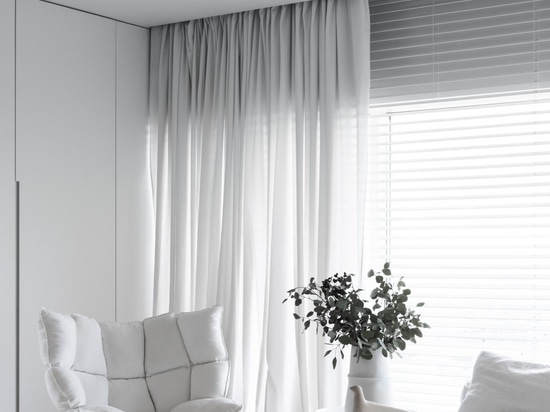 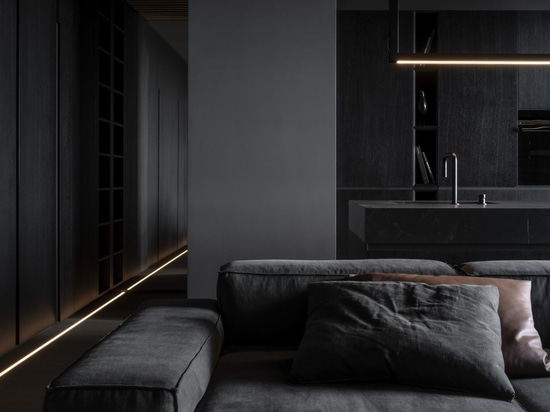 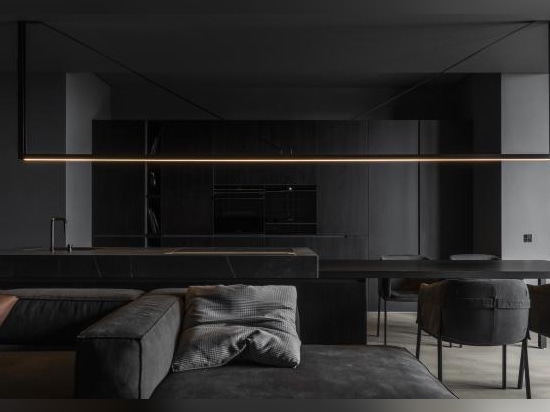 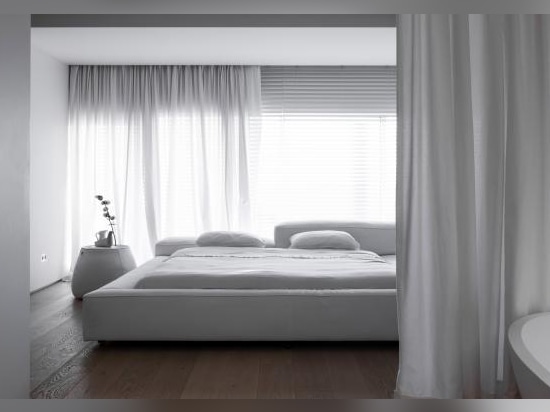