Real Madrid reveals a new look at its stadium overhaul

Real Madrid Club de Fútbol, the Spanish soccer club that calls its eponymous city home, has released a first look at the $622 million overhaul of its Santiago Bernabéu Stadium.

The reveal comes hot on the heels of OVG Manchester, a Populous-designed arena and the U.K.’s future largest indoor venue, also releasing renderings.

Rather than building a new stadium from the ground up, Real Madrid has opted to instead rehabilitate its 73-year-old home field, originally designed by architects Manuel Muñoz Monasterio and Luis Alemany Soler. However, the latest renovation is just the latest in a long line of them, as the stadium’s capacity has fluctuated over the years as it was modernized (and a mechanical retracting roof was added in the ’90s).

The project was started in 2018, and once complete, the 710,000-square-foot stadium will hold one less seat, bringing the capacity down to 81,043. In return, the venue’s height will be increased by 32 feet (10 meters), a new, shutter-like modern retractable roof will be added, and the facade, currently consisting of concrete colonnades, will be wrapped in 360 degrees of screens. The site will also gain a suite of new stores, a restaurant, and a new hotel. From the latest video released by the team on April 16, it appears that at least some of those amenity spaces will be located on the stadium’s upper floors, as diners can be seen lounging between supportive steel struts while enjoying views of Madrid’s skyline.

Once complete, despite its “diminished” capacity, Santiago Bernabéu will remain Spain’s second-largest stadium. The area around the stadium itself is also being reconfigured and will become 65,000 square feet of gardens. Overall, the team hopes that the renovations will draw tourists year-round—similar experiments are going on not only in Europe but are gaining steam across America, as football and baseball stadiums shift to supplement their offerings with non-sports opportunities. 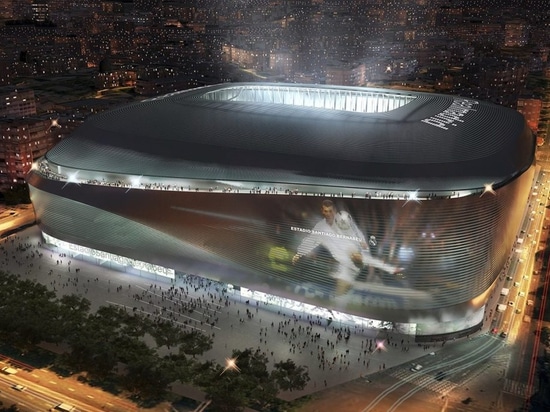 Once complete, the renovation will see the stadium wrapped in video screens. 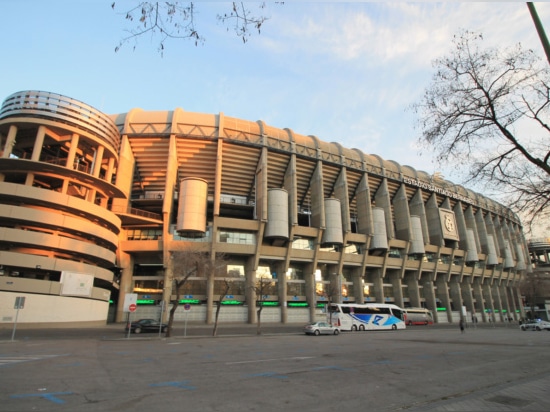 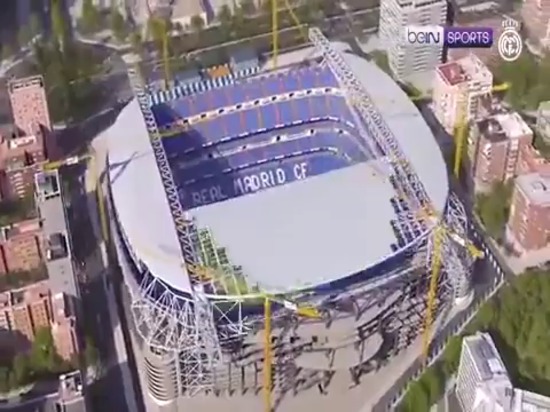