A year after New York’s Governor Cuomo superseded an MTA plan that would have closed the Canarsie Tunnel that runs between Brooklyn and Manhattan entirely for 15 months, repairs to the L Train-carrying tunnel are complete.

The governor touted his success this past Sunday, April 26, in an on-air press conference filled with the types of informative slides that have captured the internet’s imagination during quarantine. According to Governor Cuomo, it took only 12 months to complete the shoring up of the tunnel, which was flooded by Hurricane Sandy in 2012, instead of the originally anticipated 15 months. That’s down from what the MTA had originally proposed; either closing the crossing entirely for 15 months to repair the concrete bench walls lining the tunnel, or operate on a reduced service schedule and work on the weekends for up to 3 years.

Cuomo also took a swing at naysayers who predicted his plan wouldn’t work, or that predicted an L Train shutdown would be a disaster.

“The opposition to this new idea was an explosion,” said the governor on Sunday. “I was a meddler, I didn’t have an engineering degree, they were outside experts, how dare you question the bureaucracy, the bureaucracy knows better. It was a thunderstorm of opposition. but we did it anyway, and we went ahead with it. And we rebuilt the tunnel, and the tunnel is now done better than before, with all these new techniques. It opens today.

“It opens today not in 15 months, but actually in only 12 months of a partial shutdown. So it’s ahead of schedule, it’s under budget, and it was never shut down. I relay this story because you can question and you should question why we do what we do. Why do we do it that way? I know that’s how we’ve always done it, but why do we do it that way? And why can’t we do it a different way?”

However, while the repairs were completed much quicker than anticipated, the technology being used hasn’t necessarily been tested for the long haul. Instead of replacing the tunnel’s concrete bench walls, they’ve been covered in a structural fiberglass wrap that was adhered with polymers and mechanical fasteners; the walls were then rigged a fiber optic monitoring system that will allow engineers to pinpoint any future shifts or collapses.

During construction, which began in April of last year, the L Train ran in 20 minute intervals between Brooklyn and Manhattan, leading to overcrowding on both the platforms and trains for the line’s 400,000 daily commuters. Although tunnel repairs are complete and the subway line’s schedule should have returned to normal, there are still a few ongoing station and electrical substation upgrades in the works. Ironically, thanks to coronavirus, most subway lines are now running on a limited schedule. 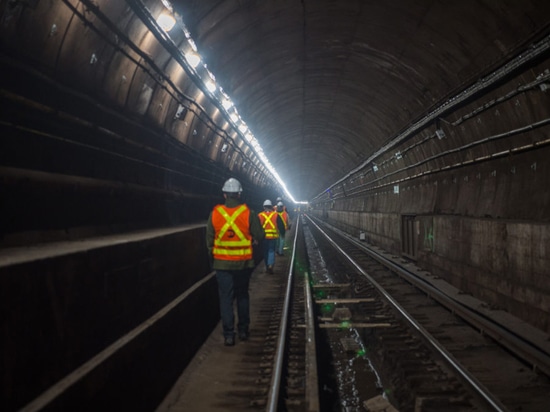 Construction workers putting the finishing touches on the Canarsie Tunnel in March of this year. 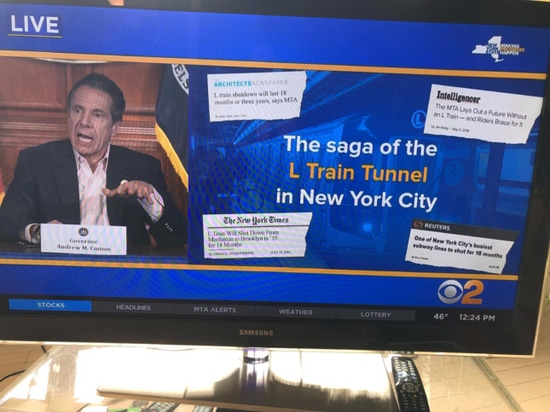 Cuomo took a not-so-subtle swing at naysayers during the press conference.