City of Parramatta has released new vision and detailed design of the city’s proposed aquatic and leisure centre as part of a development application for the project.

The project will be located in the Mays Hill Precinct of Parramatta Park – an 85-hectare stretch of parkland that includes the World Heritage-listed Old Government House and Domain.

The ring-shaped design is intended to sensitively integrate the building with the surrounding landscape. Andrew Burges told ArchitectureAU the circular design also forms a substantial fence around the pool. “It turned a concept of the enclosure into an element that we could also program as circulation, shade, and something that is very multifunctional,” he said.

The design also works to minimize noise and reduce impact on nearby residents, and, it provides sightlines for better supervision across the facility.

Grimshaw, Andrew Burges Architects and McGregor Coxall won an international design excellence competition for the project in June 2018. Their winning design was first revealed in September 2019 following a protracted funding dispute between the council and the state government. They eventually agreed to jointly fund the $77 million project equally to the tune of $38.5 million each.

“The submission of the development application for the aquatic and leisure centre marks another key step forward for this much anticipated projects. It’s quite exciting to see it all coming together,” said Parramatta lord mayor Bob Dwyer.

“The people of Parramatta are key to see this significant community facility built, and council is working hard to deliver it as soon as possible.”

Acting sports minister Geoff Lee added, “Today we are a step closer in our partnership with Parramatta Council to delivering a state-of-the-art sporting and recreation facility for Western Sydney. This aquatic centre will cater for competition, learn to swim classes, recreation and relaxation and will be the pride of Parramatta.” 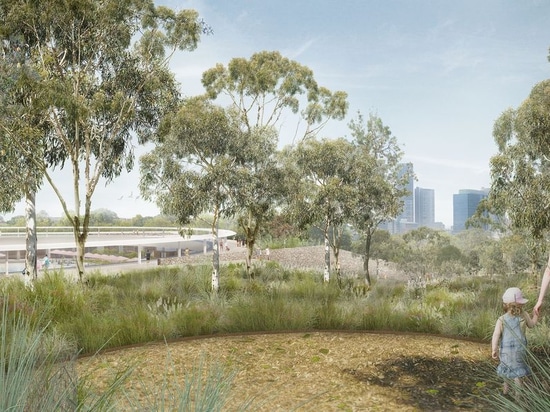