Hawkins\Brown is bringing a dusky mixed-use complex to L.A.

Right at the corner of Vine Street and La Miranda Avenue in Los Angeles will soon rise 1235 Vine Street, a mixed-use complex with a robust street-level colonnade courtesy of the (originally) U.K.-based Hawkins\Brown.

1235 Vine St. is the firm’s second major mixed-use project going up in Hollywood at the moment, the other being 1000 Seward Street, an assemblage of cantilevered boxes that will hold office space for “creatives” once complete.

The two projects, although similar in function, couldn’t be more different in form. The tripartite volumes of 1235 Vine St. were staggered in such a way as to present the tallest portion facing Vine Street, while gradually stepping down and tapering to match the shorter bungalows to the east. All three sections of the complex will rest on top of a unifying plinth, which will be wrapped by the project’s most distinctive feature, the aforementioned street-facing archways. Besides showcasing the expected restaurant and commercial lobby, the colonnade was intended to break up the rigid window grid above by referencing the Taglyan Cultural Complex across the avenue.

The use of tinted concrete for the facade, which (from the renderings provided) seems to resemble more “Ruby City without the aggregate” than firehouse-red, will also help set 1235 Vine St. apart from its neighbors. Perforated metal panels will also be inset into the single-height window apertures to help delineate the project from similar office buildings, as well as provide some measure of passive solar shading.

Once complete, the 117,000-square-foot project will bring 109,100-square-feet of Class-A office space for creative industries to the neighborhood, as well as a 4-story below-ground parking area with 232 spots, and a number of roof terraces that will take advantage of the building’s offset volumes. 1235 Vine Street is still slated for completion in 2022. 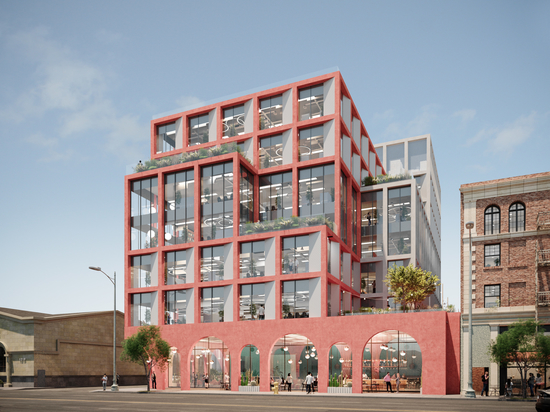 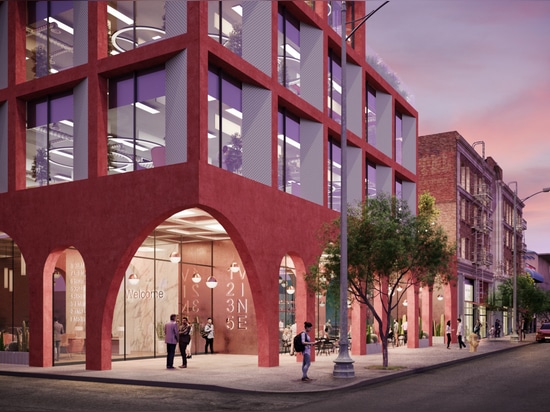 A rendering of the ground-level colonnade, which is intended to help encourage foot traffic to the forthcoming restaurant slated for the site. Note the coffered ceilings. 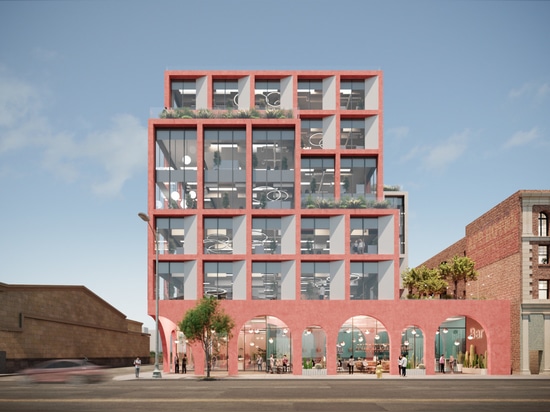